Comments (0)
Add to wishlistDelete from wishlist
Cite this document
Summary
In seeking a scrutiny at individual rights and how they merge with the National Security presents a paradox which claims that avenues are often crafted that propagate terror which broods in the liberty bestowed by democracies…
Download full paperFile format: .doc, available for editing
HIDE THIS PAPERGRAB THE BEST PAPER94.1% of users find it useful 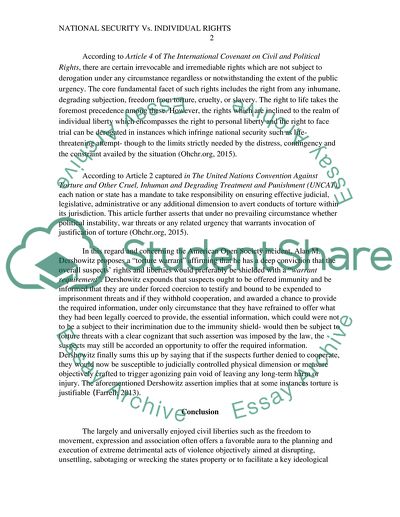 National Security vs. Individual Rights al Affiliation Introduction In seeking a scrutiny at individual rights and how they merge with the National Security presents a paradox which claims that avenues are often crafted that propagate terror which broods in the liberty bestowed by democracies. According to Kettl, (2013), American citizens treasure freedom of movement. The key dilemma resonates on the extent the government should intrude, interfere or compromise with its citizens lives in its pursuit to offer national security to the same citizens. The fundamental core objective of this paper is to screen and probe at the tenets of the legal response of the terrorism jurisdictions portrayed on the United States response to the Open Society attacks (pg 161).
On the contest of seeking to unearth the delicate equilibrium between citizens’ rights and the concern on national security, Kettl expounds on the terrorist attacks which were opportunistic of the America’s open society as they stage-managed their mass murder incursion on the World Trade Centre and the Pentagon. Deep scrutiny on the predicament unravelled that the roots of this incident encompassed the effortless and accessible means and avenues to obtain passports to foreigners. It was also unravelled that key American immigration sites were often jeopardized by lack of resolute scrutiny. On this concern, President Bush reiterated to the attack urging American Citizens to deliver terrorists to the state authorities altogether with their respective ring leaders or opting to succumb into the terrorists snare. The U.S went further to imprison the captured terrorists at Guantanamo Bay, hence evading the Geneva Convention restriction (Kettl, 2013, pg 162).

The aftermath of this terror attack resulted to arrests of the terrorists’ suspects who underwent “enhanced torture” as a means of probing for evidence for their involvement in the said attacks. The key concern still remains whether this was the appropriate action and if the affirmative wins, then, to what extend should this “liberty” be expended. Human liberties and rights are acknowledged as universal and inherent, but that does not highlight that they cannot be restricted under any incident, occurrence or circumstance- a key note reality that is acknowledged by the bounds and confines of non-derogable and derogable rights (Kettl, 2013, pg 164).
According to Article 4 of The International Covenant on Civil and Political Rights, there are certain irrevocable and irremediable rights which are not subject to derogation under any circumstance regardless or notwithstanding the extent of the public urgency. The core fundamental facet of such rights includes the right from any inhumane, degrading subjection, freedom from torture, cruelty, or slavery. The right to life takes the foremost precedence among these. However, the rights which are inclined to the realm of individual liberty which encompasses the right to personal liberty and the right to face trial can be derogated in instances which infringe national security such as life-threatening attempt- though to the limits strictly needed by the distress, contingency and the constraint availed by the situation (Ohchr.org, 2015).
According to Article 2 captured in The United Nations Convention Against Torture and Other Cruel, Inhuman and Degrading Treatment and Punishment (UNCAT), each nation or state has a mandate to take responsibility on ensuring effective judicial, legislative, administrative or any additional dimension to avert conducts of torture within its jurisdiction. This article further asserts that under no prevailing circumstance whether political instability, war threats or any related urgency that warrants invocation of justification of torture (Ohchr.org, 2015).
In this regard and concerning the American Open Society incident, Alan M. Dershowitz proposes a “torture warrant” affirming that he has a deep conviction that the overall suspects’ rights and liberties would preferably be shielded with a “warrant requirement”. Dershowitz expounds that suspects ought to be offered immunity and be informed that they are under forced coercion to testify and bound to be expended to imprisonment threats and if they withhold cooperation, and awarded a chance to provide the required information, under only circumstance that they have refrained to offer what they had been legally coerced to provide, the essential information, which could were not to be a subject to their incrimination due to the immunity shield- would then be subject to torture threats with a clear cognizant that such assertion was imposed by the law, the suspects may still be accorded an opportunity to offer the required information. Dershowitz finally sums this up by saying that if the suspects further denied to cooperate, they would now be susceptible to judicially controlled physical dimension or measure objectively crafted to trigger agonizing pain void of leaving any long-term harm or injury. The aforementioned Dershowitz assertion implies that at some instances torture is justifiable (Farrell, 2013).
Conclusion
The largely and universally enjoyed civil liberties such as the freedom to movement, expression and association often offers a favorable aura to the planning and execution of extreme detrimental acts of violence objectively aimed at disrupting, unsettling, sabotaging or wrecking the states property or to facilitate a key ideological end and hence a clear demarcation of the delicate equilibrium between civil liberties and the national security ought to be drawn. In this regard, it’s paramount to note that although human rights are inherent, there are specific instances which allow expedition of torture threats and controlled pain to elicit key information necessary to deduce their involvement in a felony which is subject to national instability or any such related public urgency (Margulies, 2006).
REFERENCES
Farrell, M. (2013). The prohibition of torture in exceptional circumstances.
Kettl, D. F. (2013). System under stress: The challenge to 21st century governance.
Margulies, J. (2006). Guantánamo and the abuse of presidential power. New York: Simon & Schuster.
Ohchr.org,. (2015). Convention against Torture. Retrieved 22 November 2015, from http://www.ohchr.org/EN/ProfessionalInterest/Pages/CAT.aspx
Ohchr.org,. (2015). International Covenant on Civil and Political Rights. Retrieved 22 November 2015, from http://www.ohchr.org/en/professionalinterest/pages/ccpr.aspx Read More
Share:
Tags
Cite this document
(“National Security vs. Individual Rights Essay Example | Topics and Well Written Essays - 250 words”, n.d.)
National Security vs. Individual Rights Essay Example | Topics and Well Written Essays - 250 words. Retrieved from https://studentshare.org/social-science/1702041-national-security-vs-individual-rights

CHECK THESE SAMPLES OF National Security vs. Individual Rights

...? Personal Privacy VS National Security Personal Privacy VS National Security In the world today it is seen that the acts ofterrorism have increased to the extent that they are interfering with the daily routine of human beings either directly or indirectly. It is because of this reason that several measures have been taken by the governments to ensure a terrorism free world. This situation has led to a confusion between the governmental agencies as to how much they should interfere in the lives of individuals. Because of this very reason different opinions have been formed regarding the methods which should be adopted to avert terrorism. Moreover it is seen that the roots of terrorism extend up to the general population and hence...
7 Pages(1750 words)Research Paper

... of the island. This implies that the elders who have had the autonomous rule in the island will have to adjust their style of leadership when devising laws for use in the island. They will no longer determine the values of the people in the island. However, they will influence the formulation of the statement of individual rights. Analysis of the legal and political philosophical principles at the Nation of Tagg The elders will find it difficult to continue with their administration using their “top down” approach because of growth in the population. They will have to acknowledge the changes that come with diversity. As such, the council of elders will no longer dictate to the people “the statement of their rights”. Instead, individual...
8 Pages(2000 words)Essay

According to the discussion findings the term terrorism is politically and psychologically charged, and this to a great extent compounds the complicatedness of providing an accurate definition. In 1988, one study by the US Army established that over hundred definitions of the utterance terrorism have been used. A person who applies terrorism is a terrorist. The idea of terrorism is itself contentious for the reason that it is frequently used by states to delegitimise political adversary, and hence legitimize the state's own employ of terror adjacent to those opponents.
As the paper declares terrorism has been second-hand by a wide array of political organizations in getting more to their objectives; together right and left-win...
10 Pages(2500 words)Essay

...Legally Observing Individual Rights As citizens in the United s, that are certain freedoms for which each individual are guaranteed under the stated laws of the land. One of those freedoms so entitled to is that of being told, when approached by those in law enforcement with the intent of placing into custody, the rights we have to such things as to remain silent or also our right to legal representation. Just one of the definitions of rights according to law.com is as follows, "plural of right, which is the collection of entitlements which a person may have and which are protected by the government and the courts or under an agreement (contract)," (Law.com, p.1). One of those such rights would be the Miranda rights. In defining them...
4 Pages(1000 words)Assignment

...﻿Brazil - Individual vs Collective Culture is defined as the knowledge and uniqueness of any particular group or set of people characterized by various aspects including social habits, language, arts, music or religion. It can also be described as the development of a group of persons through socialization cultivated by the social patterns of that particular group. With regard to Brazil, its culture is among the world’s most diverse due to many years of being under European domination and the aspect of slavery (Gorga, n.d.), which introduced many African immigrants who brought their various cultures and influenced the ideas and ways of life of the Brazilians. The Brazilian people also embraced the European cultures and innovations...
2 Pages(500 words)Assignment
sponsored ads
Save Your Time for More Important Things
Let us write or edit the essay on your topic "National Security vs. Individual Rights" with a personal 20% discount.
GRAB THE BEST PAPER

Let us find you another Essay on topic National Security vs. Individual Rights for FREE!