Comments (0)
Add to wishlistDelete from wishlist
Cite this document
Summary
Th paper "John Locke’s and Aristotle’s Understanding of Moral Life" is aimed to give an analysis of similarities and differences between John Locke and Aristotle’s understanding of moral life and model of governance. This included an examination of rights that should be accorded to the people…
Download full paperFile format: .doc, available for editing
HIDE THIS PAPERGRAB THE BEST PAPER94.6% of users find it useful 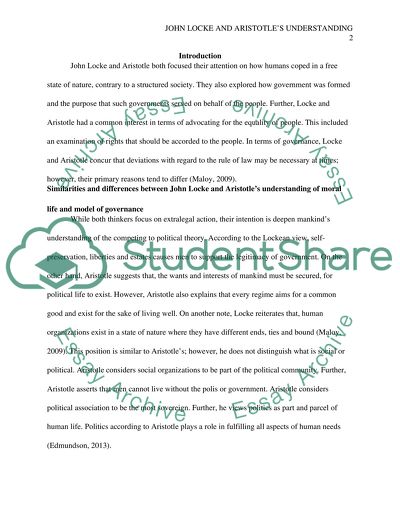 John Locke and Aristotle’s understanding of moral life and model of governance Introduction John Locke and Aristotle both focused their attention on how humans coped in a free state of nature, contrary to a structured society. They also explored how government was formed and the purpose that such governments served on behalf of the people. Further, Locke and Aristotle had a common interest in terms of advocating for the equality of people. This included an examination of rights that should be accorded to the people. In terms of governance, Locke and Aristotle concur that deviations with regard to the rule of law may be necessary at times; however, their primary reasons tend to differ (Maloy, 2009).
Similarities and differences between John Locke and Aristotle’s understanding of moral life and model of governance
While both thinkers focus on extralegal action, their intention is deepen mankind’s understanding of the competing to political theory. According to the Lockean view, self-preservation, liberties and estates causes men to support the legitimacy of government. On the other hand, Aristotle suggests that, the wants and interests of mankind must be secured, for political life to exist. However, Aristotle also explains that every regime aims for a common good and exist for the sake of living well. On another note, Locke reiterates that, human organizations exist in a state of nature where they have different ends, ties and bound (Maloy, 2009). This position is similar to Aristotle’s; however, he does not distinguish what is social or political. Aristotle considers social organizations to be part of the political community. Further, Aristotle asserts that men cannot live without the polis or government. Aristotle considers political association to be the most sovereign. Further, he views politics as part and parcel of human life. Politics according to Aristotle plays a role in fulfilling all aspects of human needs (Edmundson, 2013).
Conversely, Locke differentiates social and political and suggests that while men are social by nature, their politics is not guided by nature. Locke further states that government is also not natural and its role is limited when it comes to serving human interests. Locke considers salvation to be the most important good and is not influenced by the government. According to Locke, the non-governmental organizations tend to be more effective in realizing most human goals. He considers an open and voluntary society as necessary to enhance the free exploration of competing ideas. Locke further views smaller organizations to be less dangerous compared to the government. The smaller institutions do not have absolute power, and as such, are not in a position to coerce others (Forde, 2011).
Conclusion
While Aristotle considers polis to be social and natural, Locke, on the other hand, views government as an institution that should serve the people. He further views the government as an institution that should enforce natural laws. According to Locke, governments should exist because not every person obeys the law. On the other hand, while Locke’s notion of virtue is similar to Aristotle’s view of individual excellence, Locke’s idea of political power is still narrow compared to Aristotle’s. On the other hand, Aristotle contends that political interaction is a necessity to achieve virtue.
References
Edmundson, W.A. (2013).Politics in a State of Nature. Ratio Juris, 26(2), 149-186.
Forde, S. (2011). “Mixed Modes” in John Lockes Moral and Political Philosophy. Review of
Politics, 73(4), 581-608.
Maloy, J.S. (2009).The Aristotelianism of Lockes Politics. Journal of the History of Ideas,
70(2), 235-257. Read More
Share:
Tags
Cite this document
(“John Lockes and Aristotles Understanding of Moral Life Essay”, n.d.)
Retrieved from https://studentshare.org/social-science/1700208-john-lockes-and-aristotles-understanding-of-moral-life

Natural rights in John Lockes, the second treatise on government

As such, everyone is entitled to enforce natural law in order to uphold these rights. Secondly, he purports that as an individual ventures into societal relationship with others, he trades what goods he possesses for goods he does not, and as such forms a reason to formulate methods to facilitate the trade of goods, such as the use of money, since money is non-perishable in contrast with food. As such, when money is injected into the system, individuals may pertain to give up their natural rights in order to be governed by a select group of people who exist solely to protect their welfare and property. These representatives work by introducing a system of laws and rules that expand over the societies they govern, and are in charg...
3 Pages(750 words)Essay

...? Natural Environment in Steinbeck’s Fingers of Cloud To pursue absolutes in the spirit of criticism is always dangerous (and often a mistake), but it seems safe to say that of all twentieth century American writers, John Steinbeck most embraced, cherished, and understood the natural environment. A writer and a naturalist, influenced and influential, Steinbeck wrote of lands he loved, most of all the intricate and subjective puzzle of his Salinas Valley home. What this paper aims to uncover-or, as Steinbeck would have likely preferred, discover- ­is how Steinbeck's treatment of the natural environment evolved throughout his life by examining "Fingers of Cloud," the first story Steinbeck ever published. Published in the Stanford Spectator...
5 Pages(1250 words)Essay

... Some People claim that moral life is based on personal feelings and individual decisions; others prefer to reduce morality to laws and commandments. Firstly, we should figure out what ‘moral’ really means; so basically moral refers to a person’s sense of right and wrong. In other words, it can be called our ethics, virtue, principles and goodness. The multi-cultural world that we live in today, morality has become a very complicated issue. Morality is a system of behavior in consideration with standards of right or wrong behavior. It speaks of three things, moral standards, moral responsibility and moral identity. (Design. Morality 2013) When we claim that we want to lead a moral life, it means that we want to lead a life which embodies...
4 Pages(1000 words)Essay

...Aristotle's Views Aristotle was a Greek philosopher, physicist, poet and a popular of Plato and teacher of Alexander the Great (Wikimedia Foundation, Inc). He was able to produce books such as Nichomachean Ethics which describes the "happy life intended for one by nature as one lived in accordance with virtue" and Politics which gives analysis on political community (Clayton). As a philosopher and a political scientist, Aristotle was able to observe communities so that he was able to describe the relationship of men, especially to his community. One of his famous lines says that, "the man who is incapable of working in common, or who in his self-sufficiency has no need of others, is no part of the community, like a beast or a god...
3 Pages(750 words)Essay

...Mimesis or imitation is viewed as a representation of nature. In Poetics, Aristotle speaks of Tragedy as a form of imitation that is produced by a combination of rhythm, tune and meter. It is an imitation not only of a complete action but of events inspiring fear or pity. 'Tragedy is an imitation, not of men, but of an action and of life, and life consists in action, and its end is a mode of action, not a quality.' Using Aristotle's logic, it then follows that the study of tragedy can be a medium through which people's lives may improve. While he stresses the importance of action in tragedy, he claims that it is the plot which is the most important thing in the genre. One of the implications of Aristotle's Poetics is that for a tragedy...
3 Pages(750 words)Assignment

...Aristotle's Politics Aristotle's Politics, written around 350 BCE, enquires into how best people should be governed. It touches on a variety of subjects-the nature of a household and a state, and the differences between running a household and a state; what makes a person a slave, and who is a free person; are some people born to be slaves; the relationship between a master and a slave; the economic life of a state, and how wealth is created; who is better suited to rule-the man of action or the thinker; is it better to be a man of action or is it better to be a thinker; what kind of education should be given to the young. And so on. The core of this discussion centers on how to have a good life-how the state can contribute to a better...
6 Pages(1500 words)Essay

... Aristotle Slavery Aristotle permits as persuasive indeterminacies between logic and rhetoric, between the literal and the figurative, between philosophy and philology. We need to be Pickwickian philosophers to understand him. Philosophers say Pickwick are too often content with examining the things that lie before them without looking to the truths that are hidden beyond. Aristotle states that a slave is a possession, “A possession is something we use and a slave belongs to us. “Aristotle says a slave is a man with conscious for an animal like a sheep and cannot be enslaved. The bodily parts such as arm, leg, hand, and eye that he uses in the service of all even if it is the hand he raises to deflect a blow from the master. Aristotle...
15 Pages(3750 words)Essay

...﻿Introduction Butts (2006) explain that the concept of morality is borrowed from the Latin word, denoted as “moralis”. He further goes on to denote that it means a message or lesson that is learnt, through an outcome of a given event, or a narration (Butts, 2006). It majorly concerns or relates to what is considered right or wrong in society. Morals are passed from one individual to another is society through socialization which is one of the key functions of the various institutions that exists in society namely the family, religion, the school and many more. These institutions majorly use literature among the very many medium that exist to pass down morals from one generation to another.Going through...
6 Pages(1500 words)Coursework
sponsored ads
Save Your Time for More Important Things
Let us write or edit the essay on your topic "John Lockes and Aristotles Understanding of Moral Life" with a personal 20% discount.
GRAB THE BEST PAPER

Let us find you another Essay on topic John Lockes and Aristotles Understanding of Moral Life for FREE!