Comments (0)
Add to wishlistDelete from wishlist
Cite this document
Summary
Usual economic laws that are applied within national boundaries have gone into disarray. When global trade was minimal, imports were not disrupting local economies. K-PAN was doing well for as long as 50 years; however, things…
Download full paperFile format: .doc, available for editing
HIDE THIS PAPERGRAB THE BEST PAPER91.2% of users find it useful 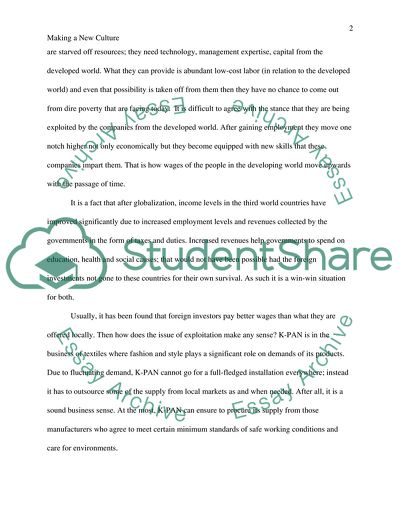 Making a New Culture Globalization has put the whole world into turmoil. Usual economic laws that are applied within national boundaries have gone into disarray. When global trade was minimal, imports were not disrupting local economies. K-PAN was doing well for as long as 50 years; however, things changed when foreign textile goods began making inroads into the US markets. Consumers patronize those firms who offer goods at the lowest keeping quality of the goods, more or less, at par with other well-established reputed players. That is a harsh reality of the market economy. The writers of the article want to suggest that it is unethical on part of K-PAN to outsource the goods from low-wage countries where working conditions are dismal.
Before accepting or rejecting such stance, it is important to understand the economic conditions that prevail in the developing countries.
K-PAN moved to Nicaragua establishing its manufacturing facilities and outsourced its major supply from Indonesia and Pakistan. K-PAN just followed the good economics that supports the principle of comparative advantage. After all “Survival of the Fittest” is the natural law. Per capita incomes in developing countries usually range between one-tenth and one-fifth of that prevails in the developed world. Due to this, services are significantly cheaper in those countries when compared with those that prevail in the developed world. That is why the World Bank measures incomes of the people in developing countries in terms of purchasing power rather than at exchange rates of currencies.
Developed countries have not reached to their current state overnight; they have also passed through the same path that developing countries are treading now. Developing countries are starved off resources; they need technology, management expertise, capital from the developed world. What they can provide is abundant low-cost labor (in relation to the developed world) and even that possibility is taken off from them then they have no chance to come out from dire poverty that are facing today. It is difficult to agree with the stance that they are being exploited by the companies from the developed world. After gaining employment they move one notch higher not only economically but they become equipped with new skills that these companies impart them. That is how wages of the people in the developing world move upwards with the passage of time.
It is a fact that after globalization, income levels in the third world countries have improved significantly due to increased employment levels and revenues collected by the governments in the form of taxes and duties. Increased revenues help governments to spend on education, health and social causes; that would not have been possible had the foreign investments not gone to these countries for their own survival. As such it is a win-win situation for both.
Usually, it has been found that foreign investors pay better wages than what they are offered locally. Then how does the issue of exploitation make any sense? K-PAN is in the business of textiles where fashion and style plays a significant role on demands of its products.
Due to fluctuating demand, K-PAN cannot go for a full-fledged installation everywhere; instead it has to outsource some of the supply from local markets as and when needed. After all, it is a sound business sense. At the most, K-PAN can ensure to procure its supply from those manufacturers who agree to meet certain minimum standards of safe working conditions and care for environments.
Outsourcing, per se, is not unethical in the sense as article attempts to presuppose as ethical manufacturers do exist in the developing world too who are equally eager to reduce emissions keeping environment safe and pollution free. What is needed is to enter into a long term contract with them so that they can make necessary investments and provide healthy working environment to their workers.
Reference
Baker, M., Hartman, L., Shaw, B. (1999). Globalization: Global Profits, Global Headaches.
University of Texas-Austin. Read More
Share:
Tags
Cite this document
(“Case Study: p.565 , Global Profits, Baker/Hartman/Shaw Book Report/Review”, n.d.)
Case Study: p.565 , Global Profits, Baker/Hartman/Shaw Book Report/Review. Retrieved from https://studentshare.org/social-science/1691326-case-study-p565-global-profits-bakerhartmanshaw

...?First Solar Turns Sunshine into Profits Case Summary First Solar is currently one of the world’s competitive producers of solar panels and solar cells. The company is seeking to expand its current market base to include North America and other parts of European. The company believes that it stands to again competitive advantage by virtue of the fact that it can depend on its manufacturing equipment to produce solar cells and panels that are of cheaper prices. They also have the advantage of the shift from the use non-renewable energy to renewal energy in Europe and the increasing cost of oil as some of the points they are depending on to create the new market. Key Marketing Issues As a new entrant to some of Europe’s and North America’s...
3 Pages(750 words)Case Study

Main products of Shaw Flooring involve carpets, area rugs, ceramic tiles, hardwood flooring, laminate flooring, and hardwood laminate flooring. Along with these other related products such as floor coverings of hardwood and vinyl also manufactured by them. Designing and manufacturing of both commercial and residential carpet products are carried on within the company’s owned facilities. The raw material used for carpet products is mainly tufted nylon yarn. For making carpet samples separate division are formed in the organization. The carpet sampling division provides service to its customers. By formulating samples of their own it becomes more cost-effective for the firm. For the distribution of finished products, direct...

Markets, Profits and Prices of Boeing

The production of commercial aircraft involves advanced technological process and highly automated sophisticated machinery, which should be very expensive. Other fixed cost components might include wages to executives, administrative and selling expenses, leases, etc. Overall, Boeing is expected to have a very high level of fixed costs.
“On the other hand, any costs that do vary with output, like materials and labor, are referred to as variable costs” (Barron, Lynch & Blanchard, 2003, p.241). The major variable costs for Boeing are materials used for aircraft production (i.e. steel), utilities and labor. It is stated in the article that there are more than 18,500 members of the International Association of Mach...
8 Pages(2000 words)Case Study

The Inquiries Presented to P&P Consulting

...﻿The Inquiries Presented to P&P Consulting P&P Consulting was called by the management of the XYZ Bank regarding the problems faced by the claimants due to non-transparent working environment of the XYZ Bank in practicing independent investigation of the claimants’ cases. The board has not been diligently pursuing the investigation of a number of cases, such as: Inquiry in Golf Link Project, Mexico Inquiry in Hydroelectric project, Argentina Inquiry in Hydroelectric project, Brazil P&P Consulting made a cursory survey related to the business operations of XYZ Bank before fixing an appointment with the stakeholders. However, the P&P Consulting needed some particular details of the bank’s development initiative mechanism before starting its...
7 Pages(1750 words)Case Study

...﻿In the case of Baker vs. Osborne Development Corp., Thomas Baker, a homeowner, brought suit against Osborne for defects in housing that Baker had purchased, and Osborne had constructed. However, Osborne had already enrolled the buyers in a Home Warranty program, administered by Home Buyers Warranty (HBW) that specifically told the homeowners that any disputes would be solved by arbitration. Baker (and others who had purchased the homes from Osborne) were all informed of this by HBW by separate booklet after signing the original contract. Baker and the others are not bound by the arbitration agreement because they did not directly agree to it, as well as the fact that they were never specifically informed of it by HBW. Even though in NCR...
1 Pages(250 words)Case Study

...﻿1. Was outsourcing the A/P project the right move for Tegan given the other possible alternatives? IT department of Tegan c.c.c. could have handled the A/P project by its own but its staff strength of 100 was divided equally for the rollout of its comprehensive SAP R-3 project and the rest of the information technology function management. The huge talent pool of Tegan was dedicated to the SAP R-3 project and only a few personnel of the IT department could be made available to rewrite the system. No expert of the originally developed A/P was available other than the singular name that was Julia Jones, as the personnel who developed the system had retired. Time was a big issue with Tegan t to be devoted to the A/P project (Upton...
5 Pages(1250 words)Case Study

Financial analysis is mostly done using the data collected from the annual reports of the company to forecast the company’s financial health. This can be done through a cautious examination of the trends in key financial data, comparison of financial numbers across companies and analysis of significant financial ratios.
This essay mainly aims to assess the financial as well as an operational state of the target firm against the comparable as well as the market portfolios. Data for four years have been taken to formulate the financial ratios and hence the profitability ratios on excel. With this information, a trend analysis has been carried out for both the companies while having a comparison between them. The companies a...
10 Pages(2500 words)Case Study

Interpretation of Financial Statements: Next Plc and Ted Baker Plc

The investors are more...