Comments (0)
Add to wishlistDelete from wishlist
Cite this document
Summary
The choice of the country is most probably wrong. India had already decided, back in 1970, to eliminate the patents on all drug products. This allowed the country to develop a very good or robust generics drug industry (ANI, 2011, p. 1). In a sense, the joint venture was…
Download full paperFile format: .doc, available for editing
HIDE THIS PAPERGRAB THE BEST PAPER98.5% of users find it useful 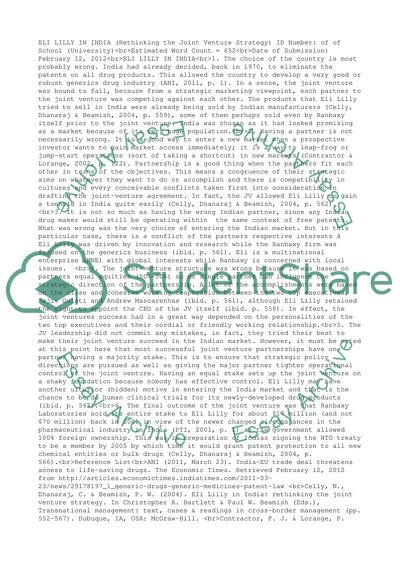 ELI LILLY IN INDIA (Rethinking the Joint Venture Strategy) ID Number: of of School (University)
Estimated Word Count = 652
Date of Submission: February 12, 2012
ELI LILLY IN INDIA
1. The choice of the country is most probably wrong. India had already decided, back in 1970, to eliminate the patents on all drug products. This allowed the country to develop a very good or robust generics drug industry (ANI, 2011, p. 1). In a sense, the joint venture was bound to fail, because from a strategic marketing viewpoint, each partner to the joint venture was competing against each other. The products that Eli Lilly tried to sell in India were already being sold by Indian manufacturers (Celly, Dhanaraj & Beamish, 2004, p. 559), some of them perhaps sold even by Ranbaxy itself prior to the joint venture. India was chosen as it had looked promising as a market because of its very huge population.
2. Having a partner is not necessarily wrong. It is a good way to enter a new market when a prospective investor wants to gain market access immediately; it is a way to leap-frog or jump-start operations (sort of taking a shortcut) in new markets (Contractor & Lorange, 2002, p. 122). Partnership is a good thing when the partners fit each other in terms of the objectives. This means a congruence of their strategic aims on whatever they want to do or accomplish and there is compatibility in cultures and every conceivable conflicts taken first into consideration in drafting the joint-venture agreement. In fact, the JV allowed Eli Lilly to gain a toehold in India quite easily (Celly, Dhanaraj & Beamish, 2004, p. 562).
3. It is not so much as having the wrong Indian partner, since any Indian drug maker would still be operating within the same context of free patents. What was wrong was the very choice of entering the Indian market. But in this particular case, there is a conflict of the partners respective interests – Eli Lilly was driven by innovation and research while the Ranbaxy firm was focused on the generics business (ibid. p. 561). Eli is a multinational enterprise (MNE) with global interests while Ranbaxy is concerned with local issues.
4. The joint-venture structure was wrong because it was based on partners equal equities (50%-50%) so no single partner can influence the strategic direction of the partnership. A lot of the accomplishments were based on the close and cohesive working cooperation between the two top executives, Rajiv Gulati and Andrew Mascarenhas (ibid. p. 561), although Eli Lilly retained the right to appoint the CEO of the JV itself (ibid. p. 558). In effect, the joint ventures success had in a great way depended on the personalities of the two top executives and their cordial or friendly working relationship.
5. The JV leadership did not commit any mistakes, in fact, they tried their best to make their joint venture succeed in the Indian market. However, it must be noted at this point here that most successful joint venture partnerships have one partner having a majority stake. This is to ensure that strategic policy directions are pursued as well as giving the major partner tighter operational control of the joint venture. Having an equal stake sets up the joint venture on a shaky foundation because nobody has effective control. Eli Lilly may have another ulterior (hidden) motive in entering the India market and that is the chance to be do human clinical trials for its newly-developed drug products (ibid. p. 562).
6. The final outcome of the joint venture was that Ranbaxy Laboratories sold its entire stake to Eli Lilly for about $17 million (and not $70 million) back in 2001 in view of the newer changed circumstances in the pharmaceutical industry in India (PTI, 2001, p. 1) as the government allowed 100% foreign ownership. This was in preparation of Indias signing the WTO treaty to be a member by 2005 by which time it would grant patent protection to all new chemical entities or bulk drugs (Celly, Dhanaraj & Beamish, 2004, p. 566).
Reference List
ANI (2011, March 23). India-EU trade deal threatens access to life-saving drugs. The Economic Times. Retrieved February 12, 2012 from http://articles.economictimes.indiatimes.com/2011-03-23/news/29178197_1_generic-drugs-generic-medicines-patent-law
Celly, N., Dhanaraj, C. & Beamish, P. W. (2004). Eli Lilly in India: rethinking the joint venture strategy. In Christopher A. Bartlett & Paul W. Beamish (Eds.), Transnational management: text, cases & readings in cross-border management (pp. 552-567). Dubuque, IA, USA: McGraw-Hill.
Contractor, F. J. & Lorange, P. (2002). Cooperative strategies in international business: joint ventures. Piscataway, NJ, USA: Rutgers University Press.
PTI (2001, July 06). Eli Lilly buys Ranbaxys stake in JV. The Hindu. Retrieved February 12, 2012 from http://hindu.com/2001/07/06/stories/06060006.htm Read More
Share:
Tags
Cite this document
(“Eli Lilly in India: Rethinking the Joint Venture Strategy Case Study”, n.d.)
Retrieved from https://studentshare.org/management/1588989-eli-lilly-in-india-rethinking-the-joint-venture-strategy

CHECK THESE SAMPLES OF Eli Lilly in India: Rethinking the Joint Venture Strategy

...? ENTREPRENEURSHIP JOINT VENTURE By Location The report delves in discussing the various financing options available to Thasta Beverage Company. Thasta is a startup company in the beverage market, which is exploring several financial options for financing the business. The various financing options that are discussed in the report include Venture capital, loans, debentures, owner’s capital, and grants. However, the report recommends Venture capital as the most viable option for the company due to its several merits discussed in the report. Contents Abstract 1 Contents 2 Introduction 3 Importance of venture and Working capital 4 Forms of business finance 4...
4 Pages(1000 words)Assignment

...Associated and Joint Venture This paper investigates the viability of Associates and Joint Venture as standard financial consolidation for accounting. It assesses the relevant IAS requirement to treat this reporting aspect as well as its alternative ways of reporting such arrangements with a special reference to HK listed companies namely Honda Motor Company and Hutchison Whampoa Limited. Order#: 171446 Deadline: 2007-06-03 12:37 Style: Harvard Language Style: English UK Pages: 10 Sources: 20 Writer ID: 6746 INTRODUCTION A joint venture is an entity formed between two or more parties to undertake economic activity together. The...
15 Pages(3750 words)Essay

...material locally at lower prices. Both companies have an online presence, which means their transaction capabilities are comparable, and both would benefit from it. V-Baby especially stand to gain from this, as Tots bots commands respect among most UK mothers, and any V-Baby products sold alongside Tots bots nappies will be well received. It is also well-worth considering that joint ventures are not very long term in nature, and may end in about eight to ten years. It is usual for one company to sell off its entire rights to the other for a handsome compensation. If V-Baby is willing to sell at the end of that period, it will be a good exit strategy for them to sell their company to Tots...
12 Pages(3000 words)Assignment

...Joint Venture A joint venture is also known as strategic alliance. Joint venture is a kind of partnership in which two or more businesses gather at one platform to share their expertise, markets, competencies, and accordingly their profits (Gould and Joyce). There can be different forms of joint ventures. Small firms commonly get together to undertake the industrial goliaths. Similarly, large firms may develop coalition with nimbler and quicker smaller businesses. In such cases, small companies find the benefit of having association with the big names in the industry that helps expand their geographic...
1 Pages(250 words)Essay

...Joint venture A joint venture is a business agreement undertaken mutually by two or more parties that otherwise maintains theiridentities. They start by the parties having an agreement or a contract that indicates their joint responsibilities, as well as goals. The contract is essential for preventing trouble later on; the parties should specify the intention of their joint venture along with its limitations. MGM Resorts International and Hakkasan Group today entered into a joint venture enterprise that deals with hotel management called MGM Hakkasan Hospitality. The strategic coalition...
1 Pages(250 words)Essay

...…………………………………………………………………………18 9. Appendix……………………………………………………………………………….20 2.0 Introduction The objective of this report is to formulate a human resource strategy for Sainsbury Plc. That will enable it to enter into joint ventures with other organizations in its global expansion programs. The report has made an in-depth analysis of the retail sector in the United Kingdom together with the general overview of the industry from a global perspective for it to recommend the course of action. Retail industry in the UK has been robust over the past five years with some ramifications shaping the industry. Ideally, there has been a strong sales momentum that has driven the volume of sales...
17 Pages(4250 words)Coursework
sponsored ads
Save Your Time for More Important Things
Let us write or edit the case study on your topic "Eli Lilly in India: Rethinking the Joint Venture Strategy" with a personal 20% discount.
GRAB THE BEST PAPER

Let us find you another Case Study on topic Eli Lilly in India: Rethinking the Joint Venture Strategy for FREE!