The Relationship Between Lobbying, Businesses And Political Decisions - Essay Example

Comments (0)
Add to wishlist Delete from wishlist
Cite this document
Summary
The researcher of this paper tries to scrutinize the relationship between lobbying, businesses and political decisions.  The idea of this research emerged from the author’s interest and fascination in how the government makes a profit from this…
Download full paper File format: .doc, available for editing
HIDE THIS PAPERGRAB THE BEST PAPER94.3% of users find it useful 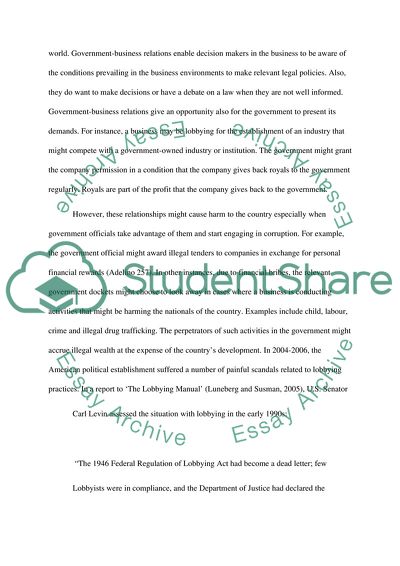 Extract of sample "The Relationship Between Lobbying, Businesses And Political Decisions"

﻿Why is Politics and Government Big Business?
Lobbying is the process of trying to influence the decisions made by an administration, for example, the government especially the members of legislative assemblies of regulatory agencies. Economic lobbyists represent, educate and advocate on the behalf of their business clients’ interests. Politics and economics affect each other in complex sometimes inexplicable ways. The aim is to make the people in the administrative capacity to look favourably on the side of the business (Adellino 272). The paper tries to scrutinize the relationship between lobbying, businesses and political decisions and how the government makes a profit from this.
Politics and economics are tied together with some scholars even arguing that politics is merely an extension of economics. Political economists strongly speak out on the proactive position of governments in economic policy and for their ability to regulate the business cycle. Regulation of the business cycle involves putting in place fiscal and monetary measures in order to mitigate or avoid adverse effects of economic depressions and recessions. These measures also pertain to economic policies such as taxation, economic barriers, price fixation et cetera. The aim of the economic lobbyists is to make sure that the policies the government makes favour them and provide a conducive business environment for the success of their businesses. The lobbying involves delivery of data or opinions to a government decision maker at local or national level. They do this by presenting the interest of their company or client in the context of public interests. After receiving data, the decision makers then decide basing on the content of the data their next course of action.
The government profits from its relationship with businesses in a variety of ways. Lobbying is important to the government too as it needs to know what is going on in the real world. Government-business relations enable decision makers in the business to be aware of the conditions prevailing in the business environments to make relevant legal policies. Also, they do want to make decisions or have a debate on a law when they are not well informed. Government-business relations give an opportunity also for the government to present its demands. For instance, a business may be lobbying for the establishment of an industry that might compete with a government-owned industry or institution. The government might grant the company permission in a condition that the company gives back royals to the government regularly. Royals are part of the profit that the company gives back to the government.
However, these relationships might cause harm to the country especially when government officials take advantage of them and start engaging in corruption. For example, the government official might award illegal tenders to companies in exchange for personal financial rewards (Adelino 257). In other instances, due to financial bribes, the relevant government dockets might choose to look away in cases where a business is conducting activities that might be harming the nationals of the country. Examples include child, labour, crime and illegal drug trafficking. The perpetrators of such activities in the government might accrue illegal wealth at the expense of the country’s development. In 2004-2006, the American political establishment suffered a number of painful scandals related to lobbying practices. In a report to ‘The Lobbying Manual’ (Luneberg and Susman, 2005), U.S. Senator
Carl Levin assessed the situation with lobbying in the early 1990s:
“The 1946 Federal Regulation of Lobbying Act had become a dead letter; few
Lobbyists were in compliance, and the Department of Justice had declared the
Statute was unenforceable. It was time for a new statute” (p. XXV)
In conclusion, relations between businesses and governments are a necessary evil. Good relationships result to growth in businesses and consequently growth and development in the country as a whole. Harmony between the two entities also results in the creation of more job opportunities in the country. Bad and corrupt interactions cause economic losses and make investors shy away from investing in different sectors of the economy. It is, therefore, critical that these relationships are kept purely open and lawful as designated in the Lobbyist Act.
Works Cited
Adelino, Manuel, and I. Serdar Dinc. "Corporate distress and lobbying: Evidence from the Stimulus Act." Journal of Financial Economics 114.2 (2014): 256-272.
Choi, Seong-Jin, Nan Jia, and Jiangyong Lu. "The Structure of political institutions and effectiveness of corporate political lobbying." Organization Science, 2014.
Della Vigna, Stefano, et al. "DP9813 Market-based Lobbying: Evidence from Advertising Spending in Italy." 2014. Read More
Share:
Tags
Cite this document
(“The Relationship Between Lobbying, Businesses And Political Decisions Essay”, n.d.)
The Relationship Between Lobbying, Businesses And Political Decisions Essay. Retrieved from https://studentshare.org/social-science/1681449-why-is-politics-and-government-big-business

“The Relationship Between Lobbying, Businesses And Political Decisions Essay”, n.d. https://studentshare.org/social-science/1681449-why-is-politics-and-government-big-business.
Comments (0)
Click to create a comment or rate a document

CHECK THESE SAMPLES OF The Relationship Between Lobbying, Businesses And Political Decisions

Relationship between organizational leadership, culture and performance in family businesses

...?Running Head: RESEARCH PROPOSAL Examining the Relationship between Organizational Leadership, Culture and Performance in family Businesses [University] Examining the Relationship between Organizational Leadership, Culture and Performance Introduction The family business is often viewed as an extension of the personality and goals of its founder (Heifetz et al., 2009). The merging of ownership and management into a single individual is a defining characteristic of the family firm and may ultimately account for the success or failure of the enterprise (Sorenson, 2000). However, there is a dearth of research regarding the extent to which the founder is able to embed strategic behaviors into family firm management and culture or the degree...
6 Pages (1500 words) Dissertation

THE CURRENT POLITICAL AND ECONOMIC RELATIONSHIP BETWEEN EUROPE AND CHINA

During the Cold War Era, China was the largest and most powerful ally of the Soviet Union and the EU was the largest and most powerful ally of the US during the Cold War Era. What makes these alliances all the more important and interesting is the fact that the US and the USSR were divided in terms of political ideologies. The US represented capitalism and the USSR represented Socialism. With the collapse of the USSR in the late 1980s, China did not take over the role of successor to the USSR in leading the charge against capitalism, but demonstrated a desire to buy into capitalism to a certain extent. That China would remain committed to its Socialist system and embrace change with the aid of capitalist powers such as the EU is...
19 Pages (4750 words) Essay

﻿Lobbying Expenditures and Contributions
The term lobbying comes from the activities of private citizenry regularly congregating in the lobbies of legislative chambers before a session to petition legislators. (Schmidt, Shelley and Bardes, 2011, pg. 234)
Lobbying has become a huge business involving battles over governmental public policies, and trillions of dollars in appropriations, contracts, and profits are up for grabs. Between 1998 and 2006, the american medical association spent in excess of $1.5 million on lobbying the federal government, and that total placed it second on the biggest spender list to the$3.17 million spent by the U.S chamber of commerce (Morgan and Hrebenar, 2009, pg.33). Overall, lobbying exp...
1 Pages (250 words) Essay

... 26 November How does Lobbying work? Lobbying is the process of trying to convince the pubic officials to act in a certain manner usually so that a legislation may be defeated or passed. An individual can only work as a lobbyist if he knows what the right time to be at the right place is. Knowledge and timing are central to one’s effectiveness as a lobbyist. “Most professional lobbyists do not really sell “influence” but rather “access”. Because they know the system, are familiar with the individuals involved in the process, and are located in Washington or state capitols, they can get their issues heard” (“What is Lobbying?”). Lobbying works by a hierarchical system wherein the request is processed from the bottom to the top after passing...
1 Pages (250 words) Essay

...Lobbying Paper LOBBYING PAPER Lobbying is a legal practice stipulated in the constitution of the United s. Individual and group interest have found there way up to offices of the federal government through lobbyists (Zetter, 2008). Meyers and Associates is a lobbying firm based in Washington D.C, operating the lobbying business for more than 25 years. Larry D. Meyers, the President of Meyers and Associates, was interviewed regarding his lobbying firm. As president of the firm, he has experience of lobbying in Washington for more than 35 years. He has worked under different government offices; additionally he has taken the responsibility of lecturing on the issue of lobbyism in the United States. The agency, serves clients...
2 Pages (500 words) Essay

The Relationship between Networks

...﻿The Relationship between Networks INTRODUCTION The upward mobility of User Created Content (UCC) sites as a social and entertainment movement has put its potential under scrutiny. Stretching from satire, to information and entertainment, UCC has cut its niche to being 'the next big thing'. Millions of people, especially college students are subscribers to at least one social networking site. There is very little knowledge though on why they use these sites. This paper intends to examine the perception that Nottingham Business School MSc students have towards using UCC websites, in order to achieve a critical view and understanding of the factors that affect them. The exercise used both qualitative and quantitative primary research...
14 Pages (3500 words) Assignment

The Relationship Between Political Stability and Economic Growth

...﻿Financial Performance Between Similar Businesses 1. Introduction The development of corporate activities worldwide has led to the necessity for an extensive restructuring of the methods used in order to evaluate the various corporate decisions on particular organizational issues. In this context, strategic management has been proved the most appropriate tool for the improvement of organizational performance through the appropriate customization of the practices applied on the various organizational departments. The value of strategic management is identified to its effectiveness towards the increase of the firm’s productivity, i.e. the improvement of the firm’s financial performance. The above target is achieved both directly...
16 Pages (4000 words) Essay

... economic policies. This is owing to the reason that the government plays a decisive role in developing the financial performances of Japan. While determining the association between Japanese economy and political economic policies enacted by the Japanese government, it has been viewed that the financial advancement of the nation is typically based upon the aspects of private entrepreneurship. Contextually, the Japanese government has supported the country to develop its financial performance in almost every sphere that comprises currency, small business industry as well as infrastructure and technology. However, when serving the population with these developmental facilities, it has been viewed that the government has been confronted...
13 Pages (3250 words) Research Paper
sponsored ads
Save Your Time for More Important Things
Let us write or edit the essay on your topic "The Relationship Between Lobbying, Businesses And Political Decisions" with a personal 20% discount.
GRAB THE BEST PAPER

Let us find you another Essay on topic The Relationship Between Lobbying, Businesses And Political Decisions for FREE!