Immigration As A Source Of Conflict In France - Essay Example

Comments (0)
Add to wishlistDelete from wishlist
Cite this document
Summary
From the discussion in the essay "Immigration As A Source Of Conflict In France," it may be concluded that immigration adds competition for resources in the country and, therefore, the government should provide enough job and investment opportunities…
Download full paperFile format: .doc, available for editing
HIDE THIS PAPERGRAB THE BEST PAPER95.9% of users find it useful 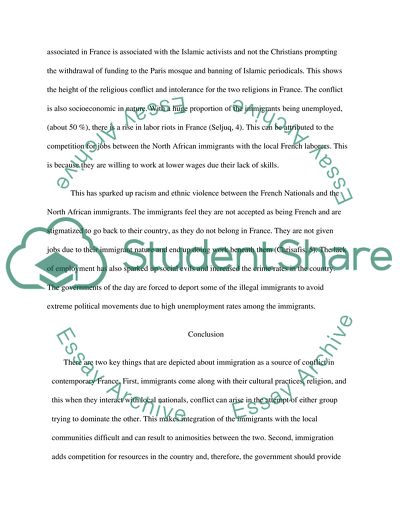 Extract of sample "Immigration As A Source Of Conflict In France"

﻿Immigration As A Source Of Conflict In France
Introduction
France has witnessed a huge share of immigrants since the French revolution and is considered the 4th best destination in the world. Most of the immigrants are North Africans and come from countries such as Algeria, Morocco, and Tunisia. After fighting for France in the colonial times, they migrated to France and were accorded citizenship (Seljuq, 2). Others are refugees being there to escape the horrors of their homes such as fighting. The immigrants enter France legally or illegally.
The conflict in France is multi-natured. First, it can be attributed to religion as it takes place between the Muslims and the Christians. The Muslims faithful contain the second largest religious community after the Roman Catholics feel that they should allowed wearing the headscarf in schools (Seljuq, 8). The wearing of the hijab in French public schools sparks up a debate by the Christians and other religious groups since of the separation of the church and the state banning all religious symbols in public schools. This leads to demonstrations by the Muslims and a series of court proceedings to try and reverse the decision. The conflict escalates when the Muslim immigrants demand separate schools for their children that are government funded. This is in competition with their Catholic counterpart’s Mission schools that are funded by the government therefore demanding the same (Graham, Wade, 3).
The religious conflict is also evident in the condemning of Islamic traditions and rituals such as animal sacrifices by the other religious groups mostly the Christians. Terrorism is associated in France is associated with the Islamic activists and not the Christians prompting the withdrawal of funding to the Paris mosque and banning of Islamic periodicals. This shows the height of the religious conflict and intolerance for the two religions in France. The conflict is also socioeconomic in nature. With a huge proportion of the immigrants being unemployed, (about 50 %), there is a rise in labor riots in France (Seljuq, 4). This can be attributed to the competition for jobs between the North African immigrants with the local French laborers. This is because they are willing to work at lower wages due their lack of skills.
This has sparked up racism and ethnic violence between the French Nationals and the North African immigrants. The immigrants feel they are not accepted as being French and are stigmatized to go back to their country, as they do not belong in France. They are not given jobs due to their immigrant nature and end up doing work beneath them (Chrisafis, 5). The lack of employment has also sparked up social evils and increased the crime rates in the country. The governments of the day are forced to deport some of the illegal immigrants to avoid extreme political movements due to high unemployment rates among the immigrants.
Conclusion
There are two key things that are depicted about immigration as a source of conflict in contemporary France. First, immigrants come along with their cultural practices, religion, and this when they interact with local nationals, conflict can arise in the attempt of either group trying to dominate the other. This makes integration of the immigrants with the local communities difficult and can result to animosities between the two. Second, immigration adds competition for resources in the country and, therefore, the government should provide enough job and investment opportunities so as to avoid socio-economic conflict and labor woes.
Works Cited
Chrisafis, Angelique. "Immigration: France Sees Tensions Rise Five Years on from Paris Riots." (2010): 1-4. Print.
Graham, Wade. "The French Immigration Debate:" The Social Contract (1991): 47-51. Print.
Seljuq, Affan. "Cultural Conflicts: North African Immigrants in France." The International Journal of Peace Studies 2.2 (1997): 1-11. Print. Read More
Share:
Tags
Cite this document
(“Immigration As A Source Of Conflict In France Essay”, n.d.)
Retrieved from https://studentshare.org/social-science/1680997-second-essay

(Immigration As A Source Of Conflict In France Essay)
https://studentshare.org/social-science/1680997-second-essay.

“Immigration As A Source Of Conflict In France Essay”, n.d. https://studentshare.org/social-science/1680997-second-essay.
Comments (0)
Click to create a comment or rate a document

Globalization As a Source and an Antidote for Conflict

...). It is fundamental, in addition to comprehending the term’s various dimensions and meanings, to make a scrupulous investigation of whether globalization is “good” or “bad”,  a question hotly debated all over the world. This paper makes a brief synopsis of the debates surrounding globalization as a source and an antidote for conflict, and it undertakes a reflective exploration of the economic, cultural, and political aspects of globalization in order to make out the strengths and weaknesses of this genuine global heritage. The Debates Surrounding Globalization Whereas there is difference of opinion about what exactly the term ‘globalization’ means, it is an undisputed fact that there are hot debates surrounding globalization, and a study...
8 Pages(2000 words)Research Paper

..., which offers information about all countries in the world. In addition, I also carried out research from a number of other relevant sources on print and the Internet. The research was a novel idea since I was able to have a buildup of basic information before deciding on the sites, places, and any festival to visit based on research from the materials. For a country with a population estimate of sixty-six million and 643,801 square kilometers in size, France is slightly less than Texas in size. The local people call it a hexagon with the hexagon being the country's symbol, due to its shape (Whittaker 6). However, the country boasts of mixed geographical features. In this case, part of the country’s terrain is mountainous or mountainous...
5 Pages(1250 words)Essay

Immigration Law of the United States vs. France

...? A Discussion of Immigration Laws: The Comparisons Between the United s and France Due Introduction The United States is a country renowned as the historical melting pot of ethnicities, cultures, and ideologies. Issues concerning immigration continue to be at the center of a great deal of ethical, social, and political debate. The United States is not the only country that struggles with the finding of the best possible policies to be applied to the immigrant populations within the country. Many countries in Europe, as well as, Canada have similar concerns. France, in particular, is presently reforming and altering how they handle immigration concerns; their reasoning however is rather different for several reasons. Between these two...
6 Pages(1500 words)Essay

A Conflict Over a Multi-Source Context

...? A conflict over multi-source context A conflict over multi-source context Discussion on whether or not the planning staff considered the air emission problem ‘out of context’. The phrase ‘out of context’ means ignoring the general meaning of something to assign unnecessary meaning or importance to a section of it. With regards to this case, I think the planning staff did not consider the air emission exposure problem ‘out of context’ because they argue that air emission will be offset by greener alternative fuels, and shorter idling times for ships, since traffic congestion in the ports will be reduced as a result of the expansion. On the other hand, when considering total emissions, the citizen groups could be right to say...
4 Pages(1000 words)Essay

A Conflict Over a Multi-Source Context

...A Conflict Over A Multi-Source Context The primary source of conflict is the airport expansion and the associated health exposure risks for asthma attributed to the expansion. Therefore establishing the proper context for this conflict should include the appropriate health exposure risk assessment for asthma associated with the expansion of the airport. According to the Framework for Environmental Health Risk Management a multi-source context should be considered when "the population is exposed to the same pollutant from other sources" (9). In order to properly consider the risks of air emissions from the airport expansion to asthma, a proper multi-source context must be established to deal with the air emissions concerns. Air...
2 Pages(500 words)Case Study

Political Conflict in France and Japan

The effects of illegal immigration in Britain and France

...Effects of Illegal Immigration: Britain and France By Insert Presented to Location Due Effects of Illegal Immigration: Britain and France Introduction Illegal immigration is a term that is adopted to defer to those people to embark on migration across the borders of a country, or a situation whereby foreign nationals reside in a given nation, and in a manner that violates the laws that govern the immigration policies of the destination nation. The issue of illegal immigration is highly prevalent among the residents of poor nations to head to richer nations. This do this in order to take advantage of the high quality of life that prevails in the rich country. However, despite this move, illegal immigrants find themselves to be the poorest...
12 Pages(3000 words)Research Paper

... France France is the second largest country in Europe after Ukraine and the first largest country in the European Union with about 20 percent of territory lying outside Europe. The name of the country comes from the name of the Germanic tribe the Frank, which settled in the western part of the Roman Empire “Interesting Facts About France”). France stretches from the North Sea to the Mediterranean Sea. The landscape of France is diverse and includes mountains in the south and east with the highest peak of Europe, the Alpine peak of Mont Blanc. In the landscape of France, rivers also play an important role. The river basins in the country are the Rhone, the Seine, the Loire and the Garonne (Encyclopedia.com). All of them played...
2 Pages(500 words)Essay

Immigration as a political and social cleavage in France

Immigration as a Political and Social Cleavage in France All countries have bases of conflict. Mostof the conflicts often reflect divisions due to religious, economic and ideological differences. Such social and political differences are present in France. The French Revolution of 1789 divided the country sharply across ideological lines. In addition, conflicts between church and state, social class, generational and regional differences have been central to French politics. More recently, immigration has emerged as a base of conflict in French society and politics. In the following two paragraphs, the objective of this short is to describe some aspects of immigration as a new conflict for France.
For many years, France has bee...
2 Pages(500 words)Essay

...Vietnam Conflict with France Introduction Historians have acknowledged the piece of evidence that there had been struggling in Vietnam for decades earlier than Vietnam War began. People from Vietnam had put up with French colonial rule for more than six decades when Japanese force conquered parts of Vietnam in 1940. The Vietnam conflict with France really started in 1847 through the military operations made by French troops as a part of protecting the Catholic groups (Spartacus Educational). The war is also known as French Indochina war, Franco- Vietnamese War, Franco- Viet Minh War and The dirty War. Historians have documented variety of causes like politics, social, economic and legal issues play a vital role in the conflict. Vietnam...
6 Pages(1500 words)Term Paper
sponsored ads
Save Your Time for More Important Things
Let us write or edit the essay on your topic "Immigration As A Source Of Conflict In France" with a personal 20% discount.
GRAB THE BEST PAPER

Let us find you another Essay on topic Immigration As A Source Of Conflict In France for FREE!