Comments (0)
Add to wishlistDelete from wishlist
Cite this document
Summary
Fresh in the memories of the media and historian is the cold war that was fought between USSR and the USA, a fact that led to actual war in…
Download full paperFile format: .doc, available for editing
HIDE THIS PAPERGRAB THE BEST PAPER96.8% of users find it useful 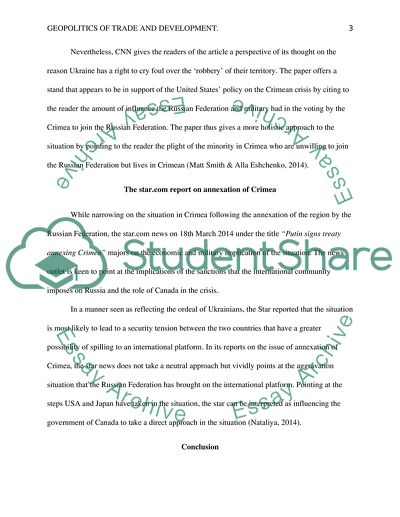 Extract of sample "Geopolitics of Trade and Development"

Geopolitics of Trade and Development Introduction Tensions between Russia and the European peninsula, as well as the greater NorthAmerican continent, have generated wars and near wars. Fresh in the memories of the media and historian is the cold war that was fought between USSR and the USA, a fact that led to actual war in some countries like Vietnam and Korea. The trend in tension between Russia and the rest of the world has not been new, and more recently is the Crimean question that escalated the political tension in both Europe and America. In an attempt to understand different perspective with which media reports analyses geopolitical situations, this study will analyze the Ukraine and Russian crises over Crimea through a comparison of the Canadian news item (The star.com) and an international news item (CNN). Through a realist approach, this paper will thus analyze different manners with which the two media sources reported the situation.
CNN report on annexation of Crimea
A CNN news report on 18 March 2014 by Matt Smith and Alla Eshchenko reporting the situation in Crimea was entitled “Ukraine cries ‘robbery’ as Russia annexes Crimea.” In a more influencing manner, the paper reported the culmination of events that led to the annexation of Crimea by Russia. By quoting from figures, CNN reported that the voter percentage of 97% for the Crimean residents voted for the nation to join the Russian Federation. Through the opening paragraphs of the article, the paper gives the reader a notion that the action by the Federation of Russia to annex Crimea is a legal situation going by the unfolding of events and the willingness of the Crimean citizens to join the Russian Federation.
Nevertheless, CNN gives the readers of the article a perspective of its thought on the reason Ukraine has a right to cry foul over the ‘robbery’ of their territory. The paper offers a stand that appears to be in support of the United States’ policy on the Crimean crisis by citing to the reader the amount of influence the Russian Federation and military had in the voting by the Crimea to join the Russian Federation. The paper thus gives a more holistic approach to the situation by pointing to the reader the plight of the minority in Crimea who are unwilling to join the Russian Federation but lives in Crimean (Matt Smith & Alla Eshchenko, 2014).
The star.com report on annexation of Crimea
While narrowing on the situation in Crimea following the annexation of the region by the Russian Federation, the star.com news on 18th March 2014 under the title “Putin signs treaty annexing Crimea” majors on the economic and military implication of the situation. The news outlet is keen to point at the implications of the sanctions that the international community imposes on Russia and the role of Canada in the crisis.
In a manner seen as reflecting the ordeal of Ukrainians, the Star reported that the situation is most likely to lead to a security tension between the two countries that have a greater possibility of spilling to an international platform. In its reports on the issue of annexation of Crimea, the star news does not take a neutral approach but vividly points at the aggravation situation that the Russian Federation has brought on the international platform. Pointing at the steps USA and Japan have taken in the situation, the star can be interpreted as influencing the government of Canada to take a direct approach in the situation (Nataliya, 2014).
Conclusion
The difference in manners with which different news sources report situations from a realistic point can be said to be dependent on the interest of the news source and the country on the geopolitical situation. Inferring to the Crimean crisis, the USA had a direct link and stand to the situation; thus, the report by the CNN was to give the citizens of the country particularly a vivid situation of the crises. On the other hand, Canada had taken a rather look warm stand on the situation that may have been contrary to the interest of the star news. The news report by the star could thus be said to be one that is geared towards motivating the government to take a direct approach to the geopolitical situation.
References
Matt Smith & Alla Eshchenko. (2014). Ukraine cries ‘robbery’ as Russia annexes Crimea. CCN news 18 March report. Retrieved: http://www.cnn.com/2014/03/18/world/europe/ukraine-crisis/
Nataliya Vasilyeva. (2014). Putin signs treaty annexing Crimea. The star news.com 18 march. Retrieved:http://www.thestar.com/news/world/2014/03/18/crimea_signs_treaty_to_become_part_of_russia.html Read More
Share:
Tags
Cite this document
(“Geopolitics of Trade and Development Assignment Example | Topics and Well Written Essays - 500 words”, n.d.)
Retrieved from https://studentshare.org/social-science/1677145-geopolitics-of-trade-and-development

CHECK THESE SAMPLES OF Geopolitics of Trade and Development

...? Trade Growth and Development Introduction Definition of terms International trade is a trade or exchange of goods between two or more nations. This can be at the individual level, organizational, company level, or at the government level. International trade occurs when there is movement of goods across national borders. Economic growth is the increase in a country’s production measured in Gross National Product or Gross National Income or income per capita (Nafziger 2005). A sign of growth in the economy is shown by the boost in the quantity of trade conducted in a country, setting up of buildings, roads among other visible factors....
8 Pages(2000 words)Essay

...?How free trade causes development? Free trade is a buzzing concept in modern times, with all governments across the world proclaiming to promote it.Indeed, the last thirty years or so of global economic integration is based on free trade principles – also referred to as laizzez-faire capitalism. Definitely, there are many advantages to be availed as a result of free trade arrangements. At the same time, it also has its own set of drawbacks. One should also make discernment in what exactly ‘free trade’ means. This is because, often, politicians use the term for its rhetoric appeal while implementing policies that are protectionist. So,...
9 Pages(2250 words)Research Paper

...?LESSON LEARNED Lessons Learned Discussion Forum Geopolitics The Louisiana Purchase led to an end of last battle between France, Spain, and United States of America. The deal enabled France to gain the funds it needed to run her economy. The previous alliance between France and United States of America was seen as the most lucrative real estate deal in history, which resulted in the increase of US borders down the Mississippi river and increase in trade routes. On the other hand, France wanted money for war against Britain. The Louisiana deal was the answer to these queries (Hansen 44, 1997). The acquisition of Louisiana helped United States in that it played the role of supplying goods to colonists...
3 Pages(750 words)Assignment

Trade and Free Trade Development in the Last Fifty Years

...Trade and "Free Trade" Development in the Last Fifty Years Undoubtedly, the current global economic order is mainly based on the "free trade" regime. This economic order is characterized by the increasingly unhampered flow of products and goods across national and regional borders. Arguably, the dominance of the "free trade" regime is the inevitable result of major economic policy developments and trends in the last fifty years, which include the freeing of many economies from trade restrictions through national economic policy, the action of Bretton Woods institutions, the formation of trading blocs, and...
2 Pages(500 words)Essay

Geopolitics in the Middle East

...Reshaping the Middle East Introduction Reshaping the Middle East government systems, according to the western world's democratic point of reference, can be likened to a sailboat sailing along gusty winds with its sails raised up high. It could be, or it has been, as the process has unfolded with the US led war in Iraq, one of the greatest political adventures in history. The primary advocate that the approach would work, convinced by the marvels of his powerful nation, so to speak, is no other than President George H. W. Bush himself. His word echoed this way, "As long as the Middle East remains a place where freedom does not flourish, it will remain a place of stagnation, resentment, and violence ready for export." (qtd... the Middle East...
3 Pages(750 words)Essay

Geopolitics of the Middle East

...resources have contributed to the fiscal development of the region. The region plays a geopolitical role in the creation of the global order. It has the largest oil and gas reserves, compared to other oil and gas producing countries. This means that the Persian Gulf will continue to exports its oil and gas after these resources have been exhausted in other countries. Consequently, the developing regions such as the United States and Asia have invested in the region in order enjoy the financial benefits. References Ajedi, A. (2009). Geopolitics of the Persian Gulf Security: Iran and the United States. Retrieved...
2 Pages(500 words)Essay

Global Geopolitics of the Middle East

...Global Significance of the Middle East Comprising of 21 Arab s and one Jewish the Middle East is a region riddled with conflict either because of oil or religion and wars over other rich resources, and land. From a personal point of view based on reading various articles and watching news channels, the significance of the Middle East lies in the fact that there is an abundance of oil there and its road networks are widely used for trade. Notably also, the cuisines of most Middle Eastern states require spices and herbs which then provides a reliable source of market for producers of these. However, for investments to flourish continually there has to be stability, which has become threatened by the brutal regimes in...
2 Pages(500 words)Essay

...refers mostly to physical security, a view which is based on the following fact: most of Russia’s nuclear weapons are stored in sites in rather short distance from the Russia-Ukraine borders (Figure 4). The development of war in Ukraine could set these sits in severe risk. The decisions of Russia in the Ukraine crisis are also related to geopolitics. In fact, in the case of Ukraine a practice similar to those started when Russia was governed by Brezhnev can be identified. Reference is made to the ‘Brezhnev doctrine’ (Kolossov 143); the above doctrine promoted the idea that Russia should not allow the establishment in the neighboring countries of political systems that ‘are friendly to the west’ (Kolossov...
5 Pages(1250 words)Essay

...and 1989, global citizens were held hostage to recurring conflict between the world’s two largest superpowers which never reached a full militaristic situation as a result of both superpower’s capability to impose mass destruction against the other (Gaddis 56). However, since 1989, many states have developed more technological capacity and economic strength, making powers other than the Western Bloc and the Eastern Bloc more influential in geopolitics. Since 1989, more geopolitical power spread throughout emerging militaristic and economically-sound states has changed the dynamics of political relationships throughout the world. This essay explores the Gulf War, theory regarding global...
5 Pages(1250 words)Essay
sponsored ads
Save Your Time for More Important Things
Let us write or edit the assignment on your topic "Geopolitics of Trade and Development" with a personal 20% discount.
GRAB THE BEST PAPER

Let us find you another Assignment on topic Geopolitics of Trade and Development for FREE!