What moral obligations do we owe foreigners - Essay Example

Comments (0)
Add to wishlistDelete from wishlist
Cite this document
Summary
These duties and responsibilities are our moral obligations, by considering what is right and wrong and feeling as if you are bound to make a…
Download full paperFile format: .doc, available for editing
HIDE THIS PAPERGRAB THE BEST PAPER93.2% of users find it useful 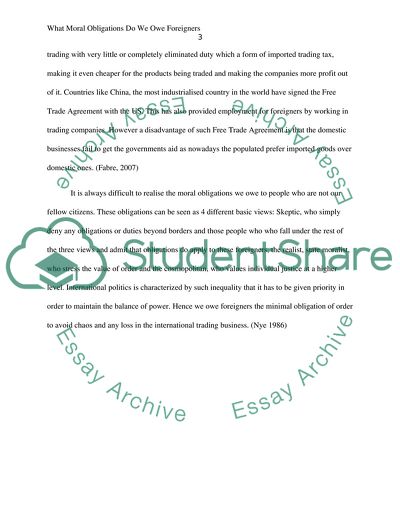 Extract of sample "What moral obligations do we owe foreigners"

What Moral Obligations Do We Owe Foreigners What Moral Obligations Do We Owe Foreigners It is our duty to act in a certain way with people, keeping ethics and rules that restrain us from doing something wrong in mind. These duties and responsibilities are our moral obligations, by considering what is right and wrong and feeling as if you are bound to make a decision with your own set of values in mind. Keeping a healthy relationship with people that surround you by maintaining the moral obligations that fall under you can help you get through life with ease knowing that they would do the same for you.
The number of people migrating to different countries due to political, medical, educational and unemployment is increasing day by day. Concluding into having many foreigners residing in developed regions of a country. The most immigrants are found in the US, illegal and legal citizens combined. Many of those people feel out of place and do not have enough money for getting necessities such as food and shelter after crossing the border. This is where the government should act and provide medical and financial assistance to these foreigners in order for them to settle. After all many of the countries these foreigners belong from have provided us with trading goods.
There is an unlimited amount of international trading taking place in the world, companies which had started off as small businesses are now going global because of their exceptional goods and services have a greater demand around the world which then expanded and grew larger than life which is the ultimate goal of a business. The government promoting the idea of a free trade agreement, which is a pact between two or more countries which carry out trading with very little or completely eliminated duty which a form of imported trading tax, making it even cheaper for the products being traded and making the companies more profit out of it. Countries like China, the most industrialised country in the world have signed the Free Trade Agreement with the US. This has also provided employment for foreigners by working in trading companies. However a disadvantage of such Free Trade Agreement is that the domestic businesses fail to get the governments aid as nowadays the populated prefer imported goods over domestic ones. (Fabre, 2007)
It is always difficult to realise the moral obligations we owe to people who are not our fellow citizens. These obligations can be seen as 4 different basic views: Skeptic, who simply deny any obligations or duties beyond borders and those people who who fall under the rest of the three views and admit that obligations do apply to these foreigners, the realist, state moralist, who stress the value of order and the cosmopolitan, who values individual justice at a higher level. International politics is characterized by such inequality that it has to be given priority in order to maintain the balance of power. Hence we owe foreigners the minimal obligation of order to avoid chaos and any loss in the international trading business. (Nye 1986)
References
References
Mark J. Auger
Top of Form
Nye, J. S. (1986). Nuclear ethics. New York: Free Press.
Top of Form
Fabre, C. (2007). Justice in a changing world. Cambridge: Polity Press.
Bottom of Form
Bottom of Form Read More
Share:
Tags
Cite this document
(“What moral obligations do we owe foreigners Essay”, n.d.)
What moral obligations do we owe foreigners Essay. Retrieved from https://studentshare.org/social-science/1672669-what-moral-obligations-do-we-owe-foreigners

“What Moral Obligations Do We Owe Foreigners Essay”, n.d. https://studentshare.org/social-science/1672669-what-moral-obligations-do-we-owe-foreigners.
Comments (0)
Click to create a comment or rate a document

CHECK THESE SAMPLES OF What moral obligations do we owe foreigners

...Introduction "An obligation is a requirement to take some of action. It can be legal or moral. There are also obligations in other normativecontexts, such as obligations of etiquette, social obligations, and possibly the In terms of politics, obligations are requirements that are to fulfill. These are generally in the form of legal obligations, which incur a penalty for lack of fulfillment, although certain people are obliged to carry out certain actions for other reasons as well, which can be due to tradition or social reasons. Obligations vary from person to person, for example, a person holding a political office will generally have far more obligations than an average adult citizen, who themselves will have more obligations than...
8 Pages(2000 words)Case Study

Ethical and Moral Obligations of Consensual Sex in The Workplace

... Consensual Sex in the workplace is something that happens all the time irrespective or rank, status or power. While sexual harassment is accepted as a serious problem in workplaces, consensual sex is still a much-debated issue. There are no clear legal guidelines and employers have to frame their own policies to deal with the issue. Besides affecting the careers of the people involved in the relationship, consensual sex can affect co-workers, families and even the very organization in which employs them. Is it possible to isolate personal and professional lives What can be the ethical and moral consequences of consensual sex And Can Consensual sex be a form of sexual harassment These are the questions this study has tried to answer...
10 Pages(2500 words)Essay

Rather, humans are able to determine courses of action which will benefit the sum whole of humanity and to perform those behaviors which, in their assessment, create the greatest general good regardless of the personal good created.
The tendency of humans to perform these actions is called benevolence. Finally, there exists a third motivating factor, which must be taken into account to form a proper moral theory; this third factor will be called obligation. Obligation is the result of the social nature of humans. Suffice to say, for now, that obligations are the motivations to perform actions which result from explicit promises regarding what behavior one will engage in.
Obligations have been a key aspect of many influent...
8 Pages(2000 words)Essay

.... However, loyalty is a feature of special, mutually-enriching relationships in which self-interest may be forfeited without anticipation for reward (Powerpoint, 2006). The key words are mutually-enriching and in the case of Enron, the whistle-blowers witnessed the firms failure to fulfil its duty and thus viewed exposure as more than merely a right, but a duty to act in a morally responsible manner to reclaim a sense of business ethics and protect investors from fraud. Thus, the whistle-blowers enacted their perceptions of justice against Enron. Whistleblower Duty 4 The term justice has been argued as being a moral obligation to respect a specific entitlement plus that of an assignable person to whom this entitlement is owed...
6 Pages(1500 words)Research Paper

...Moral obligations extend only to human beings It is a fact that moral obligations need to be taken care of by the human beings because it is something central to their character. They must uphold the performance of the moral undertakings because if they do not do so, then there would be no difference between them and the animals. I seem to agree with the premise that moral obligations extend only to human beings since they are the most superior beings within the entire planet. They are responsible for their actions and to the non-living beings as well. Therefore their responsibility is immensely significant towards the performance of all tasks and actions. The moral obligations need to be legitimized before one can remark them as being...
2 Pages(500 words)Essay

...Judaism, Christianity as well as Islam share the same roots and are based upon similar principles of monotheism. Believing in one God, these three religions also seem to emerge from the region which is in closer proximity with each other. Jerusalem, in Palestine, is the home to Judaism as well as Christianity whereas Mecca and Medina are considered as sacred placed for Islam. Judaism Under the teachings of Judaism, believers have to believe in the existence of one God however, Judaism came into existence when people generally believed in many gods. Resultantly, Jews have to keep distance from the non-believers and those who believed in many gods. Essentially, for Jews, foreigners and non-believers were those who believed in many gods...
2 Pages(500 words)Essay

...﻿Foreigners in American Culture Foreigners in international environments are required to try as much as possible to understand the attitudes, beliefs and cultural backgrounds of their new environments. Those that are not able to learn these aspects have a hard time adapting. On the other hand individuals who have cultural intelligence are able to spot cultural differences and adapt their behaviors accordingly (Elaine, 2011). Christopher Earley defined cultural intelligence as the ability to adapt to new cultures. Individuals who have cultural intelligence are not familiar with every culture but they are able to observe and read situations and people in order to make appropriate decisions. The paper will highlight the American cultures...
1 Pages(250 words)Speech or Presentation

Today any and every business would like to open up their business in the United Arab Emirates as it has become the crossroads for some richest and the most famous people all over the world (Whelan, 2010).
There are seven states in the United Arab Emirates federation they have a supreme and consolidated law for all the states. Except for Dubai, Dubai enjoys some special privileges, it has the basic laws similar to the general ones but it has been given the right to deal with the internal situations by itself and some other rights. These relaxations are only granted to the state of Dubai alone.
The law of the United Arab Emirates has been designed keeping in mind the civil laws of the old times. It has major principle under...

8 Pages(2000 words)Research Paper
sponsored ads
Save Your Time for More Important Things
Let us write or edit the essay on your topic "What moral obligations do we owe foreigners" with a personal 20% discount.
GRAB THE BEST PAPER

Let us find you another Essay on topic What moral obligations do we owe foreigners for FREE!