Politics of the knowledge - Essay Example

Comments (0)
Add to wishlistDelete from wishlist
Cite this document
Summary
Sandra Harding and Donna Haraway are eminent social scientists who believe that the inherent objectivity that lies within social and scientific research needs to be reassessed as it does not take into…
Download full paperFile format: .doc, available for editing
HIDE THIS PAPERGRAB THE BEST PAPER91.1% of users find it useful 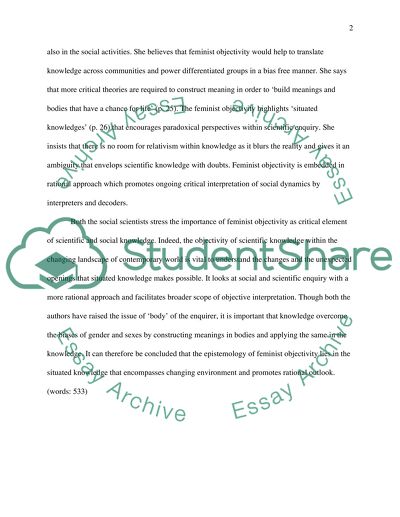 Extract of sample "Politics of the knowledge"

The scientific and social knowledge is facing serious feminist challenge. Sandra Harding and Donna Haraway are eminent social scientists who believe that the inherent objectivity that lies within social and scientific research needs to be reassessed as it does not take into consideration the fundamental differences between the two sexes. They believe that the contemporary knowledge is androcentric and lacks authentic perspective of women. A set of dualism exists within the knowledge that is overpowered by the androcentric viewpoint, thus creating biases that adversely impact the truth or the authenticity of the scientific knowledge. The two scientists strongly contest the objectivity of the contemporary knowledge and advocate new model of knowledge acquisition that encompasses feminist constructivist views and thereby delineating gender biases.
Harding (1986) asserts that feminist theorists are objective in their hypotheses which are ‘free of gender loyalties’ (p. 138). At the same time, they also tend to ensure that women’s activities are fully represented within the broader scope of the social relation with the existing environment. The Marxist’s analysis of bourgeois labor becomes contentious as it ignores women’s experiences and therefore, need to be redefined to include women’s contribution to social life at all levels of interaction. Harding says that while subjectivity is inherent in the feminist epistemologies, the cultural production of gender identity necessitates greater understanding of changing social structure that ‘resists the continuation of the distorting dualities of modernism’ (p. 161). She emphasizes that feminist empiricism is pertinent as it challenges the androcentric biases. Indeed, women as enquirer considerably enhance objectivity of science.
Haraway (1988) posits objectivity at the center of her arguments as male dominancy at all levels of scientific knowledge promotes biases in social constructions of not only identities but also in the social activities. She believes that feminist objectivity would help to translate knowledge across communities and power differentiated groups in a bias free manner. She says that more critical theories are required to construct meaning in order to ‘build meanings and bodies that have a chance for life’ (p. 25). The feminist objectivity highlights ‘situated knowledges’ (p. 26) that encourages paradoxical perspectives within scientific enquiry. She insists that there is no room for relativism within knowledge as it blurs the reality and gives it an ambiguity that envelops scientific knowledge with doubts. Feminist objectivity is embedded in rational approach which promotes ongoing critical interpretation of social dynamics by interpreters and decoders.
Both the social scientists stress the importance of feminist objectivity as critical element of scientific and social knowledge. Indeed, the objectivity of scientific knowledge within the changing landscape of contemporary world is vital to understand the changes and the unexpected openings that situated knowledge makes possible. It looks at social and scientific enquiry with a more rational approach and facilitates broader scope of objective interpretation. Though both the authors have raised the issue of ‘body’ of the enquirer, it is important that knowledge overcome the biases of gender and sexes by constructing meanings in bodies and applying the same in the knowledge. It can therefore be concluded that the epistemology of feminist objectivity lies in the situated knowledge that encompasses changing environment and promotes rational outlook.
(words: 533)
References
Harding, Sandra G. (1986) From Feminist empiricism to Feminist Standpoint Epistemologies. In Sandra Harding, The Science Question in Feminism, (pp 136-162). NY: Cornell University Press.
Haraway, Donna. (1988). Situated Knowledge: The Science Question in Feminism and the Privilege of Partial Perspective. Feminist Studies, 14(3), 21-46. Read More
Share:
Tags
Cite this document
(“Politics of the knowledge Essay Example | Topics and Well Written Essays - 500 words”, n.d.)
Politics of the knowledge Essay Example | Topics and Well Written Essays - 500 words. Retrieved from https://studentshare.org/social-science/1666679-politics-of-the-knowledge

CHECK THESE SAMPLES OF Politics of the knowledge

...up of infrastructure which was brought about by the early activities. People did not stop discovering new ways of living despite the hardships, from architecture and agriculture to religion and politics, animal domestication to economic set-up. There are two types of knowledge; Knowledge by Representation and Knowledge by Acquaintance. Knowledge by Representation basically refers to the way in which a human being expresses himself. This is normally done through aspects of communication like language speaking or gestures. Through representation, knowledge is fundamentally used as a surrogate. This is for example when someone finds an...
5 Pages(1250 words)Essay

The Economy of Irish Republic

KTM One of the Leaders of Motorcycle Industry

From Modernisation Theory perspective, what are the advantages and disadvantages of using Edward Saids understanding of the relationship between knowledge, power and modes of representation in relation to the contemporary politics

...Relationship between Knowledge, Power and Modes of Representation In Relation To the Contemporary Politics Introduction Edward Said (1935-2003) was an American writer, intellectual and academic who has been considered one of the influential writers and thinkers of twentieth century. He was a Christian Arab born in Jerusalem. His most famous book Orientalism was published in 1978. His few other famous books are Out of Place-A Memoir, A Critical Reader, Culture and Imperialism and Covering Islam (Notablebiographies.com). His book Orientalism is a masterpiece in which he wrote about the Euro-Centric prejudice of the West against Islamic-Arab East. His work revolves around the abuse of culture and life, in...
11 Pages(2750 words)Research Paper

...Politics of the Knowledge Introduction Culture is one of the important domains of human behavior. Notably, varied cultures have been generating contradictory values, beliefs, thoughts, and customs within the field of humanity, wherein past decades have given lessons about different logics underlying the thoughts of “Naturalism” and “Constructivism”. Correspondingly, the focus of study is to discuss about these two philosophical logics1. These two logics can change the traditional belief of social and political patterns. Discussion “Naturalism” and “Constructivism”, both these philosophical logics are considered as completely different from each other in general. In the book “Way of...
1 Pages(250 words)Essay

...Politics of the knowledge Time greatly influence the context on understanding any story as it aids in choosesof approaches, which distinctly aids in description of the diverse historical methods. The story of The Immortal Life of Henrietta Lacks by Rebecca is massively rely on the prevailing period that largely depends on the social and economic situations. This is depicted in chapter eight of the book. Chapter 8 illustrate the underlying responsibilities that historical depictions regarding the constructivist accounts of the prevailing story. Constructivist is significant celebrations for diverse point of view, which gives better position of exercising truth (Carr, 1987). Moreover, it crates diverse...
1 Pages(250 words)Essay

Scientific Knowledge in Regards to Social and Politics Arena

...﻿Scientific Knowledge in Regards to Social and Politics Arena Ethnography looks in detail the human social environment. On the other hand, knowledge is the ability of an individual to familiarize with a certain skill as a result of his/her expertise. Power is the ability to become influential and have dominion over something or someone especially governments. Therefore, acquisition of knowledge in a certain field may result in the ability to influence and control views and perceptions of others. Scientific knowledge has existed since the early times of mankind. It has been incorporated into the social and political life of man and has influenced a lot of decisions made in every society. Scientific knowledge has grown to become... the...
4 Pages(1000 words)Essay

...Paper Knowledge The below bullet points are some of the areas to be studied to answer the questions listed under knowledge and self assessments 1. John Locke’s Theory of Knowledge and human understanding John Locke’s philosophy on mind and thought; an analysis on how human beings think and express themselves through logic, language and religious practices. Reading of the book The Epistle to the reader and how he describes his involvement in the philosophical mode of thinking Understanding of the anecdote about conversation with friends Hume’s concept on causation Hume’s understanding on the An Enquiry Concerning Human Understanding Understanding three ways of constructing...
6 Pages(1500 words)Assignment
sponsored ads
Save Your Time for More Important Things
Let us write or edit the essay on your topic "Politics of the knowledge" with a personal 20% discount.
GRAB THE BEST PAPER

Let us find you another Essay on topic Politics of the knowledge for FREE!