Comments (0)
Add to wishlistDelete from wishlist
Cite this document
Summary
It is a philosophy because it is a way of looking at knowledge, reality, and existence. As the book says, Buddhism is the “experience of…
Download full paperFile format: .doc, available for editing
HIDE THIS PAPERGRAB THE BEST PAPER93.6% of users find it useful 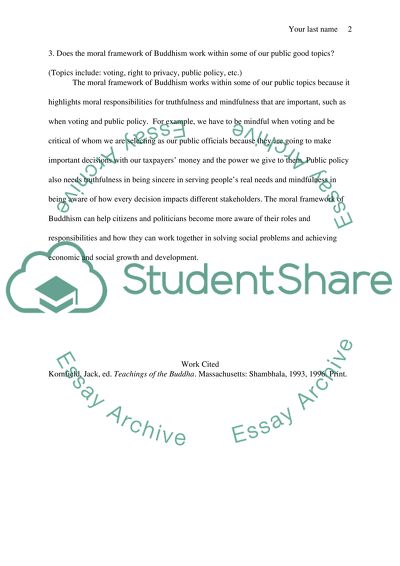 November 16 What do you take away from the religion of Buddhism? Do you see this as a religion, a philosophy, or both?Why or why not?
After reading the book, Teachings of the Buddha, edited by Jack Kornfield, I see it more as a philosophy that can be a form of religion. It is a philosophy because it is a way of looking at knowledge, reality, and existence. As the book says, Buddhism is the “experience of awakening to the truth of life” (Kornfield ix). Buddhism helps people understand their existence and reality. Furthermore, through this philosophy, one can also attain religion because Buddhism is a system of faith too. For example, reaching “nirvana” for me is like being completely aware of God that there is no more fear and worry, only a deep sense of peacefulness. Thus, Buddhism is a philosophy that can also be a religion.
2. Referring to The Teachings of the Buddha, name two passages and how they relate to personal, professional, and public ethics.
One of the passages that relates to personal ethics is this: “Wakefulness is the way of life…How happy he is! For he sees that wakefulness is life!...” (from the Dhammapada translated by Byrom as qtd. in Kornfield 1). When I am wakeful, I am aware of who I am and what I am doing in relation to the effects of my actions to others and my environment. Wakefulness is important to being mindful of my impacts on others. In addition, this passage is related to professional and public ethics: “A person of wisdom should be truthful, without arrogance, without deceit, not slanderous and not hateful” (adapted from the Sutta-nipata translated by Saddhatissa as qtd. in Kornfield 3). This is related to professional ethics because it emphasizes the importance of truthfulness in doing our jobs. It reminds people of the wisdom in being honest in all our roles and responsibilities as professionals. It is also related to public ethics because public employees should serve without malice and deceit. They should do their jobs with honesty and integrity.
3. Does the moral framework of Buddhism work within some of our public good topics? (Topics include: voting, right to privacy, public policy, etc.)
The moral framework of Buddhism works within some of our public topics because it highlights moral responsibilities for truthfulness and mindfulness that are important, such as when voting and public policy. For example, we have to be mindful when voting and be critical of whom we are selecting as our public officials because they are going to make important decisions with our taxpayers’ money and the power we give to them. Public policy also needs truthfulness in being sincere in serving people’s real needs and mindfulness in being aware of how every decision impacts different stakeholders. The moral framework of Buddhism can help citizens and politicians become more aware of their roles and responsibilities and how they can work together in solving social problems and achieving economic and social growth and development.
Work Cited
Kornfield, Jack, ed. Teachings of the Buddha. Massachusetts: Shambhala, 1993, 1996. Print. Read More
Share:
Tags
Cite this document
(“Buddhism Essay Example | Topics and Well Written Essays - 250 words - 3”, n.d.)
Buddhism Essay Example | Topics and Well Written Essays - 250 words - 3. Retrieved from https://studentshare.org/social-science/1666207-buddhism

CHECK THESE SAMPLES OF Buddhism

...? Buddhism Introduction Buddhism is one of the ancient religions of the world. Unlike many of its counterparts, Buddhism survived all essential challenges of the world for centuries. The founder of Buddhism, Siddhartha Gautama was a prince of the Sakya tribe in present Nepal. At the age of 29 he left home and royal comfort in search of the meaning of suffering that he witnessed around him. For, the worldly pleasure and the comfort at home gave him no satisfaction. He travelled across the plains and walleyes of Northeastern India and taught people the path of Dharma and Karma that he had realized during his great enlightenment. People were attracted by his teachings and...
7 Pages(1750 words)Essay

...Buddhism A number of religions became practiced among the Central Asian people in the early second and third centuries BC. Confucianism, Taoism, and Buddhism can serve as clear examples. Buddhism started and developed in India and travelled into the Central Asia, Korea and Japan. It soon became a leading religion in the entire Central China. Buddhism is practiced by over 300 million people all over the world. It appeared 2500 years ago due to Siddhartha Gautama, who later became known as Buddha after he got enlightened beneath a Bodhi tree. Siddhartha got distressed by all the sufferings around him and decided to leave his family and all the material comforts he...
8 Pages(2000 words)Research Paper

... Buddhism One of the most followed and a native religion of the Indian subcontinent is Buddhism, which incorporates numerous cultures, customs, beliefs which are solely created on the teachings of Siddarth Gautama. Siddharth Gautama is more popular amongst the masses by the name of Buddha. The aforementioned spiritual leader, Buddha, was an inhabitant of the Indian subcontinent and worked throughout his life to bring an end to misery amongst the people, eradicate illiteracy, selfishness and practice self-control. Gautama Buddha also introduced the concept of Nirvana, which stated that after doing all the good deeds possible, a person would achieve the highest level of eternal happiness. Buddhism can be categorized into Theravada... and...
5 Pages(1250 words)Research Paper

...? Buddhism Meaning of the four Noble Truths The four noble truths as per Buddhism are: life means suffering, the origin of suffering is attachment, the cessation of suffering is attainable and the path to the cessation of suffering (The Four Noble Truths, n. d). Buddhists believe that suffering has major role in human life. In their opinion, it is difficult for a person to lead a life full of happiness. Pain, sickness, injury, tiredness, old age, and death are some of the physical sufferings whereas sadness, fear, frustration, disappointment, and depression are some of the psychological sufferings in human life. Harvey (1990) pointed out that “If there were a creator of the world, he would be regarded as...
3 Pages(750 words)Essay

...Number: Buddhism There are many interesting facts that ordinary people like us should learn about Buddhism. First, this religion contrary perhaps to what everybody knows considers Buddha as a teacher, not a god (O’Brien 30). In this religion, Buddha is the one who teaches someone a special education primarily on the principles on how to reach Nirvana. There are many things that one needs to initiate in order to get there and these include good works. For instance, Buddhists give foods to Monks because they have the belief system that when they give food to them the very act itself will help them reach Nirvana (Scott 95). This is achieved as a profound peace after a long process of liberation. In other...
4 Pages(1000 words)Essay

...Running Head Buddhism Buddhism Buddhism is one of the oldest religions in the history which is based on old traditions and cultural norms of the Eastern world. The main peculiarity and distinction of this religion is that it emphasizes meditation practices. Buddhism shows the universal character based on the ritual doctrines and unique practices which awake human spirit and consciousness. Buddhism consists of and is influenced by three main schools of thought: the Vedic religion, the Sramanic movement, and Jainism. In other words, there is a conflict between the seemingly timeless, unchanging values of a pure tradition and the continuing imperative to...
3 Pages(750 words)Essay

...Buddhism is a religion that teaches peace and is regarded to be one of the most common meeting grounds for all the Asian cultures. Unlike Hinduism, Islam and Christianity, Buddhism does not embrace the idea of divine holiness. The components that create Buddhism are critical as they embrace peace and allow individuals to reflect from within. Hence Buddhism is embraced my Asian cultures because it rejects diety, promotes peace and allows individuals to find their own path to salvation through inner suffering. One of the critical elements why Buddhism is the common meeting ground of Asian cultures is the fact that Buddhism does not believe...
2 Pages(500 words)Research Paper

...Buddhism Buddhism
2 Pages(500 words)Annotated Bibliography
sponsored ads
Save Your Time for More Important Things
Let us write or edit the essay on your topic "Buddhism" with a personal 20% discount.
GRAB THE BEST PAPER

Let us find you another Essay on topic Buddhism for FREE!