Comments (0)
Add to wishlistDelete from wishlist
Cite this document
Summary
The appointments of Kong as president of board, and Watson as vice president of the board after the company went public could have a negative impact upon the operations of the organisation. These two individuals had been the CEO and deputy CEO for the company, respectively, when the company was undergoing financial constraints. …
Download full paperFile format: .doc, available for editing
HIDE THIS PAPERGRAB THE BEST PAPER95% of users find it useful 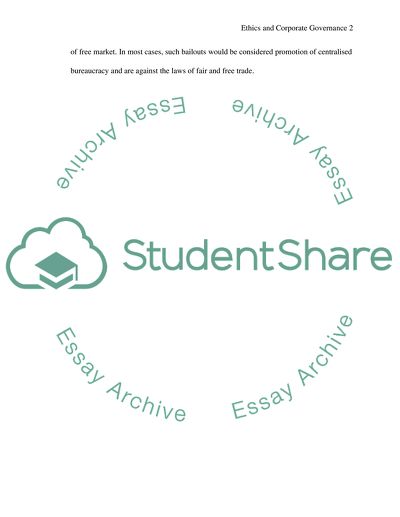 Extract of sample "Ethics and governance"

ETHICS AND CORPORATE GOVERNANCE Ethics and Governance The appointments of Kong as presidentof board, and Watson as vice president of the board after the company went public could have a negative impact upon the operations of the organisation. These two individuals had been the CEO and deputy CEO for the company, respectively, when the company was undergoing financial constraints. Maintaining these individuals within the board brings a negative impression to the organisation as they played significant role in the collapse of the organisation.
2. The board should have sought the accurate financial reports and not have relied on the decisions being made by Kong and Watson. The board should also have been provided with the market information of the telephone networks sector to make an educated judgment regarding venturing into the business.
3. In the collapse of the corporate, executive members were involved in making wrong decisions, through their desires to keep the factual financial position of the company hidden from the general public. The non-executive members failed on their part to monitor the financial performance and relied on information provided by Watson members, which was mostly untrue.
4. Within the corporation numerous ethical issues surrounding the conduct of Joe Kong and Jeff Watson, the CEO and Deputy CEO respectively. These breaches could have been avoided through initiating control measures and monitoring the decisions that these executives made for the organisation. The directors of the company, including independent members, failed to seek substantial evidence of the information being relayed by the executives and this implies laxity in the control.
5. The government should not arrange for a bailout of YCP. This is because government supported bailouts are commonly perceived as government interference with the element of free market. In most cases, such bailouts would be considered promotion of centralised bureaucracy and are against the laws of fair and free trade.
Reference
Rezaee, Z. (2009). Corporate Governance and Ethics (5th ed.). New Jersey: John Wiley & Sons.
 Read More
Share:
Tags
Cite this document
(“Ethics and governance Case Study Example | Topics and Well Written Essays - 250 words”, n.d.)
Retrieved from https://studentshare.org/social-science/1658402-ethics-and-governance

CHECK THESE SAMPLES OF Ethics and governance

...Corporate Ethics and Governance Part A Background of the Issue: The report published by Greenpeace in April 2006 alleged that the fast-food chainslike McDonald indulge indirectly in destroying the rainforests of Amazon for growing soy-based animal feed used by these chains for fattening the chicken. The rain forests in the Amazon are being subjected to deforestation for growing a new variety of soybean developed on the basis of research by the Brazilian scientists. The growing of this kind of soybean is greatly facilitated by the rainforest climate of Amazon. Hence the production of soybean has boomed in this region and extensive savanna like ecosystem (known as Cerrado) is being converted into industrial...
12 Pages(3000 words)Case Study

...The Paper is divided into the following sections I. Ethical Issues in the Business Environment II. Organizational and Individual Ethical Behaviour- Critical Evaluation III. Corporate Governance Failures-an Evaluation IV. The Case of Oil Industry (Shell, BP, Exon) I) Ethical Issues in The Business Environment Business ethics is concerned with attaining the objectives of the organization in a way so as not to come into conflict with the interests of stakeholders of the business, society or certain groups or individuals (influence groups). When the business effects the interest of many groups including the internal and external groups, conflict of interest...
6 Pages(1500 words)Essay

...Introduction Business ethics is a form of the art of applied ethics that examines ethical principles and moral or ethical problems that can arise in a business environment. In the increasingly conscience-focused marketplaces of the 21st century, the demand for more ethical business processes and actions, known as ethicism, is increasing.Simultanously, pressure is applied on industry to improve business ethics through new public initiatives and laws (e.g. higher road tax for higher-emission vehicles). Business ethics can be both a normative and a descriptive discipline. As a corporate practice and a career...
6 Pages(1500 words)Essay

...Ethics and Governance In Friedman’s (1970) article The Social Responsibility of Business is to Increase its Profits, he describes businessmen as “unwitting puppets of the intellectual forces that have been undermining the basis of a free society”. In this case, I believe him to be referring primarily to leftist intellectuals since they are the most likely to speak out against business and profits. The cause for Friedman’s statement is probably due to the birth of ‘Ethical business’, this is where companies will demonstrate a social conscience, possibly to gain support from consumers who buy their products, but will cut the profits of the shareholders in a company. Freidman also assumes...
2 Pages(500 words)Case Study

...Ethics and Governance BC315006S Level 3 (Semester 2) Module Leader: Stuart Wall of 2009/10 Submitted by: ID No Q1 (a) How relevant to business and management is a Kantian approach to ethics? Kant’s approach to business and management is through the ethical theory of deontoloy. This theory focuses on moral behavior and obligation to other people that involves customers, clients, shareholders, and employees. Human beings are free agents and they can do or act as they please (Boyte, 2004). However, one must act within a limit or a boundary that he or she will not harm other people. Kant’s ethics suggested that manager, owners, or employees should act...
6 Pages(1500 words)Essay

...Ethics and Governance ETHICS AND GOVERNANCE GRACE SARKAR Order No. 439822 09 May ETHICS AND GOVERNANCE How relevant to business and management is a Kantian approach to ethics? Kantian approach to ethics is vital to business and management the way air is necessary to breathe. The Kantian approach tends to keep business facing right side up at all times. This is not an easy proposition in a world where business practices often times are corrupt and coercive. The issue becomes even more problematic when survival becomes difficult without resorting to corrupt and coercive practices. Business is basically...
6 Pages(1500 words)Essay

Identify the climax of each story. Is there a denouement (resolution) I grouped these stories under Maniacs and Other Monsters; identify the monster and discuss whether you feel that this is the best category for these stories and why

...Professional Ethics and Governance Contents Question 3 Corporate culture at Enron, Arthur Andersen and Lehman Brothers 3 Similarities or differences, if any 4 Link between corporate culture, greed and fraud 5 References 7 Question 1 Corporate culture at Enron, Arthur Andersen and Lehman Brothers The corporate culture of Enron can be explained by analyzing the values of risk and taking into consideration the growth and entrepreneurial creativity. The values of the creativity and risk taking will maximize the value of the share it can be explained with the help of the example such as in case of high debt and the company failed to analyze its creativity ensuring its commitment to increase integrity. This resulted and created a barrier...
5 Pages(1250 words)Assignment
sponsored ads
Save Your Time for More Important Things
Let us write or edit the case study on your topic "Ethics and governance" with a personal 20% discount.
GRAB THE BEST PAPER

Let us find you another Case Study on topic Ethics and governance for FREE!