Comments (0)
Add to wishlistDelete from wishlist
Cite this document
Summary
All the people cannot be political leaders but can contribute to leadership of their own country through participating in the elections and choosing the political…
Download full paperFile format: .doc, available for editing
HIDE THIS PAPERGRAB THE BEST PAPER91.2% of users find it useful 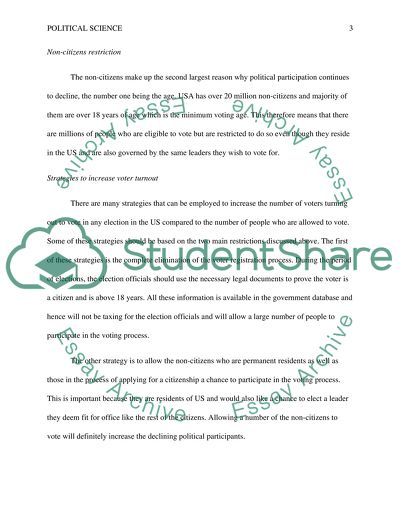 Political Participation Affiliation: Introduction Political participation of citizens through voting accords the people a share of the governance in the country. All the people cannot be political leaders but can contribute to leadership of their own country through participating in the elections and choosing the political leader they want. Political participation in the United States through voting is however marked with restrictions which mean that not every individual residing in the US is allowed to vote during the elections. The reasons for political decline all come down to two major restrictions which are voter registration and non-citizens not being allowed to vote (Lowi, Ginsberg, Shepsle and Ansolabehere, 2013).
Voter registration restriction
The bill signed into law by Bush which tried to ease the voter registration process by allowing the registration to be carried out when people are getting their driver’s license or even joining the military did nothing to ease the declining political participation. This is so because not all people have time to go in and register even though they are going to get their driver’s license as most are nervous enough about the test to even think about registering as a voter. The other reason is that there are a group of ignorant people who are not aware about them being required to register as a voter before being allowed to vote and by the time they do, it is too late for them to register and hence they simply forego the voting process. Others are not patient enough to go register and they also fore go voting in the elections.
Non-citizens restriction
The non-citizens make up the second largest reason why political participation continues to decline, the number one being the age. USA has over 20 million non-citizens and majority of them are over 18 years of age which is the minimum voting age. This therefore means that there are millions of people who are eligible to vote but are restricted to do so even though they reside in the US and are also governed by the same leaders they wish to vote for.
Strategies to increase voter turnout
There are many strategies that can be employed to increase the number of voters turning out to vote in any election in the US compared to the number of people who are allowed to vote. Some of these strategies should be based on the two main restrictions discussed above. The first of these strategies is the complete elimination of the voter registration process. During the period of elections, the election officials should use the necessary legal documents to prove the voter is a citizen and is above 18 years. All these information is available in the government database and hence will not be taxing for the election officials and will allow a large number of people to participate in the voting process.
The other strategy is to allow the non-citizens who are permanent residents as well as those in the process of applying for a citizenship a chance to participate in the voting process. This is important because they are residents of US and would also like a chance to elect a leader they deem fit for office like the rest of the citizens. Allowing a number of the non-citizens to vote will definitely increase the declining political participants.
Conclusion
Europe unlike the US has no restrictions of a qualified voter having to register in order to be allowed to vote. This has improved their voter turnout and increased the political participation of their citizens tremendously. US should borrow a leaf from the Europeans and lift the restrictions. This combined with allowing non-citizens with permanent residence status to vote will have a large impact on the voter turnout and ultimately the election results.
Reference
Lowi, T., Ginsberg, B., Shepsle, K. and Ansolabehere, S. (2013). American Government: Power and Purpose, 13th Ed. New York: W. W. Norton Incorporated. Read More
Share:
Tags
Cite this document
(“Why has political participation declined over time What strategies Essay”, n.d.)
Why has political participation declined over time What strategies Essay. Retrieved from https://studentshare.org/social-science/1654202-why-has-political-participation-declined-over-time-what-strategies-would-you-recommend-for-increasing-voter-turnout

“Why Has Political Participation Declined over Time What Strategies Essay”, n.d. https://studentshare.org/social-science/1654202-why-has-political-participation-declined-over-time-what-strategies-would-you-recommend-for-increasing-voter-turnout.
Comments (0)
Click to create a comment or rate a document

An Analysis of Youth Voter Turnout in the UK

...in each subsequent election. At the same time, the older voters’ turnout has demonstrated a decline (CIRCLE, 2009). Despite these encouraging trends in youth voter turnout in the US, Ellis et.al., (2006) reports that data from both presidential and parliamentary elections in 214 countries worldwide demonstrate significant declines from 1945 to 2006 overall. The steady decline evidences a fluctuation from just below 80% of registered voter turnout in 1945 to persistent declines to just over 60% by 2006 (See Figure 1)....
21 Pages(5250 words)Dissertation

...?Introduction: In today’s world, women are not far behind than men. They are making rapid progress in every sphere of life. Women have no longer confined themselves only to their household duties. The progress of women is quite visible across the world. However, there still arises a question over whether gender equality has really been achieved across the world and across every field. While in some countries women have made huge progress, in some other nations they are still lagging far behind than men. Similarly, while in some fields, their progress is really startling, in some other spheres there is not much development. Particularly, in area of politics women are far behind than men. This paper tries to enlist some strategies... for...
5 Pages(1250 words)Term Paper

In Praise of Low Voter Turnout

...In Praise of Low Voter Turnout In his book, the praise of low voter turnout, Krauthammer Charles identifies some of the challenges American faces as renowned democratic country. It appreciates the democratic space in America and supposes that in the same sense of democracy, Americans are suppose to register increased voter turn out in their election which can be evidently be observed to be on the decline trend. He confirms that the frequently asked questions is,’why do we experience low voter turn out every election calendar. The writer expresses dismay in that America unlike other...
3 Pages(750 words)Essay

...Political participation Introduction Political participation derives from freedom to associate, assemble and take part in conduct of public affairs through voting. The citizens are allowed to register as political candidates, hold election campaigns or elect their representatives to public office. Full participation in elections leads to democratic ideals that enhance political stability, and high satisfaction with the ruling governments (Boehmke 45). A political election is a decision-making process whereby the citizens choose their own political representatives to hold constitutional...
5 Pages(1250 words)Essay

...reform efforts need to be altered to protect against fraud, but they also need to provide an easier path to voting at the same time. The current system is simply making it too difficult for many local election officials to abide by recent reforms and still work to increase voter turnout. It has also been discovered that cities who have low voter turnout tend to elect incumbents to mayoral and city council seats at far higher rates than cities that have high voter turnout. This, combined with other research already mentioned, works to support the hypothesis set out at the beginning of...
5 Pages(1250 words)Research Paper

The Problem of Low Voter Turnout in the United Kingdom

...is renowned for its appetite in following democratic principles of governance. The country has three major political outfits namely; Labour party, Liberal Democrats, and the Conservative party. Being a democratic country, one would expect that the voter turnout rate is higher than in many other nations that are still nurturing their democracies. But this is not the case. To give validity to my argument, let me compare the UK with its closest neighbor, the Republic of Ireland. The UK participated in nine elections from 1951 to 1982, whilst the Republic of Ireland has had 10 general elections. While voter...
8 Pages(2000 words)Article

... did not exercise their voting rights was larger than the number of voters that determined the winning party. Knowing all of this statistics, the British political system became worried and there was much generated fanfare. The main concern over the 2005 elections was not who won for what seat. Instead, it was how many cared to participate in the elections. In this paper, I explored the deep underlying reasons why the low voter turnout occurred. I also explored the effectiveness of solutions and strategies that sought to address the problem. Political Thoughts on Voter Turnout Statistics Why is it that British voters are not turning up in polls? There are different, though not necessarily unrelated, theories explaining this social...
9 Pages(2250 words)Assignment

...out and vote than the younger ones. Religion is another major factor and since majority of the voters here are religiously active, it’s bound to increase their propensity to vote. District 1 is more likely to vote for a Democrat, whereas district 15 is likely to vote for a Republican. If the other districts follow suit, then it means that the gubernatorial elections are more likely to be won by the Republicans. This is because Illinois majority of the citizens in this state are whites ,who are more educated, have got more stable families and many of them are in employment, which means they can get time off and go out and vote to exercise their right. These two districts can just...
1 Pages(250 words)Assignment

...of the countries where a bar is set as a limitation for ones right to vote. In the past few decades, voter’s turnout had been increasing but recently, the turnouts have gone down in most of the world’s conventional democracies (Franklin, 2004). Decline in the poll turnout is sometimes considered posing a problem in many countries. The problems range from economic to cultural, demographical to technological. Institutional factors are also part and parcel of a failed voter’s turnout (Milner, 2007). The political class has in most cases carried the blame on the topic of...
10 Pages(2500 words)Research Paper

...Equality – Voter Turnout Equality The issue of same sex marriage is controversial in the world today and people often find it difficult to talk about it. However, it is important to respect all people regardless of their sex orientation, religion, and even race. This is primarily because every individual is entitled to an opinion and thus his or her choice should be accorded the sufficient respect it deserves. With this regard, governmental policies and laws should not bind gay people who are fully convinced that same sex marriage is the best way for them. Just like their heterosexual counterparts, these individuals should be granted the freedom to make choices concerning who and what...
2 Pages(500 words)Essay
sponsored ads
Save Your Time for More Important Things
Let us write or edit the essay on your topic "Why has political participation declined over time What strategies would you recommend for increasing voter turnout" with a personal 20% discount.
GRAB THE BEST PAPER

Let us find you another Essay on topic Why has political participation declined over time What strategies would you recommend for increasing voter turnout for FREE!