Comments (0)
Add to wishlistDelete from wishlist
Cite this document
Summary
This paper declares that if the private corporations are using the public funds, they should be subjected to FOIA so that their activities can be observed. The funds are contributed by the citizen for the provision of specific services and performance of given functions by the federal government…
Download full paperFile format: .doc, available for editing
HIDE THIS PAPERGRAB THE BEST PAPER96.1% of users find it useful 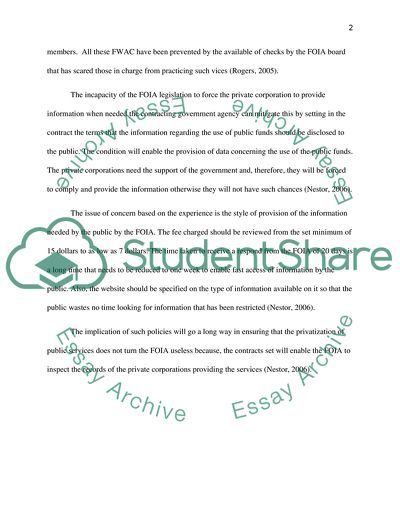 Extract of sample "FOIA and Privatization of Government"

﻿
If the private corporations are using the public funds, they should be subjected to FOIA so that their activities can be observed. The funds are contributed by the citizen for the provision of specific services and performance of given functions by the federal government. The argument against is that the subjection may result to rigidity in the functioning of the institutions, and there might be situations of covering up fraud acts by the management. The degree of submission should be up to the extent on which the finances are provided and utilized (Rogers, 2005).
There should a difference in the way of privatizing the traditional governmental services and the private corporation using public funding for non-traditional services because the two are very distinct in the manner of disseminating their duties. The traditional government needs more strict rules in guiding against the events of FWAC because their services affect the entire public and a small flaw in them could lead to the collapse of the whole institution. On the other hand, the private corporations require observance as well but to a smaller extend basing on the nature of the population they serve (Rogers, 2005).
The examples of FWAC in private corporations and nonprofit corporations that were not subjected to FOIA, but may have been prevented by FOIA include misappropriation of funds by the management, tax evasion, stealing the properties of the firms. Also, giving and taking of bribes, the incorrect use of resources by wasting them and offering favors to friend and family members. All these FWAC have been prevented by the available of checks by the FOIA board that has scared those in charge from practicing such vices (Rogers, 2005).
The incapacity of the FOIA legislation to force the private corporation to provide information when needed the contracting government agency can mitigate this by setting in the contract the terms that the information regarding the use of public funds should be disclosed to the public. The condition will enable the provision of data concerning the use of the public funds. The private corporations need the support of the government and, therefore, they will be forced to comply and provide the information otherwise they will not have such chances (Nestor, 2006).
The issue of concern based on the experience is the style of provision of the information needed by the public by the FOIA. The fee charged should be reviewed from the set minimum of 15 dollars to as low as 7 dollars. The time taken to receive a respond from the FOIA of 20 days is a long time that needs to be reduced to one week to enable fast access of information by the public. Also, the website should be specified on the type of information available on it so that the public wastes no time looking for information that has been restricted (Nestor, 2006).
The implication of such policies will go a long way in ensuring that the privatization of public services does not turn the FOIA useless because, the contracts set will enable the FOIA to inspect the records of the private corporations providing the services (Nestor, 2006).

CHECK THESE SAMPLES OF FOIA and Privatization of Government

Government for Sale: The Privatization of Essential Services

...? Government for Sale: The Privatization of Essential Services Government for Sale: The Privatization of Essential Services We live in a uniquely incongruous era. On the one hand, government is trying to downsize in response to a persistent economic malaise. On the other hand, meteoric growth in technology, which makes the instantaneous exchange of information a fact of life, has opened up unprecedented avenues of efficiency in the way services can be administered. As well, a stubborn insistence (which continues to manifest itself at the voting polls) on better financial management in the public sector has practically forced government to reinvent itself. It has been a gradual process, but in a trend dating to the first Bush administration...
10 Pages(2500 words)Essay

... effectiveness in organizational management and service delivery. Although the change is a major threat to the job security of public employees, it is more likely to continue as the improved level of productivity has already been proved. In delivering the public service, privatization can make use of the advantages of competition and flexibility. These advantages also help in attaining greater effectiveness and increased response to the needs of customers. These objectives are very difficult to be achieved within the public sector either due to the incapability of the government or due to the slow procedures of the government machinery. When the government plans for the privatization of any stream of public administration, it has to enter...
3 Pages(750 words)Essay

...﻿Evidence from Privatization Privatisation involves the transfer of ownership and the management of state owned enterprises to private firms. Governments should be less corrupted so as to increase the efficiency of state owned corporations and the public sector, promoting national security. Recently, pressure from the IMF and World Bank, has made privatization a major dimension in the worldwide capital market. Many countries and regions are directly adopting this as most of them had historically taken a direct role in the economy, security, social policy, control of enterprises, prevention of inequality and the ownership of national assets (Ioannis, 2012). However, due to limited budgets, governments have been unable to develop all part...
4 Pages(1000 words)Essay

(Yarrow 1999, 157-168)
Transfer f ownership makes credible the fact that the firm does not have limitless government backing (although governments do bail out even private companies from time to time) for example it bailed out the rail companies and rail track because transport is vital to the economy. (Vickers 1991)
Selling assets at a fair price leaves government wealth unaltered. If prospects f tougher treatment in the future lead to productivity improvements in state firms the government becomes better off when the productivity improves not when (or if) the firm is sold. (Chang 1992, 31-32)
Many privatised firms now face intense competition often from abroad. However, natural monopolies have aquired a new framew...
8 Pages(2000 words)Essay

New airport facilities can be added by such a principal means. Historical roots depict that major highways, bridges, tunnels and telecommunication systems have been developed and progressed by the means of privatization. Theoretical researches reveal that airport privatization has become a world-wide trend since the year 1987 and the early-on of 1994 marked the agenda for privatization of airports for more than 50 countries of the world (Poole, 1994). The general concept for such an approach in developed countries includes the principal need of major modernization and expansion and the utilization of long-term franchise so as to poss...
9 Pages(2250 words)Essay

Why the Canadian Government should not Provide Privatization of Water

... Canadian Government should not Provide Privatization of Water Water is a fundamental right, and its accessibility has for a long time been a priority to governments of various countries all over the world. Therefore, it has been a duty of the state to deliver this utility to its citizens. The scenario over time has been intolerable as there has not been equal distribution of water at an affordable rate to the public where incompetence and corruption have been cited as the primary causes for this. In Canada, there have been enormous subsidized systems which have resulted in waste, and since the precious commodity has become scarce and not cheap, this has become a perilous illusion. This has led to water privatization seeming like...
6 Pages(1500 words)Essay

Actors Nancy Martins: Is the newly elected mayor of the central town and holds the mantle to restoring its socio-economic and political identity. She is a foresighted politician with the ability to move the mass through tactical economic strategies that seeks to ease the burden on the people. Her participatory decision making approach and relentless determination is critical in reforming this town through sound economic plans.

Salvatore Pavone: He is a strong and reliable mouthpiece of workers Union and commands significant voter numbers due to the interest of the public employees he seems to fight for. In that respect, it would be important for the mayor to convince him and seek amicable approach towards the public job...

... Water privatization Introduction The issue of water privatization is a contentious one. In the previous years, the attempts by the government to privatize water has not only faced lots of opposition claims, but also has led to various confrontations with the concerned stakeholders. Some arguments are of the outlook that if water is privatized, then the resource will be made a market commodity; thus, its control will be extremely stressful. This results from the aspect water will no longer be a common resource but a commodity in the market. On the other hand, proponents of water privatization argue that through privatization of water, efficiency will automatically be achieved in the water sector. This is from the verity that the utilities...
9 Pages(2250 words)Research Paper

Government for Sale: the Privatization of Essential Services

...﻿Government for Sale: the Privatization of Essential Services We live in a uniquely incongruous era. On the one hand, government is trying to downsize in response to a persistent economic malaise. On the other hand, meteoric growth in technology, which makes the instantaneous exchange of information a fact of life, has opened up unprecedented avenues of efficiency in the way services can be administered. As well, a stubborn insistence (which continues to manifest itself at the voting polls) on better financial management in the public sector has practically forced government to reinvent itself. It has been a gradual process, but in a trend dating to the first Bush administration, the U.S. government has continued to push...
10 Pages(2500 words)Dissertation
sponsored ads
Save Your Time for More Important Things
Let us write or edit the article on your topic "FOIA and Privatization of Government" with a personal 20% discount.
GRAB THE BEST PAPER

Let us find you another Article on topic FOIA and Privatization of Government for FREE!