Comments (0)
Add to wishlistDelete from wishlist
Cite this document
Summary
The paper “Computer Crime and Cyber-Terrorism” seeks to evaluate online crime, which has now become a multi-billion dollar business. Hackers are becoming increasingly sophisticated in the means they use to get users to disclose confidential financial and personal information…
Download full paperFile format: .doc, available for editing
HIDE THIS PAPERGRAB THE BEST PAPER96.1% of users find it useful 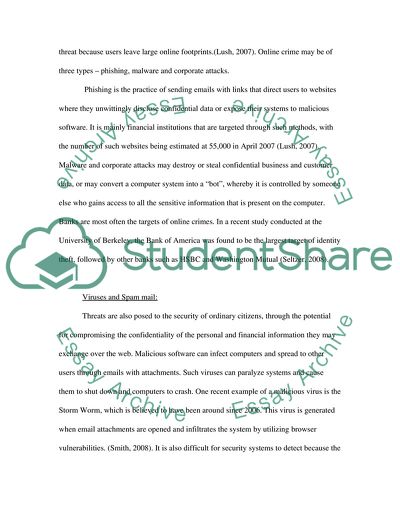 Download file to see previous pages Yet another dangerous result of the developments in technology and the availability of the Internet has occurred in the field of cyberterrorism, offering terrorists an expanded platform from which to propagate their ideas and launch their attacks (www.ntrg.cs.tcd.ie).
Online crime has now become a multi-billion dollar business. Hackers are becoming increasingly sophisticated in the means they use to get users to disclose confidential financial and personal information, which is then misused. According to an expert in online risk management, the world of computer security is increasingly under threat because users leave large online footprints.(Lush, 2007). Online crime may be of three types – phishing, malware, and corporate attacks.
Phishing is the practice of sending emails with links that direct users to websites where they unwittingly disclose confidential data or expose their systems to malicious software. It is mainly financial institutions that are targeted through such methods, with the number of such websites being estimated at 55,000 in April 2007 (Lush, 2007). Malware and corporate attacks may destroy or steal confidential business and customer data or may convert a computer system into a “bot”, whereby it is controlled by someone else who gains access to all the sensitive information that is present on the computer. Banks are most often the targets of online crimes. In a recent study conducted at the University of Berkeley, the Bank of America was found to be the largest target of identity theft, followed by other banks such as HSBC and Washington Mutual (Seltzer, 2008). ...Download file to see next pagesRead More
Share:
Tags
Cite this document
(“Computer Crime and Cyber-Terrorism Essay Example | Topics and Well Written Essays - 2000 words”, n.d.)
Computer Crime and Cyber-Terrorism Essay Example | Topics and Well Written Essays - 2000 words. Retrieved from https://studentshare.org/social-science/1547446-computer-crime-and-cyberterrorism-today-see-order-instructions

CHECK THESE SAMPLES OF Computer Crime and Cyber-Terrorism

The main principle of Dell is selling computers directly to the custome...
10 Pages(2500 words)Case Study

They, therefore, believe that internal and external factors affect the chances of a person being subject to a crime. The situation at which a person commits a crime also forms the basis of the determinist approach of causes of crimes.
Several theories elaborate on the factors that dispose of different people toward crimes. The classical theory explains that crimes occur when their benefits outdo the costs or consequences of the crime. The theory of Routine Activities suggests that a crime likely occurs if a motivated offender finds an attractive target and no appropriate guardianship in place. Various biological factors also influence the causes of crimes as evident in the discussion.
One of the major assumptions of the...
8 Pages(2000 words)Term Paper
sponsored ads
Save Your Time for More Important Things
Let us write or edit the essay on your topic "Computer Crime and Cyber-Terrorism" with a personal 20% discount.
GRAB THE BEST PAPER

Let us find you another Essay on topic Computer Crime and Cyber-Terrorism for FREE!