Comments (0)
Add to wishlist Delete from wishlist
Cite this document
Summary
In the Comments column, comment on what the passage meant to you or your own interpretation. Use experiences or knowledge as examples to explain the passages.
In my opinion, the passage implores us to pay attention to the unique…
Download full paper File format: .doc, available for editing
HIDE THIS PAPERGRAB THE BEST PAPER98.4% of users find it useful 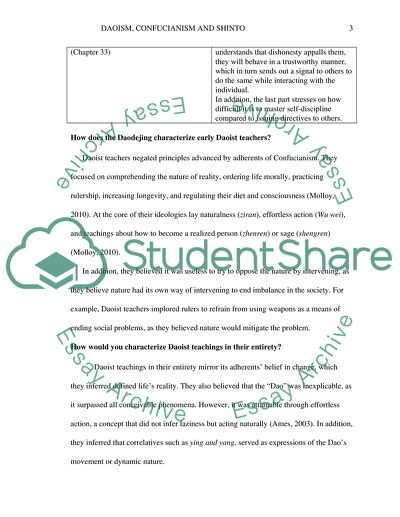 Daoism, Confucianism and Shinto Reflections on the Daodejing (Tao Te Ching) Worksheet Read and reflect on the following passages. In the Comments column, comment on what the passage meant to you or your own interpretation. Use experiences or knowledge as examples to explain the passages.
Passage
Comments
1)
Keep your mouth shut,
Guard the senses,
And life is full.
Open your mouth,
Always be busy,
And life is beyond hope.
(Chapter 52)
In my opinion, the passage implores us to pay attention to the unique phenomena occurring around us via our senses. In order to do so, one must find harmony between the mind and body. For example, silence during meditation increases one’s ability to perceive unique occurrences that are easy to miss.
In addition, it also warns against speaking without critically thinking about what you intend to say. Words spoken without consideration might inflict emotional harm on others.
The last part, implores us not to waste time on trivial issues by focusing only on important things.
Better stop short than fill to the brim.
Oversharpen the blade, and the edge will soon blunt.
Amass a store of gold and jade, and no one can protect it.
Claim wealth and titles, and disaster will follow.
Retire when the work is done.
This is the way of heaven.
(Chapter 9)
In my opinion, the passage warns against overdoing things. Too much of something is poisonous. For example, overeating results in physiological harm; therefore, it is crucial to pay attention to the body’s self-regulating mechanisms.
The passage also cautions against reliance on material things as the ultimate source of happiness by inferring that people only need what is enough to lead a prosperous happy life. For example, social relationships that nurture and provide affection are crucial for sustaining happiness.
Knowing others is wisdom;
Knowing the self is enlightenment.
Mastering others requires force;
Mastering the self needs strength.
(Chapter 33)
In my opinion, this passage stresses on the importance of understanding oneself before attempting to understand others. In doing so, one will be able to behave in a manner that mirrors their principles while at the same time respecting the opinions of those around them. For example, when one understands that dishonesty appalls them, they will behave in a trustworthy manner, which in turn sends out a signal to others to do the same while interacting with the individual.
In addition, the last part stresses on how difficult it is to master self-discipline compared to issuing directives to others.
How does the Daodejing characterize early Daoist teachers?
Daoist teachers negated principles advanced by adherents of Confucianism. They focused on comprehending the nature of reality, ordering life morally, practicing rulership, increasing longevity, and regulating their diet and consciousness (Molloy, 2010). At the core of their ideologies lay naturalness (ziran), effortless action (Wu wei), and teachings about how to become a realized person (zhenren) or sage (shengren) (Molloy, 2010).
In addition, they believed it was useless to try to oppose the nature by intervening, as they believe nature had its own way of intervening to end imbalance in the society. For example, Daoist teachers implored rulers to refrain from using weapons as a means of ending social problems, as they believed nature would mitigate the problem.
How would you characterize Daoist teachings in their entirety?
Daoist teachings in their entirety mirror its adherents’ belief in change, which they inferred defined life’s reality. They also believed that the “Dao” was inexplicable, as it surpassed all conceivable phenomena. However, it was attainable through effortless action, a concept that did not infer laziness but acting naturally (Ames, 2003). In addition, they inferred that correlatives such as ying and yang, served as expressions of the Dao’s movement or dynamic nature.
Unlike in modern linguistic interpretations, the Ancient Chinese language viewed correlatives as paradoxes and not words that were synonymous to each other (Ames, 2003). For example, leading vs. following were paradoxical and represented a natural flow from one aspect to the next, which resulted from the constantly changing reality.
References
Ames, R. & Hall, D. (2003). Daodejing: “Making This Life Significant” A Philosophical Translation. New York: Ballantine Books.
Feng, G. & English, J. (Trans.). (1972). Lao Tsu: Tao Te Ching. New York, NY: Alfred A. Knopf.
Molloy, M. (2010). Experiencing the world’s religions: Tradition, challenge, and change (5th ed.). New York, NY: McGraw-Hill. Read More
Share:
Tags
Cite this document
(“Daoism, Confucianism, and Shinto Essay Example | Topics and Well Written Essays - 500 words”, n.d.)
Retrieved from https://studentshare.org/religion-and-theology/1647493-daoism-confucianism-and-shinto

CHECK THESE SAMPLES OF Daoism, Confucianism, and Shinto

...? 6 Apr. A principle of Daoism is that all things are connected and humans are part of nature. Additionally, humans need to blend in with nature and not concentrate too much on controlling it. What is your opinion of this idea? Do you think it could fit in other religions you know? I do not think this principle of Daoism is practicable at all, even if it is considered rational. Man is purely the most superior of all creatures in the nature. Nature has blessed man with much more brain than it has given to other creatures that from part of it. Man has achieved control over other things by making use of his brain. So the decision originally was made by nature itself, though I totally believe that man should be very prudent in his use...
2 Pages (500 words) Essay

... Task: Daoism The world has numerous religions, based on various beliefs from different traditional settings across the globe. However, not all religious beliefs qualify to be termed as religions. As a result, a religion must have some aspects in order to have recognition globally as world a religion. Daoism (Taoism) is one of the world-renowned religions whose origin dates back in the ancient times in China. Moreover, Daoism is the dominant religion within the Chinese communities, with over 1500 temples (Ede 20). Daoism followers believe in an ultimate reality, which is the sole maker and truth of the universe. This may be because, since all other religious beliefs are exotic, Taoism is the only religion that the China inhabitants believe...
3 Pages (750 words) Essay

Confucianism, Daoism, and Leagalism in China

...?[Your full full October 25, Confucianism, Daoism, and Legalism in China Before going to discuss how the philosophies of Confucianism, Daoism, and Legalism help in the development of a peaceful society, let us get a better understanding of what these philosophies actually are. Confucianism is one of the ancient Chinese religions, which was named after Confucius. Confucius was a great philosopher who put his efforts for the revival of religious values, customs, and traditions. The religion of Confucianism focuses on the God, the traditions of ancestors, and the presence of angels. Daoism is another ancient religion of China, which promotes the concepts of peace and harmony. If we talk about Legalism, we can say that it is a philosophy...
3 Pages (750 words) Essay

... been a main Japanese religion for thousands of years, it has always shared is cultural and spiritual role with other religious movements, like Buddhism and Confucianism. Some researchers eliminate the four phases of the historical development of Shinto: Before the arrival of other religions in Japan Shinto and other religions together in Japan The Meiji reinterpretation of Shinto in the 19th century Shinto after World War II (Religion and Ethics, Shinto) Scott Littleton, the author of the comprehensive guide towards Shintoism, states that the Shintoistic iconographic evidence appears when the more complex Yayoi culture arrives (300BCE - 300CE) (2002). It is reported that before the 6th century CE there was "no formal Shinto religion...
7 Pages (1750 words) Coursework

...COMPARISON OF EASTERN PHILOSPHIES - CONFUCIANISM AND DAOISM Confucianism Confucianism emphasizes conversion of knowledge and cultivating attitudes with ethical self reflection through principled practices to ensure correct moral conduct. This is also said to develop appropriate social values. Confucian followers are concerned with the happenings in the World and the spirit of concern is central to the philosophy. There is great emphasis on self cultivation in Confucianism leading to ultimate development and salvation in the Western sense. It is a very practical philosophy wherein abstract knowledge is required to be accompanied by reflection and then adopted as normal behavior. This is achieved through a series of rituals. The key...
2 Pages (500 words) Essay

... s the assignment was due Daoism Introduction In Daoism, the human body is considered as a precious source which aids a person in seeking spirituality. Instead of relying on external sources, human beings can maintain their health by controlling the energies flowing through their bodies. It is the control of these energies that is the basis of the Daoist Spiritual Practice of "Inner-Alchemy". It focuses on the human body and the need of cultivating the Three Treasures of Jing, Qi and Chen. “In Inner Alchemy, our human body becomes a laboratory in which the Three Treasures of Jing, Qi, and Chen are cultivated, for the purpose of improving physical, emotional and mental health; and, ultimately, merging with the Tao, i.e. becoming an Immortal...
2 Pages (500 words) Essay

Daoism and Confucianism in Writing

... Daoism and Confucianism in Writing Daoism, also Taoism is a traditional form of writing from the Chinese and associated with the Tao Te Ching. Tao Te ching is a kind of philosophical text that was written by the Laozi in 3rd/4th century. These teachings are focused on the Dao which is a purported best way or path of life. Tao/Dao is at times referred to as something that existed way before all forms came into being. Daoism is thus a Chinese tradition that holds its tenets to the Tao. Confucianism was developed by the philosopher Confucius, as an ethical system of belief, based on philosophy as well. The system was based on shaping the morals and the ethical behaviors of the ancient Chinese. It is a system of social philosophy rather than...
4 Pages (1000 words) Essay

For instance, Du Guangtung created his account using the west queen mother by selecting, re-writing, and combining various texts from the old literature. Some of the sources used by Du Guangtung to record the assembled transcendent of the fortified wall city include; Taoist, Buddhism, historical, classical and other popular sources; which retained his personal tradition of precedence work (Cahill 107). Du’s work is considered allusive and condensed. For instance, his first records are about a queen mother’s biography. The writings express the queen’s primacy in lineage and power. This account is one of the beneficial sources of Du Guangtung, which gives a complete account of the perceptions Taoists have about goddesses (Cahill 146...
10 Pages (2500 words) Essay

... words, religion provides a foundation from which to derive one’s ethics (Onlyagame, 2007). These help an individual to purify the self and strive to attain God-realization. 1.2 The ethical systems associated with religions Most religions contain an ethical code and are usually centered on a noble soul or saint. The ethical principles provide a set of rules and guidelines which help people in conducting their lives. The ethical system also provides guidelines for conducting business in different religions like Islam and Confucianism. 1.3 Shinto and Confucianism The eternal purpose of every faith, every religion in the world is the same. Shinto (Japan) and Confucianism (China) are two eastern religions which move towards the same goal...
8 Pages (2000 words) Case Study
sponsored ads
Save Your Time for More Important Things
Let us write or edit the essay on your topic "Daoism, Confucianism, and Shinto" with a personal 20% discount.
GRAB THE BEST PAPER

Let us find you another Essay on topic Daoism, Confucianism, and Shinto for FREE!