God is/is not in control of everything - Research Paper Example

Comments (0)
Add to wishlistDelete from wishlist
Cite this document
Summary
Notably, all this religions are characterised by the existence of a supernatural being who oversees the well-being of the people…
Download full paperFile format: .doc, available for editing
HIDE THIS PAPERGRAB THE BEST PAPER91.9% of users find it useful 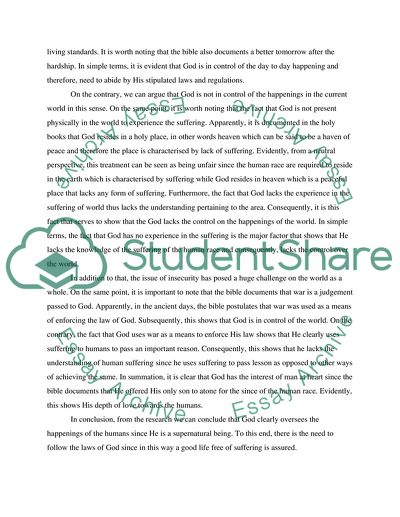 Extract of sample "God is/is not in control of everything"

Religion and theology Introduction Evidently, religion can be defined as an organisation of people who share the same beliefs and practices for instance Christianity and Hinduism. Notably, all this religions are characterised by the existence of a supernatural being who oversees the well-being of the people. However, in this particular context we are going to focus majorly on the Christian faith as a religion. On the same point, Christianity entails the belief in a supernatural being in other words, God. Apparently, the faith postulates that God is the Supreme Being who resides in the holy place, in simple terms, heaven. On the contrary, this paper delves into creation of a forum in which we evaluate the suffering experienced in the world in relation to religion. On the same note, we are to outline drawing reference from the hardships of the world whether God who is the supernatural and powerful being is in control of the situation or not.
First and foremost, the world is currently experiencing high inflation rates which have been characterised by an increase in the prices of basic commodities for instance food, clothing among other essentials. Notably, this has served to create a group of very poor people who are living below the poverty line which one dollar per day.However, according to the holy book which is the bible, it documents that God is in omnipotent and omnipresent meaning that He is in every place at any given time. Therefore, He is watching every happening as it is unfolding. In addition to that the bible also documents that suffering in most cases is a s a result of the disobedience and failure to monitor the word of God. Furthermore, the bible also documents some prophecies pertaining to the increased in prices in food commodities and consequently, the living standards. It is worth noting that the bible also documents a better tomorrow after the hardship. In simple terms, it is evident that God is in control of the day to day happening and therefore, need to abide by His stipulated laws and regulations.
On the contrary, we can argue that God is not in control of the happenings in the current world in this sense. On the same point, it is worth noting that the fact that God is not present physically in the world to experience the suffering. Apparently, it is documented in the holy books that God resides in a holy place, in other words heaven which can be said to be a haven of peace and therefore the place is characterised by lack of suffering. Evidently, from a neutral
perspective, this treatment can be seen as being unfair since the human race are required to reside in the earth which is characterised by suffering while God resides in heaven which is a peaceful place that lacks any form of suffering. Furthermore, the fact that God lacks the experience in the suffering of world thus lacks the understanding pertaining to the area. Consequently, it is this fact that serves to show that the God lacks the control on the happenings of the world. In simple terms, the fact that God has no experience in the suffering is the major factor that shows that He lacks the knowledge of the suffering of the human race and consequently, lacks the control over the world.
In addition to that, the issue of insecurity has posed a huge challenge on the world as a whole. On the same point, it is important to note that the bible documents that war is a judgement passed to God. Apparently, in the ancient days, the bible postulates that war was used as a means of enforcing the law of God. Subsequently, this shows that God is in control of the world. On the contrary, the fact that God uses war as a means to enforce His law shows that He clearly uses suffering to humans to pass an important reason. Consequently, this shows that he lacks the understanding of human suffering since he uses suffering to pass lesson as opposed to other ways of achieving the same. In summation, it is clear that God has the interest of man at heart since the bible documents that He offered His only son to atone for the since of the human race. Evidently, this shows His depth of love towards the humans.
In conclusion, from the research we can conclude that God clearly oversees the happenings of the humans since He is a supernatural being. To this end, there is the need to follow the laws of God since in this way a good life free of suffering is assured.
Work cited
 Dwight, Timothy, John Trumbull, and Sereno Edwards Dwight. Theology; explained and defended in a series of sermons;. Middletown, Conn: Printed by Clark and Lyman, for Timothy Dwight, New Haven, 181819. Print.
 Hodge, Charles. Systematic theology. Grand Rapids: Eerdmans, 1952. Print.
 Paine, Thomas. Age of reason: being an investigation of true and fabulous theology. New York: Willey Book Co., 194. Print.
 Paley, William, and Matthew Eddy. Natural theology or, evidence of the existence and attributes of the deity, collected from the appearances of nature. Oxford: Oxford University Press, 2006. Print.
 White, Andrew Dickson. A history of the warfare of science with theology in Christendom. Champaign, Ill.: Project Gutenberg, 199. Print. Read More
Share:
Tags
Cite this document
(“God is/is not in control of everything Research Paper”, n.d.)
Retrieved from https://studentshare.org/religion-and-theology/1635159-god-isis-not-in-control-of-everything

(God is/Is Not in Control of Everything Research Paper)
https://studentshare.org/religion-and-theology/1635159-god-isis-not-in-control-of-everything.

“God is/Is Not in Control of Everything Research Paper”, n.d. https://studentshare.org/religion-and-theology/1635159-god-isis-not-in-control-of-everything.
Comments (0)
Click to create a comment or rate a document

The price of Everything

God is Not Great: How Religion Poisons Everything

... Instruction: Task: Summary The proposed piece of published nonfiction writing is ‘God is Not Great: How Religion Poisons Everything’, that condemns the absence of God. The book is written by Christopher Hitchens and makes claims that organized religion is both violent and irrational. In the controversial text, the author attacks established norms and beliefs in religions such as Islam, Jewish and even Christianity. The former journalist is also touching on a subject deemed taboo because it casts God as a non-existent being (Hitchens 67). Therefore, the writing qualifies to be risky because like in other similar writings, Hitchens uses derogatory facts, and logical arguments to support the statements. On that note, his book is riskier than...
4 Pages(1000 words)Essay

Is Everything an Argument

...?Everything is an argument Idea presentation as part of argument The term argument has been used widely in conversations with diverse meaning. However, several perceptions exist that make the understanding of the term argument. It is viewed with negativity making understanding of the concept differently. In response to the statement on everything being an argument, it is true but depends on the level of understanding of the concept of argument which may not be clearly stipulated unless the audience will be able to understand the opinion or view of the author. Several types of argument exist based on the nature and type of the argument. In response to the different social issues, the argument may be classified as forensic, deliberative...
3 Pages(750 words)Essay

Everything About Molecular Biology

Scientists gradually learned about DNA in a curiously twisted fashion that is common in science. For one thing, the discovery of DNA required to progress on three separate fronts: cytology (the study of cells through a microscope), genetics, and chemistry. Scientists working on DNA in the early 1950s used the term "gene" to mean the smallest unit of genetic information, but they did not know what a gene actually looked like structurally and chemically, or how it was copied, with very few errors, generation after generation. Nevertheless, many scientists continued to believe that DNA had a structure too uniform and simple to store genetic information for making complex living organisms. The genetic material, they reasoned, must con...
6 Pages(1500 words)Assignment

Google is Changing Everything

...Philosophy Philosophy Which premise or premises fail and why God’s existence in the world has become a continuous argument amongst various religious groups. From the traditional point of view, despite race, cultures or denominations, all humans believe that there was a beginning of the earth. A super natural being is said to be behind the creation since the earth was formless. This super natural being is believed to be in charge of everything although the god varies according to ones belief e.g. Hindus’ god is represented by a cow, Muslims’ is Mohammed; they all converge to one God. Being a belief, it has sent different opinions thus leaving everyone to hold onto their own religions believe (Plantinga, 2009). Here, premise 2 fails...
2 Pages(500 words)Essay

Everything flows by Vasily Grossman

...Everything Flows By Vasily Grossman Everything Flows By Vasily Grossman The book, Everything Flows by the Grossman Vasily provides a detailed revelation to one of the key historical event; the release of thousand prisoners from Gulag in the 1950s. The release of Russian prisoners took place during Stalin’s anniversary in 1956. In reading the book, the reader identifies that Ivan the main protagonist returns to Moscow after twenty years in the camp. Ivan decides to meet his cousin Nikolary Andreyevich, a successful scientist. In writing the words, "In the beginning was the word... That is truly so" Grossman Vasily tries to describe Ivan’s state of both mental and physical state after leaving the camp and returning home. Although Ivan...
1 Pages(250 words)Essay

Everything in Time Management

The presentation’s ideas on motivation are impressive. The knowledge of internal and external motivation can help people know how to control the impacts of undesirable sources of motivation (Adams 24). This knowledge is important to people especially students because of the negative effects of peer pressure.
The anecdote of brick walls is suitable in the discourse of prioritization, adjustment, and redirection of an individual’s attention and energy. The presentation’s exposition on time management has valuable information. The six components of time management are workable and individuals can cultivate and master them without difficulty. I think the idea of self-assessment can be instrumental to an individu...
1 Pages(250 words)PowerPoint Presentation

Find everything related to food

... History Lessons Ben Franklin was a person who was well known for recreating older sayings found in Poor Richard’s Almanack. He was also a musician and an inventor and he brought new melody and designs to timeworn sayings. His thirteen virtues to live by were crafted from Poor Richard’s Almanack. 1He advised people to be temperate in cloth, girls, in eating to prevent gout from controlling and plaguing them. Franklin savored his food and used clothing to influence the people’s perception of him. It is important to note that even with all this knowledge, he was plagued by gout for the majority of his life. The continental army who were stationed at Valley Forge tried to obtain food from the local farms during the encampment in winter.2...
2 Pages(500 words)Essay
sponsored ads
Save Your Time for More Important Things
Let us write or edit the research paper on your topic "God is/is not in control of everything" with a personal 20% discount.
GRAB THE BEST PAPER

Let us find you another Research Paper on topic God is/is not in control of everything for FREE!