Comments (0)
Add to wishlistDelete from wishlist
Cite this document
Summary
It is said that whoever follows Islam and it’s all the rules will eventually go to heaven in the afterlife. It is also said that Islam covers all the fields of life and has a full explanation on how to live…
Download full paperFile format: .doc, available for editing
HIDE THIS PAPERGRAB THE BEST PAPER93.4% of users find it useful 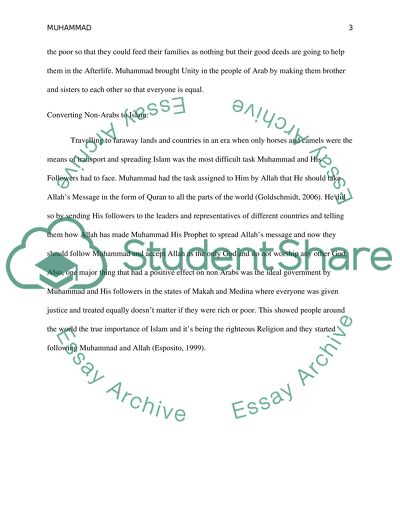 Muhammad Muhammad Religious Roots: Islam has been known to be the most completed of all the religions. It is said that whoever follows Islam and it’s all the rules will eventually go to heaven in the afterlife. It is also said that Islam covers all the fields of life and has a full explanation on how to live one’s life in the best possible ways. Muhammad came in this world as the Prophet of Allah and started spreading Islam. The main religious root used by Muhammad was that God is one. Muhammad said that there are no different Gods for different communities and people but one, who made this entire universe, has control of everything and He has written the fate of everything living or dead in this world. Muhammad used oneness of God as the main religious root since under one God and one religion, people of the world would be one.
Religious and Political Success:
Muhammad as a person before He declared Himself the Prophet of Allah was respected in Arab. He was known to be the honest and respectful; He was kind to the ones younger than him and respected the one older. Muhammad used his previous reputation of being ‘Sadiq’ and ‘Ameen’ (one who is true and trust worthy) to spread Islam (Goldschmidt, 2006). He went and talked to the leaders of different Arabian tribes and told them how Allah has revealed His messages upon Him through Allah’s Angels and asked Muhammad to spread Allah’s final and complete religion. He told the people of Arab that Allah has bestowed upon the world with the fortunes that are there for the people to use and but in the most righteous way. Muhammad Went to the poor to help them when they needed Him and asked the rich to give away their fortunes to the poor so that they could feed their families as nothing but their good deeds are going to help them in the Afterlife. Muhammad brought Unity in the people of Arab by making them brother and sisters to each other so that everyone is equal.
Converting Non-Arabs to Islam:
Travelling to faraway lands and countries in an era when only horses and camels were the means of transport and spreading Islam was the most difficult task Muhammad and His Followers had to face. Muhammad had the task assigned to Him by Allah that He should take Allah’s Message in the form of Quran to all the parts of the world (Goldschmidt, 2006). He did so by sending His followers to the leaders and representatives of different countries and telling them how Allah has made Muhammad His Prophet to spread Allah’s message and now they should follow Muhammad and accept Allah as the only God and do not worship any other God. Also, one major thing that had a positive effect on non Arabs was the ideal government by Muhammad and His followers in the states of Makah and Medina where everyone was given justice and treated equally doesn’t matter if they were rich or poor. This showed people around the world the true importance of Islam and it’s being the righteous Religion and they started following Muhammad and Allah (Esposito, 1999).
References
Goldschmidt, A., & Davidson, L. (2006). A concise history of the Middle East. Boulder, Colo: Westview Press.
Esposito, J. L. (1999). The Oxford history of Islam. New York, N.Y: Oxford University Press. Read More
Share:
Tags
Cite this document
(“Muhammad Essay Example | Topics and Well Written Essays - 500 words”, n.d.)
Muhammad Essay Example | Topics and Well Written Essays - 500 words. Retrieved from https://studentshare.org/history/1625604-muhammad

CHECK THESE SAMPLES OF Muhammad

Got Milk It's Good for You-- Unless It's Contaminated

...? The Prophet Muhammad September 18, The story of the Prophet Muhammad includes both favorable and unfavorable opinions. The research delves on gathering books proving Muhammad was mentally ill and a liar. The research delves on proving that Prophet Muhammad is a true prophet of God. Evidences tilt the balance, in terms of Muhammad’s legitimacy as the ultimate prophet of God. One author, Lionel Attwell, gave the proposal that Muhammad was mentally ill (2007). Muhammad’s father died prior to his birth. His mother died shortly after his birth. Muhammad’s Uncle took and grandfather took care of...
4 Pages(1000 words)Essay

...Muhammad (Peace Be Upon Him) - The Prophet of Islam Before the advent of Islam, Arabia was inhabited by warring tribes, whose inter-tribal feuds lasted for generations, and at times culminated in bloody conflicts in which hundreds of precious lives were lost. The awakening and knowledge of truth had given way to ignorance so that God has been replaced by idol worship, and mankind and inanimate objects were adored. To some, man was a deity; to others, son of God; some were materialists and some others took their own souls as God. The sun was worshipped, the moon and the stars were regarded as Gods. Men worshipped animals, trees and rocks. They bowed before rocks. The bowed before fire, water, air, and dust. In short, everything... -Islamic...
6 Pages(1500 words)Essay

...Muhammad Ali Draft refusal Introduction Muhammad Ali, who was born as Cassius Clay in 1942, is one of the greatest boxing icons in the world, whose personality has emerged as controversial, giving him honor and making him vilified at the same time. He changed his name later, after joining a new religious organization which was called the Nation of Islam, established in Detroit Michigan in 1930, to improve the spiritual, the social, the economic and the general welfare of the Africans Americans in the USA (Bingham and Max, 7). Through his exemplary boxing skills, and his wonderful character, he emerged as the most famous athlete in the world, which culminated with his being crowned the Sportsman of the...
2 Pages(500 words)Thesis

How social network has bad effect on people

Muhammad and the believers

...Muhammad and the believers al Affiliation) Fred McGraw Donner Tittle of book: Muhammad and the Believers Place of publication: New York Publisher: The Belknap Press of Harvard University Number of pages: 304 pages ISBN: 9780674050976 The book offers a vision on how Islam evolved. The book is written by the author and was intended to address the Christians and the Jews. The author of the book argues that the origin of the religion lies in believer’s movement which was begun by Prophet Muhammad. The movement was that which was of religious reforms which mainly emphasized on righteous behavior and monotheism with conformity with revealed law of God. Those that were in the movement and were addressed by the author were the righteous... ...
5 Pages(1250 words)Book Report/Review
sponsored ads
Save Your Time for More Important Things
Let us write or edit the essay on your topic "Muhammad" with a personal 20% discount.
GRAB THE BEST PAPER

Let us find you another Essay on topic Muhammad for FREE!