Comments (0)
Add to wishlistDelete from wishlist
Cite this document
Summary
The early Ecumenical Councils were pivotal in the development of such doctrines which served as a foundation for the church and Christianity. When Christianity became a legal religion in the Roman Empire…
Download full paperFile format: .doc, available for editing
HIDE THIS PAPERGRAB THE BEST PAPER97.1% of users find it useful 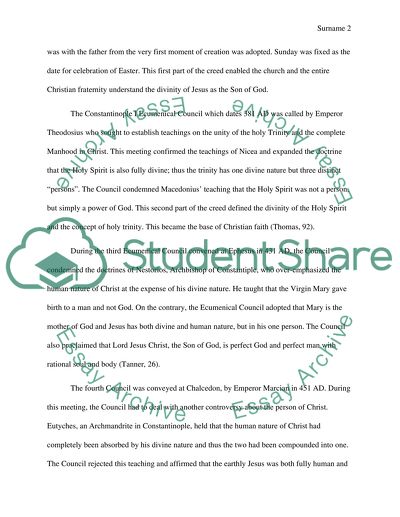 Download file to see previous pages The first Ecumenical Council known as Nicea, dates 325 AD. It was summoned by Emperor Constantine the great. This meeting was called to resolve the Arian controversy. Arius, a priest from Alexandria, held that Jesus Christ was created by God and was denying Christ’s divinity. He argued that if Jesus was born, then there was a time he did not exist. However, during this meeting, the Nicene Creed which formulated that Jesus is divine, as the father, and was with the father from the very first moment of creation was adopted. Sunday was fixed as the date for celebration of Easter. This first part of the creed enabled the church and the entire Christian fraternity understand the divinity of Jesus as the Son of God.
The Constantinople I Ecumenical Council which dates 381 AD was called by Emperor Theodosius who sought to establish teachings on the unity of the holy Trinity and the complete Manhood in Christ. This meeting confirmed the teachings of Nicea and expanded the doctrine that the Holy Spirit is also fully divine; thus the trinity has one divine nature but three distinct “persons”. The Council condemned Macedonius’ teaching that the Holy Spirit was not a person, but simply a power of God. This second part of the creed defined the divinity of the Holy Spirit and the concept of holy trinity. This became the base of Christian faith (Thomas, 92).
During the third Ecumenical Council convened at Ephesus in 431 AD, the Council condemned the doctrines of Nestorios, Archbishop of Constantiple, who over-emphasized the human nature of Christ at the expense of his divine nature. He taught that the Virgin Mary gave birth to a man and not God. On the contrary, the Ecumenical Council adopted that Mary is the mother of God and Jesus has both divine and human nature, but in his one person. The Council also proclaimed that Lord Jesus Christ, ...Download file to see next pagesRead More
Share:
Tags
Cite this document
(“In what ways did the early Christians Ecumenical Councils develop the Research Paper”, n.d.)
In what ways did the early Christians Ecumenical Councils develop the Research Paper. Retrieved from https://studentshare.org/religion-and-theology/1634359-in-what-ways-did-the-early-christians-ecumenical-councils-develop-the-churchs-understanding-of-jesus

...Why it is important to acknowledge that there are many ways of understanding organization, and what impact has this on the management of organizationlife? Introduction To begin with, an organization is a collective set of individuals who work hand in hand with each other to bring the processes and activities to a conclusion which is for the betterment of the business enterprise and the people who work under its aegis. The organization is therefore dependent on how well its resources are being deployed and the manner under which success is achieved in entirety. It is significant to comprehend how the organizational value will come about more so when the employees are focused on getting the job done, making use of resources...
10 Pages(2500 words)Essay

An Outline of Nichols’s Treatment of the Relationship between Theologians and the Magisterium According to the Dogmatic Constitution of the Church, lumen Gentium, the magisterium, i.e the pope and the bishops of the Catholic Church constitute the teaching authority of the Church. Having direct apostolic succession from the disciples of Jesus Christ, the magisterium of the Church has legitimate authority from Jesus Christ himself to preach and to spread the Gospel everywhere, to the ends of the world. As such, the catholic faithful are expected to faithfully respect and obey the teachings and the directives of the magisterium. But, although the Magisterium derives its authority from Jesus Christ himself, due to natural human limit...
12 Pages(3000 words)Essay

School councils are democratically elected groups who represent their peers and enable pupils to become partners in their own education, making a positive contribution to the school environment and ethos. (Wyse 2001)
School councils make a positive contribution to every aspect of the school community. They:
improve academic performance
reduce bullying and vandalism
reduce school exclusions
improve teacher-pupil relations (Daniels and Ivatts 2003)
School Councils have been used in British schools for about the past ten years. According to a BBC News report, School councils - giving students a say in how their schools are run - are given a vote of confidence by researchers." (2005) They suggest that student...
2 Pages(500 words)Essay

The Churchs Teaching On Euthanasia

... will be dependent on them in order to eliminate agonizing pain. Thus, people who suffer severe illnesseses or diseases may still suffer intense pain from time to time in the absence of pain relievers. This intense pain from the point of view of doctors and other related medical practitioners and experts or even family members may be more than what the humanity can bear. A person suffering from severe pain may not deserve to experience it from a humanitarian point of view. Thus, euthanasia or an act of mercy killing has become one of the most debatable issues in contemporary time because for some it might be the right answer but for others it is the wrong way around. For instance, Catholic Church strongly opposes euthanasia. It is evident...
6 Pages(1500 words)Assignment

Agnes shows the image of Mary placed between St. Peter and St. Paul with her arms extended towards the two saints. The increased interest in the Virgin Mary that was evident during the catacombs came about as a result of a new doctrine by the Church Fathers who represented the Virgin Mary as the “New Eve”. The church fathers taught that just in the same way that Eve had played an important role in bringing the downfall of Adam, the Virgin Mary as the New Eve had played an important role in the redemptive ministry of Jesus who was seen as the new Adam. According to this teaching, both Eve and Mary had played secondary but significant roles in the lives of Adam and Jesus2.
Ideally, this understanding was not popular in the Apost...
14 Pages(3500 words)Essay

...Early Christians Introduction Islam spread faster than Christianity did in the early ages. The reasons for the difference were inthe uniqueness of the structures of the two religions. Christianity was among the earliest religions in the world. Islam on the other hand came into being later at a time when the Roman Catholic had its 69th pope. Despite its late entrance, the structure of Islam enhanced the aggressive nature with which it spread. The Arab empire spread rapidly after the death of Prophet Muhammad through systematic caliphates. The caliphates occupied large geographical areas extending from the Middle East to Northern Africa. The creation of Islamic territories through the expansion of the Arab Empire enhanced the rapid spread...
1 Pages(250 words)Essay

How Christians Belief about Jesus Guides them to Confront Evil

In Romans chapter twelve verse seventeen, Christians are told; “repay no one evil for evil, but give thought to do what is honorable in the sight of all” (Rom 12: 17). When abiding by this command, in real life, Christians choose to forgive and forget. Take an example of this situation.
Jane and Catherine have been friends since childhood. They live together and share expenses. They contribute the same amount to pay rent, do some shopping and buy other household items. One time, the two decided that it was time for them to live separate lives. To help each other, they agreed to buy the household items in two phases, using the money they had saved. Jane was to receive the first batch, and Catherine the last. This,...
4 Pages(1000 words)Essay

Whereas, in the case of the Schweitzerbahn camp, Wright takes a sceptical view stand, since this camp proposed that a great deal can be learnt from the life of Jesus but within the context of Judaism, with the viewpoint being eschatological.
This research paper makes a critical analysis of the viewpoint of N.T. Wright by drawing comparisons and contrasts with the works of other authors like Marcus Borg, Carrey Newman and Mark Allen Powell while highlighting the fact that the life of Jesus can be best understood from the Bible. Secondary researches were also undertaken in order to accrue authentic data to satisfy the proposed objectives.
The research findings allowed the author N.T Wright to understand the life of Jesus in as...
31 Pages(7750 words)Assignment
sponsored ads
Save Your Time for More Important Things
Let us write or edit the research paper on your topic "In what ways did the early Christians Ecumenical Councils develop the Churchs understanding of Jesus" with a personal 20% discount.
GRAB THE BEST PAPER

Let us find you another Research Paper on topic In what ways did the early Christians Ecumenical Councils develop the Churchs understanding of Jesus for FREE!