The Concept of God in Islam - Essay Example

Comments (0)
Add to wishlistDelete from wishlist
Cite this document
Summary
The researcher of the following paper claims that God in Islam means one entity that is the Supreme Power and is the sovereign. God has 99 names of which, Allah is the most frequently used name. “The term [Allah] has no plural or gender” (“Concept of God”)…
Download full paperFile format: .doc, available for editing
HIDE THIS PAPERGRAB THE BEST PAPER98.3% of users find it useful 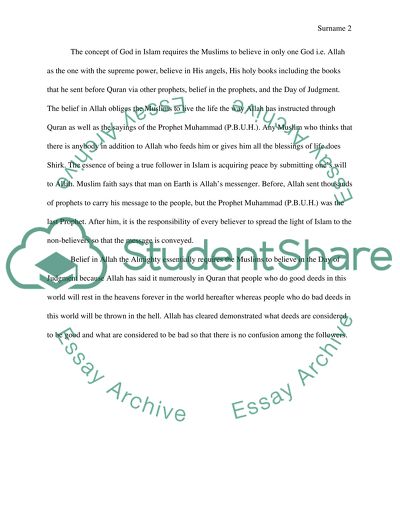 Extract of sample "The Concept of God in Islam"

23 September The Concept of God in Islam God in Islam means one entity that is theSupreme Power and is the sovereign. God has 99 names of which, Allah is the most frequently used name. “The term [Allah] has no plural or gender” (“Concept of God”). Allah has clearly described Himself in Quran in the Surah Ikhlas. In Surah Ikhlas, Allah reveals several truths about Himself that include that Allah is one. The translation of Surah Ikhlas goes as follows, “He is Allah, Who is the One. Allah is the Transcendent of all, the Protector and Far-Superior to all. He has not begotten any nor is He begotten. Nor is there anyone equal to Him” (Surah Ikhlas cited in “112- Surah Al Ikhlas”).
This Surah overtly explains the superiority of Allah in all ways. It is revealed that nobody gave birth to Allah nor has Allah any son of daughter, which clearly refutes the claim that the Christ is God’s son, and this is what lays the basis of difference in the Christian and the Muslim perspective of God Almighty. It has been declared that nobody is equal to Allah in any respect, which essentially obviates the need for any gods or goddesses. This is why Muslims believe in no gods and goddesses but one God who is Allah. “Accurately knowing Allah is the pillar whereupon Islam in its entirety hinges” (Al-Jibouri). Since Allah is the supreme power, He can handle everything himself and does not require any other god or goddess to help Him in His matters, nor is there any god or goddess because Allah did not make any. However, Allah made angels that carry out His orders and do as He directs them.
The concept of God in Islam requires the Muslims to believe in only one God i.e. Allah as the one with the supreme power, believe in His angels, His holy books including the books that he sent before Quran via other prophets, belief in the prophets, and the Day of Judgment. The belief in Allah obliges the Muslims to live the life the way Allah has instructed through Quran as well as the sayings of the Prophet Muhammad (P.B.U.H.). Any Muslim who thinks that there is anybody in addition to Allah who feeds him or gives him all the blessings of life does Shirk. The essence of being a true follower in Islam is acquiring peace by submitting one’s will to Allah. Muslim faith says that man on Earth is Allah’s messenger. Before, Allah sent thousands of prophets to carry his message to the people, but the Prophet Muhammad (P.B.U.H.) was the last Prophet. After him, it is the responsibility of every believer to spread the light of Islam to the non-believers so that the message is conveyed.
Belief in Allah the Almighty essentially requires the Muslims to believe in the Day of Judgment because Allah has said it numerously in Quran that people who do good deeds in this world will rest in the heavens forever in the world hereafter whereas people who do bad deeds in this world will be thrown in the hell. Allah has cleared demonstrated what deeds are considered to be good and what are considered to be bad so that there is no confusion among the followers.
Works Cited:
Al-Jibouri, Yasin T. Allah: The Concept of God in Islam. Iran: Ansariyan Publications, n.d.
“Concept of God in Islam.” WAMY Series: On Islam No. 9. n.d. Web. 24 Sep. 2012.
.
“112- Surah Al Ikhlas (Purity) English translation (1-4).” 12 June 2010. Web. 24 Sep. 2012.
. Read More
Share:
Tags
Cite this document
(“Essay Example | Topics and Well Written Essays - 500 words - 95”, n.d.)
Essay Example | Topics and Well Written Essays - 500 words - 95. Retrieved from https://studentshare.org/religion-and-theology/1603476-essay

CHECK THESE SAMPLES OF The Concept of God in Islam

Use of intravenous quinine sulfate remains to treat severe malaria

Microsoft and its investment in Ireland

16 Pages(4000 words)Essay
sponsored ads
Save Your Time for More Important Things
Let us write or edit the essay on your topic "The Concept of God in Islam" with a personal 20% discount.
GRAB THE BEST PAPER

Let us find you another Essay on topic The Concept of God in Islam for FREE!