Comments (0)
Add to wishlist Delete from wishlist
Cite this document
Summary
The writer of this essay seeks to draw a comparison and contrast between the development of mythology in Norses and Greeks. Overall, the creation myths and deity structure of the Greeks and the Norse served to place importance on the same basic elements of life…
Download full paper File format: .doc, available for editing
HIDE THIS PAPERGRAB THE BEST PAPER98.6% of users find it useful 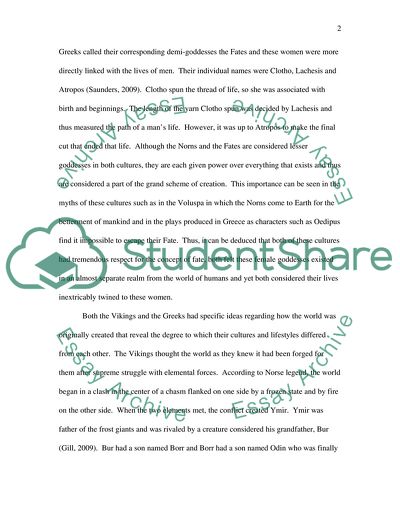 Download file to see previous pages A comparison of creation myths can be very enlightening regarding the values and needs of the people who hold it. Two major cultures that had a great deal in common regarding their creation myths despite great differences in climate were the Greeks and the Norse.
Overall, the creation myths and deity structure of the Greeks and the Norse served to place importance on the same basic elements of life. Both societies held a strong belief in the idea of fate. This concept was represented in both cultures by three female deities. In Norse mythology, these women were called the Norns and were considered demi-goddesses. They also had individual names including Urd (fate), Verdandi (necessity) and Skuld (being) (Lindemans, 1998). Together, they had the primary duty of caring for Yggdrasil, the world tree, which connected all the worlds together, but they also assisted with childbirth and helped determine the course of a person’s life path. The Greeks called their corresponding demi-goddesses the Fates and these women were more directly linked with the lives of men. Their individual names were Clotho, Lachesis, and Atropos (Saunders, 2009). Clotho spun the thread of life, so she was associated with birth and beginnings. The length of the yarn Clotho spun was decided by Lachesis and thus measured the path of a man’s life. However, it was up to Atropos to make the final cut that ended that life. Although the Norns and the Fates are considered lesser goddesses in both cultures, they are each given power over everything that exists and thus are considered a part of the grand scheme of creation. This importance can be seen in the myths of these cultures such as in the Voluspa in which the Norns come to Earth for the betterment of mankind and in the plays produced in Greece as characters. ...Download file to see next pages Read More
Share:
Tags
Cite this document
(“Norse vs. Greek Mythology Essay Example | Topics and Well Written Essays - 1250 words”, n.d.)
Norse vs. Greek Mythology Essay Example | Topics and Well Written Essays - 1250 words. Retrieved from https://studentshare.org/religion-and-theology/1564972-mythology-creationplease-read-the-order-instructions

CHECK THESE SAMPLES OF Norse vs. Greek Mythology

... The Norse Religion and Mythology The Norse mythology is part of the wider Germanic Mythology and it flourished before the Scandinavian countries were Christianized. This mythology refers to the legends, beliefs and myths of the Norse Pagans’ supernatural beings. Norse paganism refers to the religious beliefs of the Norsemen and it was practiced in northern and central Europe. This mythology is the study of the Germanic myths (Iceland, Germany, Norway, Sweden, Faroe Islands and Denmark). The Norse societies later adopted Christianity because the Norse religion was not as strong as other religions. Lindow says that this mythology developed slowly over the years and the importance of different heroes and gods kept varying with time and place...
5 Pages (1250 words) Research Paper

...GREEK MYTHOLOGY Running Head: GREEK MYTHOLOGY GREEK MYTHOLOGY R.PREETI 5/11/2007 Are their any particular cultures that you associate with the notion of myth One of the cultures that possesses a strong mythological connection and identity stamped on it, is that of the Greek Culture. We surely have a number of references made to the Greek culture, in our day-to-day lives, be it in literature, art, music or any other form that is rich with mythological significance. The Greek legends of Eros, Jupiter, Venus, Mars, Pandora and the like are surely a part of our 21st century lives today, in some form or the other! For instance, the planets bear...
Pages (0 words) Essay

... argues that war is something families and communities loathe, for it reduces the younger population and weakens the political or public domain by depriving it with great leaders. People see justice as a notion based on reason, established in their societies or communities, but they have a rigid feeling about justice as well, within the community and the family. The vengeance philosophy of war attached to those firm sentiments in the play of Homer and Aeschylus remains open to challenges. References Johnston, I. The Oresteia. Arlington, Virginia: Richer Resources Publications, 2007. Spies, K. The Iliad and the Odyssey in Greek Mythology. New York: Enslow Publishers, 2002....
2 Pages (500 words) Essay

... from a victorious capture of Troy in the decades-long Trojan War. Earlier he had sacrificed his and Clytemnestra’s daughter, Iphigenia, as a token to ask the goddess, Artemis to bring good winds for the Greeks. This sacrifice saddened Clytemnestra who plotted to kill Agamemnon with Aegisthus who also wanted revenge from Agamemnon. However, on the war end, Troy had been successfully captured and the news was brought home and Agamemnon returned to Argos with Cassandra, daughter of Prius, as a war prisoner. Clytemnestra asks Agamemnon to enter the palace walking over a purple fabric however the King was apprehensive of angering the Gods by this act of extravagance. However, Agamemnon is finally made to walk over the purple fabric as it leads...
6 Pages (1500 words) Essay

Characteristic of a fresco, the piece is made with secco placed on plaster and wood. Originally part of the church structure, the entire fresco was removed and went through several sales before being acquired by the Boston museum. Part of its ability to astound is its massive size. It measures approximately 21 feet at its tallest point and more than 12 feet across. Because it was originally intended to decorate the interior of a small circular area of the church, it is not flat either, but rather has a concave presentation forcing the museum to dedicate approximately 9 feet of space in depth to accommodate it. As a result of its origins and intent, as well as age and travels, the piece has sustained heavy damage, particularly alon...
7 Pages (1750 words) Assignment

According to Vitruvius good structures must fulfill three main aspects, namely: utility, durability, and beauty. He might have been the first global or roman individual in architecture, but his work first among the documented work of ancient Roman architects.
As time went by the Roman architecture spread to the western world and the other parts of the world. One of the countries whose building activities were affected by the ancient Roman and Greek architecture was the United States of America. This paper aims at discussing how ancient Greek and Roman architecture has greatly influenced American government and public service buildings.
In the development of this report, there are a number of literature materials that wer...
6 Pages (1500 words) Assignment

The main differences between the approaches made by American society and the Barbarian society were the purpose behind the invasions. The American society invaded Afghanistan after facing violent attacks from the Islamic anti-social groups. However, the Barbarian invasions in Rome signified the use of power by the leaders in order to capture territories and increase their kingdom. The main purpose behind the attacks made by the U.S. administration was to eliminate the terrorist groups from the world and make the world free f...
10 Pages (2500 words) Essay
sponsored ads
Save Your Time for More Important Things
Let us write or edit the essay on your topic "Norse vs. Greek Mythology" with a personal 20% discount.
GRAB THE BEST PAPER

Let us find you another Essay on topic Norse vs. Greek Mythology for FREE!