Comments (0)
Add to wishlist Delete from wishlist
Cite this document
Summary
Report on religious field research Name Name of institution Professor Course Date Introduction Religion is a collection of beliefs that try to explain the origin of nature and the existence of a supernatural power that controls humanity and the universe’s contents…
Download full paper File format: .doc, available for editing
HIDE THIS PAPERGRAB THE BEST PAPER97.8% of users find it useful 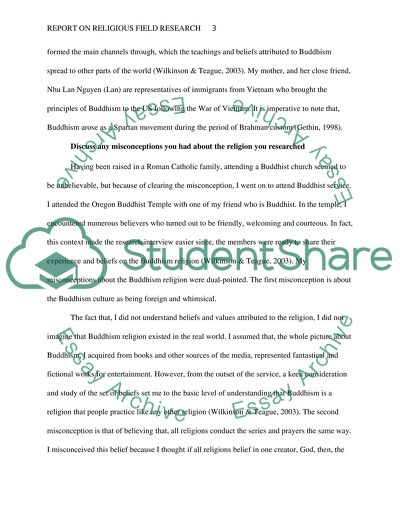 Download file to see previous pages Religion forms the epicenter of human being’s social life. This paper intends to examine the Buddhism religion by attending a church service and interacting with the members of this faith. The church service attendance intends to serve as a channel to understand fully the sentimental attachments of the members to the faith through observation. More over, information will be sought through interviewing. The church of attendance is the Oregon Buddhist Temple in the Northwest District in Oregon (Ganeri, 2002). Further, this paper intends to incorporate any misconceptions that were realized after finding more information about the religion. Further, more this paper will test personal assumptions and perceptions of Buddhism through the intended interaction. Buddhism is one of the most common religions in the globe.   Its roots go back to 563 B.C.E. when Siddhartha Gautama was born.   Gautama is commonly referred to as the “Buddha”, which means the “Awakened One” (Ganeri, 2002).   Buddhism spread speedily all over Asia and other parts of the world. However, this religion remained practically unfamiliar in the West until the last half century.     “The Western scholars; writers and artists, philosophers and the arrival of Asian immigrants brought diverse forms of Buddhism to North America, Australia and Europe” formed the main channels through, which the teachings and beliefs attributed to Buddhism spread to other parts of the world (Wilkinson & Teague, 2003). My mother, and her close friend, Nhu Lan Nguyen (Lan) are representatives of immigrants from Vietnam who brought the principles of Buddhism to the US following the War of Vietnam. It is imperative to note that, Buddhism arose as a Spartan movement during the period of Brahman custom (Gethin, 1998).   Discuss any misconceptions you had about the religion you researched Having been raised in a Roman Catholic family, attending a Buddhist church seemed to be unbelievable, but because of clearing the misconception, I went on to attend Buddhist service. I attended the Oregon Buddhist Temple with one of my friend who is Buddhist. In the temple, I encountered numerous believers who turned out to be friendly, welcoming and courteous. In fact, this context made the research interview easier since, the members were ready to share their experience and beliefs on the Buddhism religion (Wilkinson & Teague, 2003). My misconceptions about the Buddhism religion were dual-pointed. The first misconception is about the Buddhism culture as being foreign and whimsical. The fact that, I did not understand beliefs and values attributed to the religion, I did not imagine that Buddhism religion existed in the real world. I assumed that, the whole picture about Buddhism, I acquired from books and other sources of the media, represented fantastical and fictional works for entertainment. However, from the outset of the service, a keen consideration and study of the set of beliefs set me to the basic level of understanding that Buddhism is a religion that people practice like any other religion (Wilkinson & Teague, 2003). The second misconception is that of believing that, all religions conduct the series and prayers the same way. I misconceived this belief because I thought if all religions belief in one creator, God, then, the God is served in the same way. This was not then case after attending the Buddhism service, settings were different, prayers and services were conducted differently. Analyze how ...Download file to see next pages Read More
Share:
Tags
Cite this document
(“Report on Religious Field Research Essay Example | Topics and Well Written Essays - 1250 words - 4”, n.d.)
Retrieved from https://studentshare.org/religion-and-theology/1476913-report-on-religious-field-research

Should Stonecipher have been forced to resign

The Protestant Ethic and Spirit of Capitalism

... entirely different threats when he took over the helm from Reginald H. Jones in 1981. Back then, the main concerns were foreign competition and a bloated workforce which he had religiously trimmed down. The environment today is vastly different with globalization trends all over. The strategy at G.E. can be summed up in two words: technology and innovation. It is the two words that result in technical leadership which provides those high margins in the past and even today in some of the growth areas it had identified such as health care and renewable energy. G.E. had long left industries where there was price pressure and margins got thinner. By using technical leadership in industries it had chosen, it is possible to produce high-margin...
12 Pages (3000 words) Report
sponsored ads
Save Your Time for More Important Things
Let us write or edit the essay on your topic "Report on Religious Field Research" with a personal 20% discount.
GRAB THE BEST PAPER