Comments (0)
Add to wishlist Delete from wishlist
Cite this document
Summary
Report on Religious Field Research Name: Institution:  Report on Religious Field Research Religion should not be viewed as ignorance, outrageous superstition, nor is it characterized by hate or opposition to a different area of human being venture. Religion entails having faith in a greater thing, something which is beyond human control or understanding…
Download full paper File format: .doc, available for editing
HIDE THIS PAPERGRAB THE BEST PAPER98.3% of users find it useful 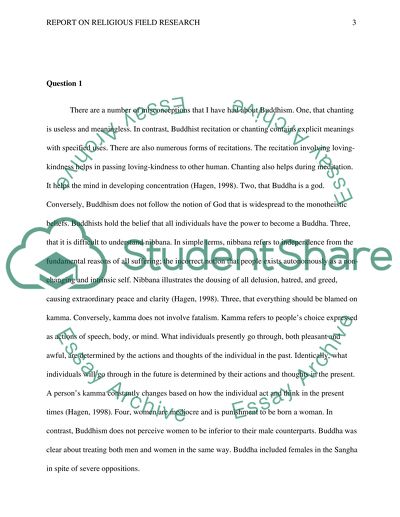 Download file to see previous pages Boundless light is both love and the element of love past the individual or human beings. This activity is not designed by any individual or for any individual. Boundless light is all inclusive. It argues that actual nature entails displaying everything and every individual as absolute love, and one of the forms of love involves the soul (Hagen, 1998). The soul also acknowledges that it is the expression of the love of real nature. In addition, meditation has been identified as a core part of the Buddhist religion. It is not clear the number of Christians who pray, but a large number of Buddhists all through history have not engaged in meditation. Until recent times, mediation has been perceived as a basic activity and is solely practiced by specified monks. Moreover, the Buddha largely laid emphasis on meditation, but a number of traditions, for example, the pure land engage in minimal or no meditation in their activities (Brodd, 2003). This paper will be a report on religious field research. The paper will discuss personal misconceptions on Buddhism, analyze how my previous understanding about Buddhism was changed through my encounter, discuss whether misconceptions about the religion of other people are widespread and an explanation on why or why not, and recommend a minimum of one action that could help lessen misconceptions individuals have about other people’s religion. Question 1 There are a number of misconceptions that I have had about Buddhism. One, that chanting is useless and meaningless. In contrast, Buddhist recitation or chanting contains explicit meanings with specified uses. There are also numerous forms of recitations. The recitation involving loving-kindness helps in passing loving-kindness to other human. Chanting also helps during meditation. It helps the mind in developing concentration (Hagen, 1998). Two, that Buddha is a god. Conversely, Buddhism does not follow the notion of God that is widespread to the monotheistic beliefs. Buddhists hold the belief that all individuals have the power to become a Buddha. Three, that it is difficult to understand nibbana. In simple terms, nibbana refers to independence from the fundamental reasons of all suffering; the incorrect notion that people exists autonomously as a non-changing and intrinsic self. Nibbana illustrates the dousing of all delusion, hatred, and greed, causing extraordinary peace and clarity (Hagen, 1998). Three, that everything should be blamed on kamma. Conversely, kamma does not involve fatalism. Kamma refers to people’s choice expressed as actions of speech, body, or mind. What individuals presently go through, both pleasant and awful, are determined by the actions and thoughts of the individual in the past. Identically, what individuals will go through in the future is determined by their actions and thoughts in the present. A person’s kamma constantly changes based on how the individual act and think in the present times (Hagen, 1998). Four, women are mediocre and is punishment to be born a woman. In contrast, Buddhism does not perceive women to be inferior to their male counterparts. Buddha was clear about treating both men and women in the same way. Buddha included females in the Sangha in spite of severe oppositions. Question 2 My previous understanding of Buddhism was changed through the encounter. First, I developed listening techniques so that I could hear what ...Download file to see next pages Read More
Share:
Tags
Cite this document
(“Report on Religious Field Research Essay Example | Topics and Well Written Essays - 1250 words - 1”, n.d.)
Retrieved from https://studentshare.org/religion-and-theology/1476908-report-on-religious-field-research

Factors in Choosing a Quality Lighting Luminary for a Building

... entirely different threats when he took over the helm from Reginald H. Jones in 1981. Back then, the main concerns were foreign competition and a bloated workforce which he had religiously trimmed down. The environment today is vastly different with globalization trends all over. The strategy at G.E. can be summed up in two words: technology and innovation. It is the two words that result in technical leadership which provides those high margins in the past and even today in some of the growth areas it had identified such as health care and renewable energy. G.E. had long left industries where there was price pressure and margins got thinner. By using technical leadership in industries it had chosen, it is possible to produce high-margin...
12 Pages (3000 words) Report
sponsored ads
Save Your Time for More Important Things
Let us write or edit the essay on your topic "Report on Religious Field Research" with a personal 20% discount.
GRAB THE BEST PAPER