Two of the Gospels, compared and contrasted - Assignment Example

Comments (0)
Add to wishlist Delete from wishlist
Cite this document
Summary
The gospel according to Mathew begins with the genealogy of Jesus. It traces His roots of to King David through Joseph, His father. Jesus had a miraculous conception through the Holy Spirit as Mary conceived before meeting with Joseph. …
Download full paper File format: .doc, available for editing
HIDE THIS PAPERGRAB THE BEST PAPER97.4% of users find it useful 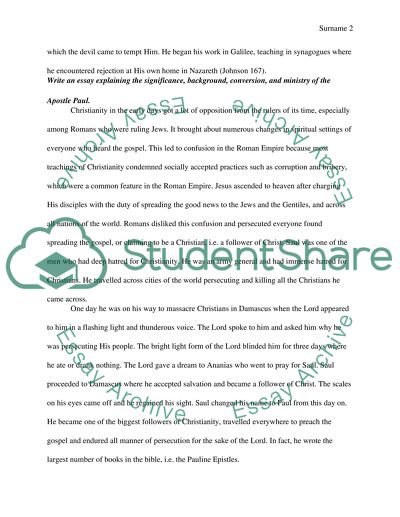 Extract of sample "Two of the Gospels, compared and contrasted"

Download file to see previous pages The gospel according to Mathew begins with the genealogy of Jesus. It traces His roots of to King David through Joseph, His father. Jesus had a miraculous conception through the Holy Spirit as Mary conceived before meeting with Joseph. A star guided visitors from the east to visit Him at Bethlehem. Later on when he was two years old, he escaped with his parents to Egypt when King Herod began killing all children who were less than two years of age. He returned from Egypt after Herod died. John the Baptist announced that Jesus would baptize people with fire and the Holy Spirit. John baptized Jesus afterwards he went to the wilderness and fasted for forty days and forty nights. The devil came to tempt Jesus three times after his fasting. However, he overcame these temptations and began his mission. (Johnson 167). The gospel according to Luke begins with the annunciation of the birth of Jesus Christ by angel Gabriel, six months into the pregnancy of Elizabeth. His conception was miraculous, as Mary did not meet with Joseph before getting pregnant. His birth was at Bethlehem in a manger. A week later, he underwent circumcision in accordance to Jewish customs, and named Jesus. Later on, he underwent purification when presented to the temple for dedication in Jerusalem and met Simeon and Prophetess Anna. At age twelve, he went with His parents to the temple in Jerusalem for the Passover Feast and stayed behind with the Pharisees. John the Baptist baptized Jesus. Afterwards, he went to the wilderness for fasting for forty days and forty nights after which the devil came to tempt Him. He began his work in Galilee, teaching in synagogues where he encountered rejection at His own home in Nazareth (Johnson 167). Write an essay explaining the significance, background, conversion, and ministry of the Apostle Paul. Christianity in the early days got a lot of opposition from the rulers of its time, especially among Romans who were ruling Jews. It brought about numerous changes in spiritual settings of everyone who heard the gospel. This led to confusion in the Roman Empire because most teachings of Christianity condemned socially accepted practices such as corruption and bribery, which were a common feature in the Roman Empire. Jesus ascended to heaven after charging His disciples with the duty of spreading the good news to the Jews and the Gentiles, and across all nations of the world. Romans disliked this confusion and persecuted everyone found spreading the gospel, or claiming to be a Christian, i.e. a follower of Christ. Saul was one of the men who had deep hatred for Christianity. He was an army general and had immense hatred for Christians. He travelled across cities of the world persecuting and killing all the Christians he came across. One day he was on his way to massacre Christians in Damascus when the Lord appeared to him in a flashing light and thunderous voice. The Lord spoke to him and asked him why he was persecuting His people. The bright light form of the Lord blinded him for three days where he ate or drank nothing. The Lord gave a dream to Ananias who went to pray for Saul. Saul proceeded to Damascus where he accepted salvation and became a follower of Christ. The scales on his eyes came off and he regained his sight. Saul changed his name to Paul from this day on. He became one of the biggest followers of Christianity, travelled everywhere to preach the gospel and endured all manner of persecution for the sake of the Lord. In fact, he wrote the largest number of books in the bible, i.e. the Pauline Epistles. Based on the principles and tools for interpreting the Bible given in Unit 3 (historical context, literary context, genre, etc.) and the discussion of Paul’s letters in the book and in Unit 9, explain how you ...Download file to see next pages Read More
Share:
Tags
Cite this document
(“Two of the Gospels, compared and contrasted Assignment”, n.d.)
Two of the Gospels, compared and contrasted Assignment. Retrieved from https://studentshare.org/religion-and-theology/1475712-essay-questions

“Two of the Gospels, Compared and Contrasted Assignment”, n.d. https://studentshare.org/religion-and-theology/1475712-essay-questions.
Comments (0)
Click to create a comment or rate a document

CHECK THESE SAMPLES OF Two of the Gospels, compared and contrasted

The use of descriptive statistics in this study may not really be justified. The basic purpose of using descriptive
statistics and deriving the central tendency of a distribution is in order to deal with large volumes of data (Trochim, 2002). It offers a means to simplify data where there may be several quantitative measures or a lar...
10 Pages (2500 words) Literature review

Interacting with persons of vastly dissimilar societal backgrounds has become commonplace and necessary. This has opened the doorway of all nations for members of terrorist groups, who openly despise Western cultures, to infiltrate which has lead to mortally dangerous and economically disastrous consequences. Terrorist acts in a particular country affect the people and property of that nation but severely threatens the economic prosperity of all nations in this inter-connected world. This discussion examines the paradox of globalization, that it supplies both the vehicle and justification for terrorist’s actions. The fear of terrorism is one of personal safety for the average person but, arguably, the greatest threat is fina...
10 Pages (2500 words) Assignment

Depending on Others: Two Differing Viewpoints Examined

Its located in one of the driest areas that are covered with approximately more than 90% by deserts with very few lakes and rivers to obtain the freshwater in order to sustain a population of 25.7 million. Its average annual precipitation ranges from 80mm-140mm (Depledge 208).
This report aims at comparing two feasible water provision methods that should be enacted in Saudi Arabia. The two proposed methods are water recycling and desalination with respect to basic two requirements, environmental impact and cost. Through the comparison and analysis, I will suggest which of the aforementioned methods best suites in Saudi Arabia.
Water recycling is the managing and treating of the industrial, agricultural or urban wastewa...
6 Pages (1500 words) Assignment
sponsored ads
Save Your Time for More Important Things
Let us write or edit the assignment on your topic "Two of the Gospels, compared and contrasted" with a personal 20% discount.
GRAB THE BEST PAPER

Let us find you another Assignment on topic Two of the Gospels, compared and contrasted for FREE!