Comments (0)
Add to wishlist Delete from wishlist
Cite this document
Summary
Progressive Islam seeks to make Islamic religion more accommodative to all. Every religion has its roots and Islam is not an exception. Islam came about from a society that had its traditions, its geography, and history. …
Download full paper File format: .doc, available for editing
HIDE THIS PAPERGRAB THE BEST PAPER94.3% of users find it useful 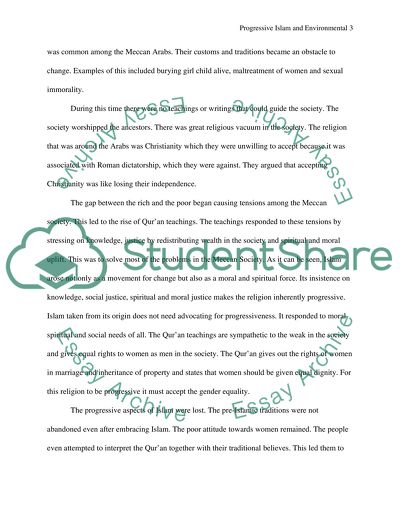 Download file to see previous pages Any change in Islamic region has often been resisted because it was seen as bringing about western values into the religion. However, with globalization there is need for inter-religious interaction. This necessitates for religions being more accommodative to other religions. This is why many organizations have come about to bring about progress in Islam. This is aimed at making the religion more flexible and only to be based on Islam values and not on strict and rigid rules. This paper discusses the progressive Islam and the environment in which it operates. It is first important to look at the history of Islam in order to discover the need for progressive Islam. By the end of the section you will discover that Islam in itself was not such a strict and rigid religion. The pre-Islamic Arab society was made up of unbelievers. There was need for change at social and political and moral and spiritual level. The need for change at moral and spiritual level met greater resistance than need for change at social and political level. This is because the Meccan Society was spiritually and morally stagnant. The spiritual and moral values kept going down. The tribes in the society carried out trade, which brought profits and great wealth. The wealth was concentrated in the few which led them to neglect others. There were all sorts of Idol worship and superstitions in the society. This sort of spiritual degradation was common among the Meccan Arabs. Their customs and traditions became an obstacle to change. Examples of this included burying girl child alive, maltreatment of women and sexual immorality. During this time there were no teachings or writings that could guide the society. The society worshipped the ancestors. There was great religious vacuum in the society. The religion that was around the Arabs was Christianity which they were unwilling to accept because it was associated with Roman dictatorship, which they were against. They argued that accepting Christianity was like losing their independence. The gap between the rich and the poor began causing tensions among the Meccan society. This led to the rise of Qur’an teachings. The teachings responded to these tensions by stressing on knowledge, justice by redistributing wealth in the society and spiritual and moral uplift. This was to solve most of the problems in the Meccan Society. As it can be seen, Islam arose not only as a movement for change but also as a moral and spiritual force. Its insistence on knowledge, social justice, spiritual and moral justice makes the religion inherently progressive. Islam taken from its origin does not need advocating for progressiveness. It responded to moral spiritual and social needs of all. The Qur’an teachings are sympathetic to the weak in the society and gives equal rights to women as men in the society. The Qur’an gives out the rights of women in marriage and inheritance of property and states that women should be given equal dignity. For this religion to be progressive it must accept the gender equality. The progressive aspects of Islam were lost. The pre-Islamic traditions were not abandoned even after embracing Islam. The poor attitude towards women remained. The people even attempted to interpret the Qur’an together with their traditional believes. This led them to develop their own rules alongside the Qur’an. These laws were known as Sheri’ah. Some of these laws went against the teachings of Qur’an. Take for example allowing triple divorce which was a condemned ...Download file to see next pages Read More
Share:
Tags
Cite this document
(“Progressive Islam and Environmental Research Paper”, n.d.)
Progressive Islam and Environmental Research Paper. Retrieved from https://studentshare.org/religion-and-theology/1471876-progressive-islam-and-environmental

CHECK THESE SAMPLES OF Progressive Islam and Environmental

A commodity also provides a secondary service which is generally looked over. If the secondary service is not utilized then it means that the item has not been used to its fullest potential.
Such unwanted materials are known as waste. Zero waste America (www.zerowasteameraica.com, 2002) considers waste as a “resource that is not safely recycled back into the environment or the market place.”
The UK government recognizes the wastes by classifying them into two broad categories namely ‘controlled’ and ‘non-controlled’ wastes. Controlled wastes can be further divided into domestic wastes, wastes from industries, commercial and other wastes from hospitals etc. These can be further divided...
7 Pages (1750 words) Case Study

The ideologies of the Western bloc were pro-liberalism as they believed in having a free market or mixed economy and giving due rights to individuals. In contrast, the Eastern bloc fought in favor of a planned economy with everything under the authority of central power. One bloc treated global peace as a result of democracy while the other bloc presented views to suggest that democratic peace is an unattainable concept. These debates and issues became even more heated with the worsening global political situa...
12 Pages (3000 words) Term Paper

As far as religious practices are concerned, the role of women in Islam and the Wicca religion is very impor...
8 Pages (2000 words) Coursework

The Position of Women in Islam

Men and women want different things in life and are destined for different things in life. Thus, based on the long-term observation of men and women nature Islam offers a separate way of treating women restricting some of their rights and offering other benefits. Thus, it can also be probable that taking men and women equally is actually a violation of their rights. As the question remains controversial, more and more people include in the debate over it. However, having explored the topic I came to the conclusion that Islam supports women`s rights on a decent level.
Speaking about Islam it is necessary to take into account that this religion cannot be understood as wholesome. Islam is a very divergent religion, with a numbe...
6 Pages (1500 words) Term Paper
sponsored ads
Save Your Time for More Important Things
Let us write or edit the research paper on your topic "Progressive Islam and Environmental" with a personal 20% discount.
GRAB THE BEST PAPER

Let us find you another Research Paper on topic Progressive Islam and Environmental for FREE!