Comments (0)
Add to wishlist Delete from wishlist
Cite this document
Summary
Contents Introduction 2 Law in the Early Church 2 Paul’s Views on the Law 3 Pauls Views on Righteousness and Law 7 Paul’s Views on Law as a Condition to Salvation 7 Pauls Views on Law as a Gauge of Morality 8 The Role of the Law in Paul’s Gospel 8 Application of Pauline Epistles to Modern Christians 9 Conclusion 9 Bibliography 10 Paul’s View of the Law as in his Letters to the Galatians and the Romans Introduction Paul was an extremely important part of the early Church and provided it with strong traditions that persist to the modern day…
Download full paper File format: .doc, available for editing
HIDE THIS PAPERGRAB THE BEST PAPER97% of users find it useful 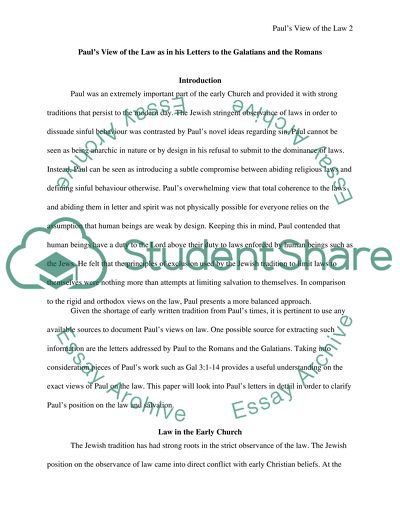 (Paul'S View of the Law As Seen Primarily in Galatians and Romans Essay)
https://studentshare.org/religion-and-theology/1451485-paul-s-view-of-the-law-as-seen-primarily-in.

“Paul'S View of the Law As Seen Primarily in Galatians and Romans Essay”, n.d. https://studentshare.org/religion-and-theology/1451485-paul-s-view-of-the-law-as-seen-primarily-in.
Comments (0)
Click to create a comment or rate a document

The emergence of post-modern society was in a way fueled by the failures of modernism. For example, the postmodern society views climate change and the occurrence of various ailments as a result of modernity. Industries led to environmental pollution and degradation of natural resources that supported life.

Noah (2003 p 47) observes that the post-modern society began in the 21st century whereby knowledge was applied for personal development rather than for enlightenment. For example, learners in the post-modern society are less focused on theories that give them knowledge regarding particular issues in nature, from which they can not derive monetary value for their existence. In this view, knowledge has been commoditize...
7 Pages (1750 words) Essay

New and complex issues have arisen which demanded fresh understanding and handling of cases involved them. This has resulted in the enhanced development of specialized laws e.g. cyber laws and interpretation of those laws. The same is true with Media Laws. Media has developed much in the last half-century. As it evolved as a profession and more people started to join it, there arose the levels of money involved in it. With this grew the contractual obligations on the parts of parties and concerned laws e.g. patent laws, privacy laws, and copyrights laws, etc. also started to play their parts. With these issues, the role of law in the media industry also reached a new height.
Mathew Fisher, the appellant, joined a band with Mr...
6 Pages (1500 words) Assignment
sponsored ads
Save Your Time for More Important Things
Let us write or edit the essay on your topic "Paul's View of the Law as seen primarily in Galatians and Romans" with a personal 20% discount.
GRAB THE BEST PAPER

Let us find you another Essay on topic Paul's View of the Law as seen primarily in Galatians and Romans for FREE!