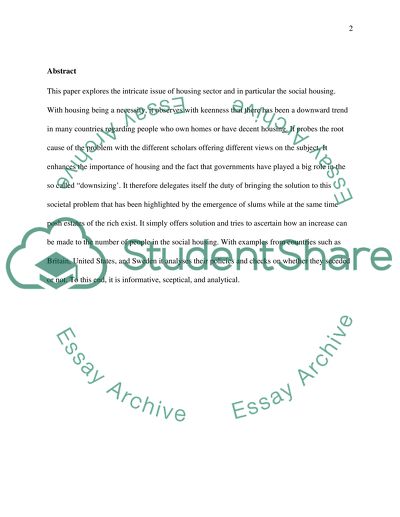 Download file to see previous pages With housing being a necessity, it observes with keenness that there has been a downward trend in many countries regarding people who own homes or have decent housing. It probes the root cause of the problem with the different scholars offering different views on the subject. It enhances the importance of housing and the fact that governments have played a big role in the so called “downsizing’. It therefore delegates itself the duty of bringing the solution to this societal problem that has been highlighted by the emergence of slums while at the same time posh estates of the rich exist. It simply offers solution and tries to ascertain how an increase can be made to the number of people in the social housing. With examples from countries such as Britain, United States, and Sweden it analyses their policies and checks on whether they seceded or not. To this end, it is informative, sceptical, and analytical. Aims of the strategy To understand whether there can be an increase in the number of people who attain the social housing with the understanding that there are forces that fight this move and have led to the decrease of the same. Background Study Housing is a basic necessity. This then means that home ownership serves the purpose of ensuring that fundamental obligations are fulfilled. This may include raising the quality of family life and education. To this end, housing plays a fundamental role in the economies of both developed and developing countries with the governments of respective countries acknowledging this as a mirror of development. Housing policy then has been regarded in two different views; there are those who view it in terms of continuity or change with the change protagonist accusing the regime of short termism due to their nature of treating the housing as a “political football” and being chameleons in their nature of changing colours and direction to reflect party political preferences (Balchin and Rhoden 2002). These changing political positions have made it impossible to have choices that are rational in the housing sector. This change perspective is argued by Harloe (1995) who notes that the case of British housing policy is ideal example where he links the change from the periods of 1919 to 1970s. He notes that this is as a result of both long term economic changes and shorter political tensions by stating that social housing widened from residual housing only in times of market disruptions and political upheavals. Barker (2003) supports this by contending that the role of housing policy was only to support modernization of the housing market while the social housing played a different role. To this end, the propagators of this view had their insights on the fact ...Download file to see next pages Read More
Share:
Tags
Cite this document
(“Increasing the Number of People Downsizing in Social Housing Essay”, n.d.)
Increasing the Number of People Downsizing in Social Housing Essay. Retrieved from https://studentshare.org/religion-and-theology/1444455-policy-development-and-evalvation

“Increasing the Number of People Downsizing in Social Housing Essay”, n.d. https://studentshare.org/religion-and-theology/1444455-policy-development-and-evalvation.
Comments (0)
Click to create a comment or rate a document

The second aim is to then consider the objections to th...
6 Pages (1500 words) Dissertation

... of social welfare as shown by the triangle marked abc. Social welfare in health care is bound to increase as producers tend to produce more as a result of the subsidy while consumers tend to consume more because some of the benefits of the subsidy are passed on to consumers by producers (Hazlitt, 1988, p.198). Health outcomes associated with the above action of the government can be measured in conformity with a number of positive effects. For instance a series of positive outcomes including a healthier nation, greater productivity, longevity and a bigger Gross Domestic Product could add to incremental values by increasing the relative effectiveness of intervention by the government. If the free market forces of demand and supply...
8 Pages (2000 words) Case Study

... of coordination and control, formalization, and centralization of power. Classical theorist such as Taylor, Fayor, and Weber are of the belief that there is a single best way for organisations to be structured. However, organisations vary considerably on structural attributes. Modern theorists are of the belief that there is not one single best way to organize. An important aspect is the fit between the organisation’s structure, size, technology and requirements of the environment. This is also known as the “contingency theory.” Size refers to the capacity, number of employees, outputs, and resources. Differentiation such as departments, job titles and levels increase with size, but at a decreasing rate. Increased size relates to increased...
10 Pages (2500 words) Coursework
sponsored ads
Save Your Time for More Important Things
Let us write or edit the essay on your topic "Increasing the Number of People Downsizing in Social Housing" with a personal 20% discount.
GRAB THE BEST PAPER

Let us find you another Essay on topic Increasing the Number of People Downsizing in Social Housing for FREE!