Comments (0)
Add to wishlist Delete from wishlist
Cite this document
Summary
Report on Religious Field Service: St. Athanasius Greek Orthodox Church [Name of Student] [Academic Level] Abstract Religion must promote unity and peaceful relationship among all since there is only one Creator and religion is our way of interaction with Him, thus forming a good and close relationship with Him…
Download full paper File format: .doc, available for editing
HIDE THIS PAPERGRAB THE BEST PAPER96.3% of users find it useful 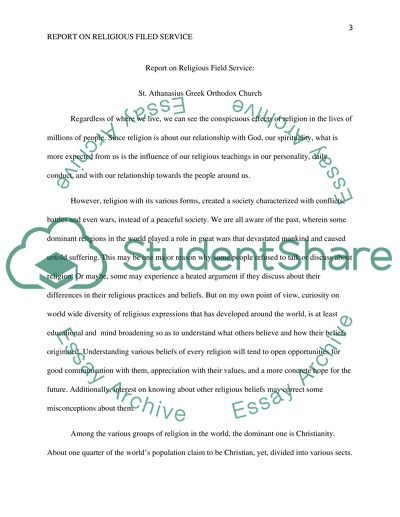 Download file to see previous pages By examining deeply and becoming aware of various religious practices of every religion may contribute to understanding and appreciation of each recognized beliefs and values. This is the purpose of this paper. This will also present a unique experience of attending personally one of the church’s services to actually see what is the strength of a certain religious group that holds each member tightly organized and unified in worship to God. Report on Religious Field Service: St. Athanasius Greek Orthodox Church Regardless of where we live, we can see the conspicuous effects of religion in the lives of millions of people. Since religion is about our relationship with God, our spirituality, what is more expected from us is the influence of our religious teachings in our personality, daily conduct, and with our relationship towards the people around us. However, religion with its various forms, created a society characterized with conflicts, battles and even wars, instead of a peaceful society. We are all aware of the past, wherein some dominant religions in the world played a role in great wars that devastated mankind and caused untold suffering. This may be one major reason why some people refused to talk or discuss about religion. Or maybe, some may experience a heated argument if they discuss about their differences in their religious practices and beliefs. ...
Additionally, interest on knowing about other religious beliefs may correct some misconceptions about them. Among the various groups of religion in the world, the dominant one is Christianity. About one quarter of the world’s population claim to be Christian, yet, divided into various sects. The prominent forms are Roman Catholic, the Orthodox Church, the Reformists or Protestants in its numerous sects such as Episcopalian, Lutheran, Calvinist, Baptist, Methodist and other churches. All of these churches consider themselves to be established respectable religion. I am interested to examine and know more about the St. Athanasius Greek Orthodox Church because on my opinion, as I have observed, its religious beliefs and practices are very similar with the Roman Catholic. So, why does this church has to separate itself and be recognized differently? So, I decided to attend one of its Sunday services to see the actual liturgical ceremony and practices. I believe this is one best way to correct any misconception about them. To my surprise, the church or cathedral itself is far different from the Roman Catholic Church. It is very colorful because instead of various relics and icons, the church is surrounded by hand-painted illustrations of various Jesus Christ’s image, his twelve apostles, angels and even images of Mary, all painted in the walls. All the paintings have relevant stories on the life of Jesus. According to one worshiper I asked, artworks in the wall contribute to a feeling of heavenly splendor while observing the liturgical ceremony, which is very solemn and serene. He also commented that the paintings in the walls constantly reminding him of the ...Download file to see next pages Read More
Share:
Tags
Cite this document
(“Report on Religious Field Research Essay Example | Topics and Well Written Essays - 1250 words”, n.d.)
Retrieved from https://studentshare.org/religion-and-theology/1444353-report-on-religious-field-research

... entirely different threats when he took over the helm from Reginald H. Jones in 1981. Back then, the main concerns were foreign competition and a bloated workforce which he had religiously trimmed down. The environment today is vastly different with globalization trends all over. The strategy at G.E. can be summed up in two words: technology and innovation. It is the two words that result in technical leadership which provides those high margins in the past and even today in some of the growth areas it had identified such as health care and renewable energy. G.E. had long left industries where there was price pressure and margins got thinner. By using technical leadership in industries it had chosen, it is possible to produce high-margin...
12 Pages (3000 words) Report

6 Pages (1500 words) Coursework
sponsored ads
Save Your Time for More Important Things
Let us write or edit the essay on your topic "Report on Religious Field Research" with a personal 20% discount.
GRAB THE BEST PAPER