Comments (0)
Add to wishlistDelete from wishlist
Cite this document
Summary
The study aimed at evaluating effectiveness of a family-based behavioral therapy on treating mothers who have been referred from child protective service for drug abuse and for neglecting their children. Existing literature on the research field shows that a significant number…
Download full paperFile format: .doc, available for editing
HIDE THIS PAPERGRAB THE BEST PAPER98.5% of users find it useful 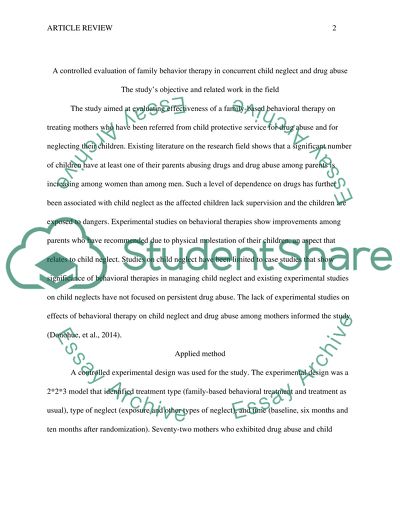 “A Controlled Evaluation of Family Behavior Therapy in Concurrent Child Essay”, n.d. https://studentshare.org/psychology/1691164-a-controlled-evaluation-of-family-behavior-therapy-in-concurrent-child-neglect-and-drug-abuse.
Comments (0)
Click to create a comment or rate a document

....” The definition of child abuse was gradually widened. Also, a new family policy was made the government, wherein neglectful parents were seen not as abusive but as requiring guidance. Instead of punitive measures, the social service for child abuse focused more on offering support to families so as to address child neglect. Apart from creating policies that centre on providing services for children especially needing protection, such as the “Every Child Matters” initiative, the government also worked towards improving the quality of such policies. The government developed systems of assessing the performance of such policies, ensuring that the goals were being achieved and public money was being put to good investment (Devaney...
13 Pages(3250 words)Essay

... Module Child Abuse and Neglect Children are vulnerable members of the society who must be protected from maltreatment and exploitation. This is usually done by parents, guardians, community and the government. However, the rights of children and especially adopted ones as well as those under foster care must be protected by the law, which should specify the minimum required treatment for children, and offer incentives for fair treatment of children by the community. This report discusses the enforceability, effectiveness and shortcomings of some child protection Acts and gives recommendations for possible improvement of these provisions. Adam Walsh Child Protection and Safety Act of 2006 P.L. (109-248) This law provides...
4 Pages(1000 words)Research Paper

...﻿Child Abuse and NeglectChild abuse is a global problem that is deeply rooted in cultural, economic and social practices. It is generally perceived that the children are abused by strangers but it is now known that children go through a considerable percentage of abuse by family members or people close to the child apart from friends, acquaintances and strangers. The Federal Child Abuse Prevention and Treatment Act (CAPTA) as amended by the CAPTA Reauthorization Act of 2010, defines child abuse as “Any recent act or failure to act on the part of a parent or caretaker which results in death, serious physical or emotional harm, sexual abuse exploitation” (Definition of Child Abuse and Neglect in Federal Law, n.d.). The child under...
2 Pages(500 words)Assignment

...﻿Child Abuse and Neglect Question One Was Letourneau’s original punishment sufficient? The original punishment placed on Mary Kay was not sufficient because it did not deter her from continuing her sexual relationship with a minor. She got a lesser sentence due to curt plea and pardon. However, she did not learn her lesson because a short time after leaving prison, she met again with Vili, whereby she got her second pregnancy for the teenager. Would the legal response have been different if Letourneau was a male teacher and Vili was a female student? The legal response would be very different if the teacher was male and the student a female, because the law deems men as superior sexual figures compared to women. As such, if a man...
4 Pages(1000 words)Assignment

On the other hand, sexual abuse is meted out at the child by an adult by force, coercion or emotional black mailing. Children are physically abused by hitting hard, cigarette burns, female genital mutilation and other non-accidental injuries. Last but not the least; a child is emotional abused by the parents and care-givers through their behavior, glance and facial expression.
Several studies reveal that among others, the art teacher is a person who can help an abused child to recover from the traumatic conditions. This help can be provided by paying special attention and helping abused children to express themselves in the various activities of arts.
Among above-mentioned common characteristics, many other personality and...
6 Pages(1500 words)Research Paper

Introduction Any non-accidental or intentional deeds from adults, caregivers and parents effecting emotional and physical harm to child in referred as child abuse. Neglect is emotional maltreatment towards children which can be physical in nature. This essay will deliver extended exposure and information about child abuse and neglect.
Discussion
Child abuse is defined as the physical, sensitive and sexual mistreatment of a child or children. There are different forms of child abuse. Neglect is one of the forms of child abuse. It is quite devastating and horrifying to reveal that everyday more than five children die due to extreme child abuse. Child abuse can occur at every cultural line and socioeconomic level (Clark 58). S...
1 Pages(250 words)Essay

Family Treatment of the al Affiliation With the abuse of drugs amongst teen on the rise, this research tries to propose a way in which the already addicted teens can be helped. It is on this background that I came up with the proposal to use Family treatment as a treatment measure for the teens. The Family treatment toward the adolescent in relation to drug and substances abuse has been proven to be an efficient method (Cui et al, 2012). The non-experimental research design falls under broad categories of strategies used in investigation in which the person tasked with the research work observes the natural occurrence of the phenomena and does not introduce any external variable. In this method, variables are not manipulated delib...
2 Pages(500 words)Essay

Types of Child Abuse and Neglect

... with these changes in behavior and development must be evaluated for the possibility of emotional abuse (McDonald 223). Certain children may not be suffering abuse, but they may be subjected to neglect which can hamper their physical and mental development and also curb their academic and professional achievement. Hence, it is very important to identify and counsel children who are neglected too. Signs of neglect include lack of consistent supervision, paleness, listlessness, constant hunger, poor hygiene, presence of lice, distended abdomen, poor social skills, regular fatigue, stealing of food and frequent absenteeism at school (National Research Council 208- 211). Until the 1970s child abuse was considered a family problem...
7 Pages(1750 words)Research Paper

Child Abuse and Neglect under 18

Recommendations were likewise given in the hope to improve the existing system further.
The key issues expressed herein generally navigates toward the root causes of the wrongdoings of parents who are either neglectful or abusive, since the line dividing these two issues are quite thin and abuse can be interrelated to neglect and vice versa. This study is user-friendly because aside from being an excellent source of information, common words are used and the facts are concise.
Child maltreatment includes all acts committed or are omitted by parents and primary caregivers which are considered threats and have harmful outcomes on the child. Such threats may either be intentional or not intentional, but resulted in either...
27 Pages(6750 words)Essay
sponsored ads
Save Your Time for More Important Things
Let us write or edit the essay on your topic "A controlled evaluation of family behavior therapy in concurrent child neglect and drug abuse" with a personal 20% discount.
GRAB THE BEST PAPER

Let us find you another Essay on topic A controlled evaluation of family behavior therapy in concurrent child neglect and drug abuse for FREE!