Comments (0)
Add to wishlistDelete from wishlist
Cite this document
Summary
Post-Traumatic Stress Disorder is defined its characteristic of provoking fear, helplessness or horror to witnesses of traumatic events in response to threat of injury or death. To be given the PTSD diagnosis someone must have been exposed to an intense stressor or traumatic…
Download full paperFile format: .doc, available for editing
HIDE THIS PAPERGRAB THE BEST PAPER92.8% of users find it useful 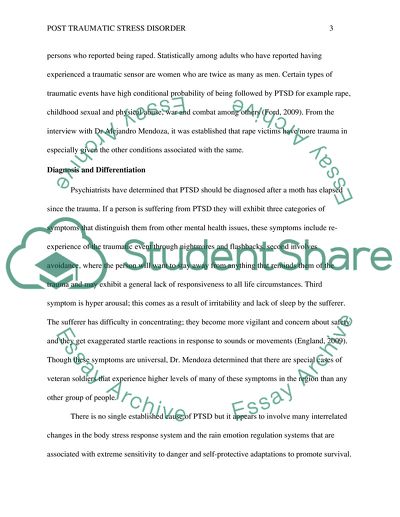 CHECK THESE SAMPLES OF PTSD

... of medication and therapy, both of which can help the patient learn to cope with the traumatic event and learn to lead a more positive life unhindered by fear and anxiety. Post-traumatic stress disorder Overview Post-traumatic stress disorder (PTSD) is an emotional disorder that is characterized by severe anxiety after an individual has experienced a psychologically traumatic event. After someone has been subjected to a horrific situation, regardless of whether they are personally affected or merely a bystander to an incident that befalls another, their brain reacts defensively. Each human brain is unique in the way that it defends itself, and the coping mechanisms likewise vary. While humans are different in their emotional responses...
6 Pages(1500 words)Research Paper

...There are three main groups of symptoms that can help diagnose the posttraumatic stress disorder correctly. Repeated traumas, emotional feedbacks and chronic physical attribute belong to them. Memory disorder or trauma nightmares belong to the repeated traumas. Sleep disturbance, attention focusing, irritability and anger belong to the chronic physical attributes. Glass and Jone (2005) state: "PTSD symptoms can follow any serious psychological trauma, such as exposure to combat, accidents, torture, disasters, criminal assault and exposure to atrocities or to the sequelae of such extraordinary events. Prisoners of war exposed to harsh treatment are particularly prone to develop PTSD. In their acute presentation these symptoms, which...
11 Pages(2750 words)Research Paper

...of soldiers who fought in Iraq had shown symptoms of mental problems. The study also showed that suicide in the military has doubled since 2001. There was even an investigation by the National Public Radio that soldiers with PTSD were punished and kicked out of the army (Weinstein). 4. Minor evidence When a person encounters a traumatic experience that might have harmed the individual physically and/or emotionally, the person is most likely to develop PTSD or post-traumatic stress disorder. Any harm or threat of harm that an individual encounters (it can be the person that was harmed, a loved one, or the person who witnessed a harmful event) can lead to PTSD. PTSD was...
11 Pages(2750 words)Essay

...s not done to care for the Afghanistan war veterans and many of them plunged into alcohol problems, crime and suicide upon their return. But fortunitely enough new treatment programs are emerging that assist the veterans who suffer from post-combat mental health problems such as depression and post traumatic stress disorder. Cognitive Behavioral Therapy (CBT), is becoming an imperative method for the treatment of the mental health issues among the military and veteran community, and is currently considered the standard of care for depression and PTSD by even the United States Department of Defense. CBT is a psychotherapeutic approach that aims to change the patterns of behavior or thinking that is responsible for patient’s negative...
5 Pages(1250 words)Essay

... received from this book explained the characteristics and symptoms of an anxiety disorder called PTSD, which will be the topic of the rest of this paper. 2 Definition of PTSDPTSD is an anxiety disorder that can happen when an individual has experienced extreme trauma. According to the American Psychiatric Association (1994) states that PTSD is the result of an extreme trauma where a person “experienced, witnessed, or was confronted with an event or events that involved actual or threatened death or serious injury, or a threat to the physical integrity of self or others” (p. 427). In addition, the individual’s response “involved intense fear, helplessness, or horror” (p. 428). Many soldiers in the Iraq and Afghanistan wars came back...
6 Pages(1500 words)Essay

... Task Stress and Burnout Management Summary In summarizing the article, burnout is viewed as an outcome of unrelenting stress, while stress involves pressure demanded from one’s body and brain. To prevent burnout, the articles highlight the following burnout prevention tips: the ability to control stress, setting boundaries to everything one is doing, adopting fit lifestyles, creating time for leisure and accepting what one can not change as ways of running stress. Reaction 1. Burnout In my opinion, an individual might be suffering from burnout if he/she has constant stress that causes emptiness. Burnout is a condition of psychological, touching, and physical fatigue normally caused by increased stress. According to my life... Task Stress...
1 Pages(250 words)Essay

...is that this is where the majority of the disorder within the current society is evidenced. With regards to the etiological theory that best defines and describes PTSD and why it exists, it is the understanding of this student that this approach is necessarily that of the “conditioning” theory (Meltzer et al, 2012). Although the conditioning theory is incomplete with respect to differentiating PTSD from a range of other anxiety related disorders, it does however uniquely define the means by which the disorder is evidenced within the life of the individual who suffers from it and helps the researcher to understand what needs based approaches can be engaged to create a positive impact upon their life as...
2 Pages(500 words)Essay

...the professionals, who are engaged in assisting the victims, the witnesses, friends and families of the victims. This paper seeks to discuss the aftermath of Post-Traumatic Stress Disorder. Post-Traumatic Stress Disorder (PTSD) refers to an anxiety disorder that arises when one experiences an extensively stressful experience. Occurring either after some months or years after the stressful event, PTSD creates a frightening situation and it appears as if the experience would easily not leave the victim (Lommen and Restifo, 2009). Immediately after an individual experiences the stressful event, he or she suffers from traumatic stress. As the persons continue with their daily chores, they may notice that the...
8 Pages(2000 words)Research Paper

...that their normal status cannot be restored. Situational events that may trigger PTSD Post-Traumatic Stress Disorder usually occurs with battle scared military officers who go through a win or die battle. Many soldiers suffer from the disorder situations when they are fighting a losing battle. Traumatizing incidences such as bombast makes them scared. The soldiers get maimed while some die. The incidences and aftermath of the war have been the leading cause of the mental disorder. The disease is also prevalent in emergency care workers. Most of the emergency care workers who suffer the disorder are those who take care of the victims whose life is in danger. The death of the victims leaves shocking memories that they...
4 Pages(1000 words)Research Paper
sponsored ads
Save Your Time for More Important Things
Let us write or edit the essay on your topic "PTSD" with a personal 20% discount.
GRAB THE BEST PAPER

Let us find you another Essay on topic PTSD for FREE!