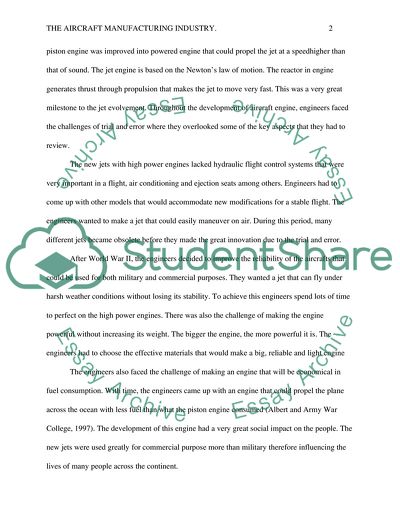 Extract of sample "Post-War Evolution of The Aircraft Manufacturing Industry"

﻿
The Aircraft Manufacturing Industry.
Following the World War II, the Aircraft manufacturing industry underwent significant involvement in commercial and military aircraft. The engine developed from piston to high performance jet aircraft. The piston engine was very heavy, consumed a lot of fuel and had high maintenance requirements. The invention of high power engine opened up many opportunities to the jet developers as well as the engineers (Ebert and Army War College, 1997). However, this came with some challenges.
After the World War II, there was an urgent need of high power engines that could propel jets at a very high speed. The speed was required in both the military and commercial jets. The piston engine was improved into powered engine that could propel the jet at a speedhigher than that of sound. The jet engine is based on the Newton’s law of motion. The reactor in engine generates thrust through propulsion that makes the jet to move very fast. This was a very great milestone to the jet evolvement. Throughout the development of aircraft engine, engineers faced the challenges of trial and error where they overlooked some of the key aspects that they had to review.
The new jets with high power engines lacked hydraulic flight control systems that were very important in a flight, air conditioning and ejection seats among others. Engineers had to come up with other models that would accommodate new modifications for a stable flight. The engineers wanted to make a jet that could easily maneuver on air. During this period, many different jets became obsolete before they made the great innovation due to the trial and error.
After World War II, the engineers decided to improve the reliability of the aircrafts that could be used for both military and commercial purposes. They wanted a jet that can fly under harsh weather conditions without losing its stability. To achieve this engineers spend lots of time to perfect on the high power engines. There was also the challenge of making the engine powerful without increasing its weight. The bigger the engine, the more powerful it is. The engineers had to choose the effective materials that would make a big, reliable and light engine
The engineers also faced the challenge of making an engine that will be economical in fuel consumption. With time, the engineers came up with an engine that could propel the plane across the ocean with less fuel than what the piston engine consumed (Albert and Army War College, 1997). The development of this engine had a very great social impact on the people. The new jets were used greatly for commercial purpose more than military therefore influencing the lives of many people across the continent.
Although the evolvement of high power engines was a great breakthrough in the development of the jet engine, many engineers thought it was easy to develop the engines. However, the industry proved hard with time. The making of highly powerful and efficient engines required high expertise to make the engine perfect. They did not take enough time to understand the technology behind the new engine.
The emergent of the power jet engine led to manufacturing of the jets with high capacity for passengers for commercial purposes. Military jets were also developed with high capacity to carry enough armory for warfare. The invention of high power engine influenced the current jet manufacturing technology. Most of the planes currently are made using the technology of high power engine discovered after the piston engine technology.
References
Top of Form
Bottom of Form
Ebert, D. E., & Army War College (U.S.). (1997). The evolution of revolution: Application of information technology in military logistics. Carlisle Barracks, Pa: U.S. Army War College. Read More
Share:
Tags
Cite this document
(“Post-War Evolution of The Aircraft Manufacturing Industry Case Study - 1”, n.d.)
Post-War Evolution of The Aircraft Manufacturing Industry Case Study - 1. Retrieved from https://studentshare.org/professional/1875620-evaluate-the-challenges-and-opportunities-in-the-aircraft-manufacturing-industry-following-world-war-ii-as-commercial-and-military-aircraft-evolved-from-piston-engine-to-high-performance-jet-aircraft

...?Insert Question What particular social and political issues do the Japanese focus on in regard to Allied Occupation The reforms initiated by the Allied Occupation of Japan immediately after the World War II brought about a constitutional egalitarian system to the country, as illustrated in various post-war literature. The literature is indicative of the manner in which anti-occupation campaigners in Japan had effectively been pressured to unconditionally throw in the towel to end the conflict, and most of the highly significant Japanese political icons that held leadership positions by the end of the World War II still expressed panic about the likelihood of trial and sentence for their contribution in the conflict, so they gave...
3 Pages(750 words)Assignment

Economics of Industry - Market structure in the aircraft manufacturing industry

...?Introduction The market structure of commercial passenger aircraft is oligopolistic, primarily dominated by Boeing and Airbus. Boeing has a 70 year heritage and has been a leader in the industry for a long time. However, since the advent of Airbus, a European consortium, Boeing has faced tough competition and the market has developed and grown due to the presence of now two strong companies. Firm Growth Boeing Over the years, Boeing has taken advantage of its history and early entry into the market (since 1958) to become leaders in manufacturing commercial aircrafts. In 1958, Boeing introduced 707, the United States' first commercial jet airliner. (Boeing, 2011) Boeing, then expanded by acquiring Vertol Aircraft Corporation in 1960...
6 Pages(1500 words)Research Paper

...? of the Candi XXXXXXX of the Project Report: Post Traumatic Stress Disorder in Commercial Aircraft Pilots: A Study of Different Methods of Management and Intervention This report is submitted as part of the requirement for the award of the MSc in Air Transport/Safety/Aircraft Maintenance Management All the materials taken from various academic sources have been referenced and the sources have been properly acknowledged Month and Year of Submission: January, 2014 Word Count: 00000 Name of the Supervisor XXXX Notes of any Restrictions on Circulation Executive Summary: Modern aviation industry, because of its competitive nature, places a lot of stress on the pilots who remain at the forefront of the aircraft. Pilots, like other humans, also...
51 Pages(12750 words)Dissertation

...A380 COMPARED TO THE BOEING DREAMLINER INTRODUCTION The United s aircraft industry continues to be a critical element of economics, politicaland military base, second to none in export in dollars and frills a place that cannot be substituted by any other industry. The US industry was once dominant in the global market, but Europe has now reached a level of parity in transport sales and is closing the gap in military and rotorcraft sales. (Mintel, Aerospace Industry Report, August 2001). The only two competitors in the large commercial aircraft market is Europe's AIC (Airbus Integrated Company) and the US Boeing Co. Airbus Airbus can be defined as a trademark for a large passenger jet aircraft manufactured by aerospace companies...
12 Pages(3000 words)Essay

This tells just how competitive an industry really is. A market structure defines the condition of a prevailing market and identifies how it is made up in terms of
Perfect Competition: Large number of firms, with homogenous products, characterizes this and therefore there is no specific preference by the consumer for the product. The barriers of entry are low and so competitors exit in and out of the market. Since there is myriad options for the customers, prices are set by customer demand. Consumers and suppliers have a complete knowledge of the market.
In an ideal scenario, a perfectly competitive market on one extreme balances a monopoly on the other. In reality, no such thing as a true perfectly competitive market ex...
11 Pages(2750 words)Essay

...﻿ Running Head: Footwear OUTLINE I. Introduction The introduction part presents the main issue that this term paper wishes to address. It also lists down the theoretical framework that the writer wishes to use, and the methodologies for research, It also discusses the current developments in Local Footwear Manufacturing Industry and the brands that are dominating the market. II. Objectives This section enumerates the goals that the term paper wishes to achieve. III. Review of Literature This part cites researches pertaining to the footwear industry, including market figures and brief profiles of footwear manufacturers and even distributors. IV. Discussion This section discusses the aspects of manufacturing, from product...
1 Pages(250 words)Outline

...INDUSTRY ANALYSIS: This chapter evaluates the performance of chemical and the trends of the global chemical market as well as the three main markets, which are Asia-Pacific, European and American market. This chapter analyzes and identifies the environment and the position of this sector by using the five forces framework as well as industry life cycle. 1) Chemical Manufacturing Industry Performance: 1.1) Market value: The global chemical manufacturing produces many types of chemical products including basic chemicals, pharmaceutical products, specialty and fine chemicals, agrochemicals and fertilizer. These products are demanded in North and South America, Western and Eastern European, Asia-Pacific and MEA. Year $ Million...
14 Pages(3500 words)Essay

...Manufacturing Industry Evaluation Economists sometimes make use of concentration ratios to determine whether industries are oligopolies. The following paper examines recent data available on oligopolies according to concentration ratios in the Manufacturing industry according to a census carried out by the U.S. Census Bureau. According to this Census, concentration ratios for the fluid milk (311511), womens and girl’s cut & sew dresses (315233), envelopes (322232), and electronic computers (334111) are 315, 525, 166 and 465 respectively. These are further translated as 42.6 percent, 21.6 percent, 51.1 percent and 75.5 percent for the fluid milk industry, women’s and girl’s cut and sew dresses and the envelopes industries...
2 Pages(500 words)Research Paper

...﻿The case study of Airbus strategic analysis is focusing on the impact of current global financial crisis on the growth and development of commercial aircraft manufacturing industry. Commercial aircraft industry is a capital intensive industry in which manufacturers require huge amount of financial resources. The economic crisis existing in the global economy is not ensuring adequate sources of financial resources. In these conditions it will be interesting to identify the impact of economic crisis on the growth and profitability of the capital intensive industry of aircrafts. The aircraft industry is characterised by intense government support and control by way of subsidies and grant and regulations. As a global industry...
17 Pages(4250 words)Research Paper

Airbus and Its Activities in the Civil Aircraft Manufacturing Industry

...Table of contents Sl. no Topic Page no Executive summary 2 2 Introduction 2 3 Main body Critical success factors Airbus and its strategies in the last five years Key resources and capabilities that are used by Airbus Evaluation of the strategies of Airbus 3 – 8 4 Conclusion 8 Airbus and its activities in the civil aircraft manufacturing industry Executive summary This strategic management essay will give an insight about Airbus and its activities in Civil Aircraft manufacturing industry. The first part of the essay will give brief information about aircraft manufacturing industry and the key players. By conducting a Porter’s generic strategy analysis, the critical success factors of the industry are identified. The extent...
8 Pages(2000 words)Case Study
sponsored ads
Save Your Time for More Important Things
Let us write or edit the case study on your topic "Post-War Evolution of The Aircraft Manufacturing Industry" with a personal 20% discount.
GRAB THE BEST PAPER

Let us find you another Case Study on topic Post-War Evolution of The Aircraft Manufacturing Industry for FREE!