Comments (0)
Add to wishlistDelete from wishlist
Cite this document
Summary
The most obvious is the nature of information. MySpace has news items forming part of its homepage. Twitter has a picture of what appears to be a social function while Facebook has information of services offered besides…
Download full paperFile format: .doc, available for editing
HIDE THIS PAPERGRAB THE BEST PAPER98.1% of users find it useful 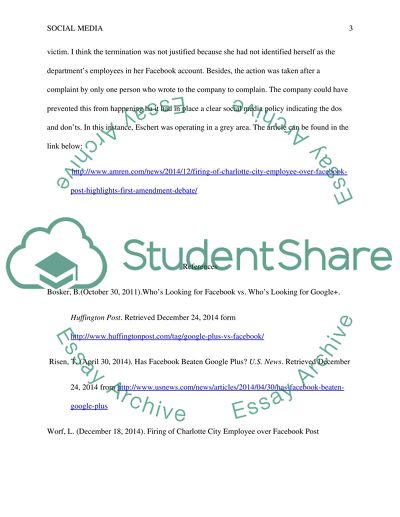 Social Media Question The homepages of the four sites bear striking differences. The most obvious is the nature of information. MySpace has news items forming part of its homepage. Twitter has a picture of what appears to be a social function while Facebook has information of services offered besides the prominent signup tab. LinkedIn on the other hand has mug shots of different faces from across the world and the signup tab. I am a member of Facebook because most of my friends are also members and it therefore acts as a quick source of information.
Question 2
Google plus compares to Facebook mainly in the sense that both are social networking sites. I haven’t tried using Google plus principally because most of my friends have also not made the shift to that sites. Google plus has slim chances if any in competing with Facebook due to a number of reasons. The key reason is that its orientation is not aimed at social networking customers but business sector customers (Risen, 2014, Bosker, 2011). In terms of numbers, this means that fewer visits are made to the site compared to Facebook translating to lower revenues.
Question 3
Charlotte Fire Department fired Crystal Eschert over comments she made on her Facebook page which were deemed to be against the company’s policy of treating all people with dignity and respect. In According to Worf (2014), Chrystal Eschert was incensed by reports that the handling of Michael Brown killing was in fact making the white police officer the victim. I think the termination was not justified because she had not identified herself as the department’s employees in her Facebook account. Besides, the action was taken after a complaint by only one person who wrote to the company to complain. The company could have prevented this from happening ha it had in place a clear social media policy indicating the dos and don’ts. In this instance, Eschert was operating in a grey area. The article can be found in the link below:
http://www.amren.com/news/2014/12/firing-of-charlotte-city-employee-over-facebook-post-highlights-first-amendment-debate/
References
Bosker, B.(October 30, 2011).Who’s Looking for Facebook vs. Who’s Looking for Google+.
Huffington Post. Retrieved December 24, 2014 form http://www.huffingtonpost.com/tag/google-plus-vs-facebook/
Risen, T. (April 30, 2014). Has Facebook Beaten Google Plus? U.S. News. Retrieved December
24, 2014 from http://www.usnews.com/news/articles/2014/04/30/has-facebook-beaten-google-plus
Worf, L. (December 18, 2014). Firing of Charlotte City Employee over Facebook Post
Highlights First Amendment Debate. American Renaissance. Retrieved December 24, 2014 from http://www.amren.com/news/2014/12/firing-of-charlotte-city-employee-over-facebook-post-highlights-first-amendment-debate/ Read More
Share:
Tags
Cite this document
(“Social Media and Web 2.0 Assignment Example | Topics and Well Written Essays - 250 words”, n.d.)
Retrieved from https://studentshare.org/professional/1672856-social-media-and-web-20

CHECK THESE SAMPLES OF Social Media and Web 2.0

... qualitatively analyzed and coded into 46 items. These items were then completed by 241 face book users in phase 2 of the study. As a results of factor analysis in light of this data, seven distinct uses and gratifications that face book users draw from it were identified. These include: social connection, shared identities, content, social investigation, social network surfing and status updating (Joison, 2008). The study revealed that the patterns of face book usage, site visits, user demographics and privacy settings preferences vary, and are associated with different gratifications and uses (Joison, 2008). A comparative study on gratifications derived from social media usage was conducted by Hasse and Young (2010). This study compared...
11 Pages(2750 words)Research Paper

Besides pros there are several cons of maintaining these connections as well. This is a very grave issue as these side effects are negatively shaping the human society and leading it into a dangerous future. The current report mentions what negative effects these advancements are having on the individuals of the society and thus on the society as a whole. Some future trends of the so called social web are also highlighted along with addressing some measures that should be looked up by governing authorities. This is essential for a safer and prosperous future. INTRODUCTION Social Web is the new terminology with which the visual social connections of each digital device are connected to each other via the internet. The platforms tha...
9 Pages(2250 words)Research Paper

... telephone, mass media, travelling facilities and many more. ICT has very strong and direct impacts upon the human development and society. It not only serves the society as a whole but also tends to improve and develop the individual position of the people. There are several aspects of human and social lives that are facing the ICT effects. ICT developments are reshaping the cultural values of societies. ICT do lot of beneficial functions for the mental growth of humans. It facilitates the people to communicate in better ways, develop good understandings about different things and have deep knowledge and instant information about the events occurring in any part of the world (Kraut, 2006). The social networking sites over the last decade...
6 Pages(1500 words)Essay

The Fake Democratic Impact of the Social Media Web Sites

...﻿Introduction Website is the information delivered over the Web that combines characteristics of both Web media and Web application. Websites may be deployed instantly worldwide without any delay. They grow very fast compared to the traditional information sharing medias that makes them indispensible part of today’s business and industry (Philips 2004). High-performance websites are used widely for promoting and expanding businesses and a number of services. This is basically an information technology project to develop website for a tourism operator. The aim is to develop an interactive website allowing customers to see real time weather, wind surf and other relating data to their travel destination. The tourism service provider also aims...
21 Pages(5250 words)Assignment

...Social Web: An Overview This paper explores the definition of social web and its different uses. It discusses the importanceof social web to people’s everyday lives, as a different media and its impact in this modern world. Social Web: An Overview Social interaction plays an important part in people’s well being. It defines our character, perspective in life and as a person as a whole. In today’s modern world, social interaction is made easy by using social web. Social web or social media according to Mayfield (2008) consists of six kinds; social networks such as Facebook, Twitter, Multiply and Friendster that allows people to build personal web pages that connect with friends to be able to share the content and communication within...
1 Pages(250 words)Research Proposal

Furthermore, they offer a richness of communication that was possible through desktop applications (Lewis, 2010; Wamelen & Kool, 2008).
According to OReilly (2005), the Web 2.0 systems are developed by modern programmers by means of development of structures like that Ruby On Rails (this was developed for the programming language Ruby) as well as Django (intended for the programming language Python). In addition, the programming for web 2.0 also comprises the families of technologies similar to AJAX. For web 2.0, the technology developers support dynamic languages as they facilitate fast debugging, development as well as the deployment of the new web. On the other hand, the compiling of static languages needs additional t...
6 Pages(1500 words)Literature review
sponsored ads
Save Your Time for More Important Things
Let us write or edit the assignment on your topic "Social Media and Web 2.0" with a personal 20% discount.
GRAB THE BEST PAPER

Let us find you another Assignment on topic Social Media and Web 2.0 for FREE!