Comments (0)
Add to wishlistDelete from wishlist
Cite this document
Summary
It was passed following the recognition that the security of US waterways is crucial for national security. A simple disruption of any port of the US could have dire…
Download full paperFile format: .doc, available for editing
HIDE THIS PAPERGRAB THE BEST PAPER97.3% of users find it useful 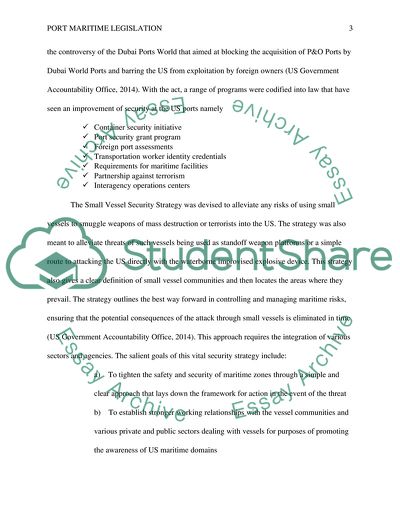 Port Maritime Legislation of Port Maritime Legislation The SMART Port Security Act enhances security programs within the Department of Homeland Security (DHS). It was passed following the recognition that the security of US waterways is crucial for national security. A simple disruption of any port of the US could have dire consequences on the nation’s supply chain hence damaging the economy (Richardson, 2012). At the core of the legislation are risk-based security measures that emphasize collaboration between the Coast Guard and the Customs and Border Protection. To achieve this objective, the Act:
a) Allows the DHS to recognize Trusted Shipper Programs of other countries
b) Allows the Coast Guard to recognize the security threat assessments of other governments or organizations
c) Requires the DHS to enhance interagency cooperation through constant updates of the US Maritime Operations Coordination Plan
d) Overhauls the Transportation Worker Identification Credentials program to curb unauthorized use and improve enrollee efficiency
e) Requires the CPB to adopt risk-based standard practices during the deployment of assets
The Security and Accountability For Every Port (SAFE) Act, 2006 is an Act of Congress. The main objective of the legislation is to tighten the security at ports in the US. A gambling provision was added to the legislation at the final moments before enactment. The provisions in this Act spring from some 20 bills that were introduced to the Congress following the controversy of the Dubai Ports World that aimed at blocking the acquisition of P&O Ports by Dubai World Ports and barring the US from exploitation by foreign owners (US Government Accountability Office, 2014). With the act, a range of programs were codified into law that have seen an improvement of security at the US ports namely
Container security initiative
Port security grant program
Foreign port assessments
Transportation worker identity credentials
Requirements for maritime facilities
Partnership against terrorism
Interagency operations centers
The Small Vessel Security Strategy was devised to alleviate any risks of using small vessels to smuggle weapons of mass destruction or terrorists into the US. The strategy was also meant to alleviate threats of such vessels being used as standoff weapon platforms or a simple route to attacking the US directly with the waterborne improvised explosive device. This strategy also gives a clear definition of small vessel communities and then locates the areas where they prevail. The strategy outlines the best way forward in controlling and managing maritime risks, ensuring that the potential consequences of the attack through small vessels is eliminated in time (US Government Accountability Office, 2014). This approach requires the integration of various sectors and agencies. The salient goals of this vital security strategy include:
a) To tighten the safety and security of maritime zones through a simple and clear approach that lays down the framework for action in the event of the threat
b) To establish stronger working relationships with the vessel communities and various private and public sectors dealing with vessels for purposes of promoting the awareness of US maritime domains
c) To acquire state-of-the-art technology that facilitates for detecting suspect vessels that pose security threats and getting rid of them through security measures and penalties
d) To foster cooperation among all sectors, including local, tribal, state, federal, international, public and private sectors to adopt one approach towards maritime safety and security. In doing so, the Department of State alongside other federal agencies will be involved.
References
Richardson, W. (2012). House Passes SMART Port Security Act, among others. Retrieved 18
November 2014 from http://www.securitydirectornews.com/public-sector/house-passes-smart-port-security-act-among-others
U.S. Government Accountability Office (2014). Maritime Security: The SAFE Port Act and
Efforts to Secure our Nation’s Seaports. Retrieved 18 November 2014 from http://www.gao.gov/products/GAO-08-86T
U.S. Government Accountability Office. (2014). Maritime Security: DHS could Benefit 18
November 2014 from Tracking Progress in Implementing the Small Vessel Security Strategy. Retrieved from http://www.gao.gov/products/GAO-14-32 Read More
Share:
Tags
Cite this document
(“Port Maritime Legislation Assignment Example | Topics and Well Written Essays - 500 words”, n.d.)
Port Maritime Legislation Assignment Example | Topics and Well Written Essays - 500 words. Retrieved from https://studentshare.org/professional/1666726-port-maritime-legislation

...?Maritime Operations 512952) Introduction Operations at sea are a risky business which involve proper adherence to safety manuals to avoid risk to life at sea. It has been recognized by the shipping fraternity that no cargo is more valuable than precious human life and proper training procedures must be inculcated among shipping personnel to avoid risks at sea that could endanger human life. It is with these guidelines that the International Safety Management (ISM) Code was developed for the Safe Operation of ships along with measures to prevent pollution at sea. (The ISM Code, 2007) The objectives of the code included (i) Prevention of accidents that could endanger human life, destruction of the marine environment in the event...
7 Pages(1750 words)Essay

These include increased competition among ports, changes in transport technology and ports, and internal competition for global markets. Over the recent years, lending agencies and governments have come to agree on the view that the participation of the private sector can be a powerful tool for improving the performance of port assets. Many government officials and port managers believe that privatization is the only way in which the performance of public port organizations can be improved. This view emerges from the believe that some specific characteristics of the private sector are very critical in the achievement of the desired commercial success in ports. Currently, many ports have undergone reformations with an aim of reduc...
8 Pages(2000 words)Essay

... perspective, such that by referring to the conventions maritime claims to disputes related to ownership of ship, contracts of ship sales, or claims regarding mortgages among others, could result in ship or vessels financing and ownership after purchasing them as second hand machineries.14 Through the legal framework, it is therefore easy to regulate the ports and shipping activities against illegal activities and encourage fair practices for involved shareholders, which encourage trade and economic growth. Bibliography ‘An Arresting Development’, http://www.maritimeadvocate.com/ship_arrest/an_arresting_development.htm, (23 February 2013) Abou-Nigm, V. R., The Arrest of Ships in Private International Law, New York, Oxford University press...
7 Pages(1750 words)Essay

...?Legislation: Women Issues Viebeck s that America is one of the few countries where women have almost equal rights as men (6). Like most women around the world, American women have had to overcome many challenges to attain the level of equality they have today. The 18th and the 19th century American women faced all manners of oppression. They were expected to stay at home to nurture children and take care of homes. As such, they were not expected to be heard, but to be seen. This implied that men dominated over them in all matters in society. Most women around the world still face this form of oppression. However, American women have managed to overcome some of the challenges. This has been made possible through intense activism...
7 Pages(1750 words)Essay

...LEGISLATION Legislation What is Affirmative Action? Affirmative Action refers to a federal agenda that was first used by Lyndon Johnson in his 1960 Executive Order 11246 that called on the federal government to take steps that would counteract historic discrimination of minorities with regards to their color, race, national origin and creed (Fullinwider, 2009). It also includes the protection of the rights of the underrepresented groups such as women. It aims at fostering diversity and compensating for the ways in which such underrepresented groups have historically been excluded through programs that prioritize their inclusion in the education, government and employment sectors. In the event that such programs become preferential based...
2 Pages(500 words)Essay

... a resolution for security and the facilitation of the supply chain at the international level. In the recommended framework, importers and shipping companies had to abide by the requirements of prior reporting through electronic means of cargo and shipping information as way of mitigating any possible security threats 9. New laws on port and maritime security One of the key legislations passed by the US Congress was on the creation of a new and better Department of Homeland Security that was to include other security agencies as part of their operation partners in fighting possible terror. As per this law, federal agencies, ship and port owners had to take up responsibility in effecting various security upgrades for maritime systems. Some...
10 Pages(2500 words)Research Paper

...Port Maritime Legislation The smart Port Security Legislation is a law that has its focus on enhancing measures for securing the maritime activities through mitigation of threats in the maritime sector before the risks can get to the shores of the United States. This act adopts a risk-based methodology that enables cooperation between the Homeland Security Department, local and state law enforcement agencies in enhancing the security of the maritime sector. This law also ensures cost cutting with the enhanced levels of cooperation between the local stakeholders, international, state and federal agencies in the mitigation of threats and enhancement of security in the maritime sector. Majorly the Smart Port Security Legislation has in place...
1 Pages(250 words)Assignment

According to Stopford, (1997, page 29) he defines a port as a geographical area where ships are brought alongside land to load and discharge cargo. In the UK, the management of the biggest port services occurs in the Humber region controlled by Associated British Ports (ABP), operating more than 21 ports. This implies that the services at the ABP have a direct influence on almost the entire country’s port system. There are several factors that influence port development, one of them being the geographic location of the port. An advantage is rendered to those ports that are located near maritime access routes and networks for easy access to international sea waters. At the same time, the connectivity with the inland infras...

10 Pages(2500 words)Term Paper
sponsored ads
Save Your Time for More Important Things
Let us write or edit the assignment on your topic "Port Maritime Legislation" with a personal 20% discount.
GRAB THE BEST PAPER

Let us find you another Assignment on topic Port Maritime Legislation for FREE!