Comments (0)
Add to wishlist Delete from wishlist
Cite this document
Summary
The study of welfare states and their classification within the last twenty years has been dominated by Gsta Esping-Andersen whose work, "The Three Worlds of Welfare Capitalism," influenced much of the welfare policies in the economically powerful Europe…
Download full paper File format: .doc, available for editing
HIDE THIS PAPERGRAB THE BEST PAPER94% of users find it useful 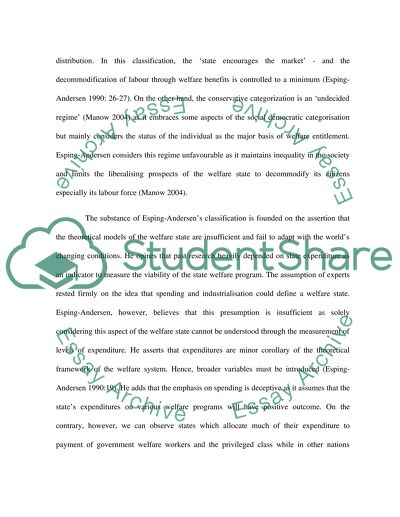 Extract of sample "Welfare States And Their Classification"

Download file to see previous pages However, not only has the popularity of Esping-Andersen's work been under attack, other experts in this area of study have also closely scrutinized the viability of Andersen's controversial categorization which has provoked criticisms from different sectors of society including economists and feminists. This paper will carefully examine Esping-Andersen's welfare state models and the criticisms afforded to them and evaluate the feasibility of these classifications especially the social democratic model towards which Esping-Andersen has revealed his proclivity.

In his book, "Three Worlds of Capitalism," Esping-Andersen put forth the foundational dimensions of capitalist welfare states as viable 'systems of stratification' (1990: 69-77) which comprise of three dimensions: Social democratic, liberal and conservative. The social democratic model measures universality of public welfare entitlements, frees citizens from their reliance on the market and 'decommodifies' labour. Esping-Andersen refers to the term 'decommodification' as the extraction of an individual from dependency on the market. This is founded on his contention that "social rights push back the frontiers of capitalist power" (Esping-Andersen 1990: 16). The liberal model of welfare states, the second model, allows the market to be the prime mover of income distribution. In this classification, the 'state encourages the market' - and the decommodification of labour through welfare benefits is controlled to a minimum (Esping-Andersen 1990: 26-27). On the other hand, the conservative categorization is an 'undecided regime' (Manow 2004) as it embraces some aspects of the social democratic categorisation but mainly considers the status of the individual as the major basis of welfare entitlement. Esping-Andersen considers this regime unfavourable as it maintains inequality in the society and limits the liberalising prospects of the welfare state to decommodify its citizens especially its labour force (Manow 2004).
The substance of Esping-Andersen's classification is founded on the assertion that the theoretical models of the welfare state are insufficient and fail to adapt with the world's changing conditions. He opines that past research heavily depended on state expenditure as an indicator to measure the viability of the state welfare program. The assumption of experts rested firmly on the idea that spending and industrialisation could define a welfare state. Esping-Andersen, however, believes that this presumption is insufficient as solely considering this aspect of the welfare state cannot be understood through the measurement of levels of expenditure. He asserts that expenditures are minor corollary of the theoretical framework of the welfare system. Hence, broader variables must be introduced (Esping-Andersen 1990:19). He adds that the emphasis on spending is deceptive as it assumes that the state's expenditures on various welfare programs will have positive outcome. On the contrary, however, we can observe states which allocate much of their expenditure to payment of government welfare workers and the privileged class while in other nations budget on welfare programs is allotted to social support. Not many policymakers would deem this as acceptable welfare state policy (Esping-Andersen: 1990:19-20). On the contrary, Esping-Andersen contends that social rights, stratification and state-market connection are the characteristics that welfare states should be founded upon. He asserts that social rights hold the most dynamic potential for the decommodifica ...Download file to see next pages Read More
Share:
Tags
Cite this document
(“Welfare States And Their Classification Book Report/Review”, n.d.)
Welfare States And Their Classification Book Report/Review. Retrieved from https://studentshare.org/politics/1510010-welfare-states

“Welfare States And Their Classification Book Report/Review”, n.d. https://studentshare.org/politics/1510010-welfare-states.
Comments (0)
Click to create a comment or rate a document

CHECK THESE SAMPLES OF Welfare States And Their Classification

Within the state, there are many ‘political’ and ‘social’ forces that try to impose their...
10 Pages (2500 words) Report

The period of Napoleon, that is 1801-1805, is marked as the formation of the Grande Armee1 and the allied armies of European empires demonstrating warmongering tendencies. It wa5snt just France and Napoleon but also Great Britain, Russia, Austria, and Prussia that were belligerent empires, as is obvious from the outcomes of the Congress of Vienna in 1814-18152. The new geopolitics and resolutions thus resulted in continued till 1848 when revolutions across the continent ended the Vienna arrangement. The...
7 Pages (1750 words) Term Paper

Therefore borders can be termed as anything the separates between two geographical entities which may be defined by a political entity or...
13 Pages (3250 words) Term Paper

In the 19th century, marijuana became a common preference for ma...
6 Pages (1500 words) Case Study
sponsored ads
Save Your Time for More Important Things
Let us write or edit the book report/review on your topic "Welfare States And Their Classification" with a personal 20% discount.
GRAB THE BEST PAPER

Let us find you another Book Report/Review on topic Welfare States And Their Classification for FREE!