Comments (0)
Add to wishlist Delete from wishlist
Cite this document
Summary
This essay will examine the structural elements and fundamental premises of Marx’s seminal work; more specifically, it will identify the important social forces in his theory, the transformative causes for revolutionary action, the stages by which the revolution would occur…
Download full paper File format: .doc, available for editing
HIDE THIS PAPERGRAB THE BEST PAPER97.5% of users find it useful 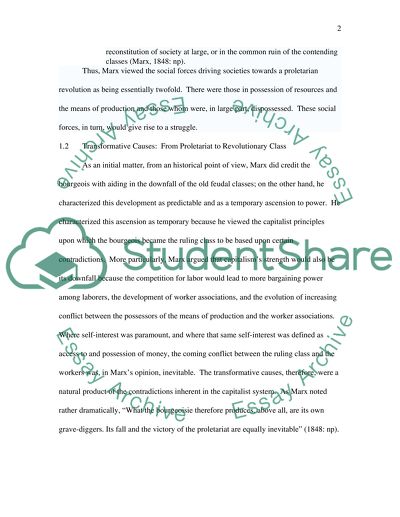 Extract of sample "A Communist Manifesto and Social Movements"

Download file to see previous pages Generally speaking, Marx set forth a theory in which conflict, or class struggle, was both caused and perpetuated by a division of individuals into a bourgeois group and a proletarian group. The bourgeois controlled the means of production in a capitalist system and the proletariat functioned as labor for wages. In this way, still speaking generally, the bourgeois were in possession of wealth and resources and the proletariat, wages aside were largely powerless and dispossessed. Marx refined this general model by characterizing a variety of social and economic relationships according to this framework; indeed, attempting to emphasize the pervasive nature of this bourgeoise-proletariat divide, he stated that,
Freeman and slave, patrician and plebeian, lord and serf, guild-master and journeyman, in a word, oppressor and oppressed, stood in constant opposition to one another, carried on an uninterrupted, now hidden, now open fight, a fight that each time ended either in a revolutionary reconstitution of society at large, or in the common ruin of the contending classes (Marx, 1848: np).
Thus, Marx viewed the social forces driving societies towards a proletarian revolution as being essentially twofold. ...
an initial matter, from a historical point of view, Marx did credit the bourgeois with aiding in the downfall of the old feudal classes; on the other hand, he characterized this development as predictable and as a temporary ascension to power. ...Download file to see next pages Read More
Share:
Tags
Cite this document
(“A Communist Manifesto and Social Movements Essay”, n.d.)
A Communist Manifesto and Social Movements Essay. Retrieved from https://studentshare.org/politics/1503794-social-movements-essay

“A Communist Manifesto and Social Movements Essay”, n.d. https://studentshare.org/politics/1503794-social-movements-essay.
Comments (0)
Click to create a comment or rate a document

CHECK THESE SAMPLES OF A Communist Manifesto and Social Movements

Erving Goffman was an astute observer of society, who immersed himself in the social environment which he was studying. He carefully observed and recorded the ways in which people’s behavior and interpersonal interactions are carried out in everyday life. He notes that “people perform their social roles and, as they do so, they produce social order through their actions and the regu...
6 Pages (1500 words) Article
sponsored ads
Save Your Time for More Important Things
Let us write or edit the essay on your topic "A Communist Manifesto and Social Movements" with a personal 20% discount.
GRAB THE BEST PAPER

Let us find you another Essay on topic A Communist Manifesto and Social Movements for FREE!