Comments (0)
Add to wishlistDelete from wishlist
Cite this document
Summary
Interest groups and political parties were generally referred to as factions by our founding fathers. The founding fathers' concerns over the problems that might be pose by the interest groups and political parties to the American politics stemmed from the fact that Man is a selfish by nature and put his interest above others most of the time as what James Madison, one of the founding fathers, mentioned in the federalists paper no…
Download full paperFile format: .doc, available for editing
HIDE THIS PAPERGRAB THE BEST PAPER94% of users find it useful 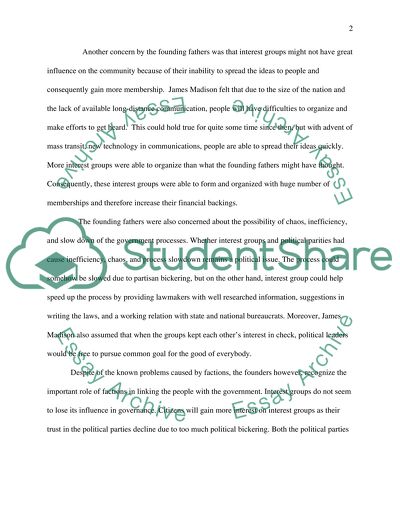 CHECK THESE SAMPLES OF Interest groups and political parties

In the nineteenth century, the term democracy still had uncomplimentary connotations, most of the time; some understand it as a system of mob rule. Now, however, we are all democrats. Liberals, conservatives, socialists, communists, anarchists, and even fascists are all eager to proclaim the virtues of democracy and to demonstrate their own democratic credentials. Indeed, as the major ideological systems faltered and collapsed in the late twentieth century, the flames of democracy appear to burn yet more strongly (Huth & Allee, 2003). As the pull of socialism paled, and the intrinsic worth of capitalism has been called into query, democracy appeared as possibly the single unwavering and lasting principle in the postmodern poli...
6 Pages(1500 words)Assignment

Austria or you may call is the Republic of Austria in official terminology is located in Central Europe. Although the population figures do not touch the danger limit but the talent and resources are worthwhile there. Germany and Hungry are also near this region. Italy is in the south of Austria. Switzerland will be seen in the west. So, now you can realize the importance of this region clearly.
The GDP is also impressive here. You can say the economy is strong and it has much depth. The strong social market economy is the result of development and proper management by the government (DArt & Turner 2008). Traders find flexibility in business operations. Labor has a positive approach to work and jobs.
There was a tren...
9 Pages(2250 words)Term Paper
sponsored ads
Save Your Time for More Important Things
Let us write or edit the essay on your topic "Interest groups and political parties" with a personal 20% discount.
GRAB THE BEST PAPER

Let us find you another Essay on topic Interest groups and political parties for FREE!