A Circuit Comprising a Resistor and Capacitor - Assignment Example

Comments (0)
Add to wishlistDelete from wishlist
Cite this document
Summary
This assessment “A Circuit Comprising a Resistor and Capacitor” requires to make reports detailing how the student would construct and test an electronic circuit.  The scholar needs to detail an above-mentioned circuit to produce a first-order low pass filter with a given cut-off frequency.
…
Download full paperFile format: .doc, available for editing
HIDE THIS PAPERGRAB THE BEST PAPER98.8% of users find it useful 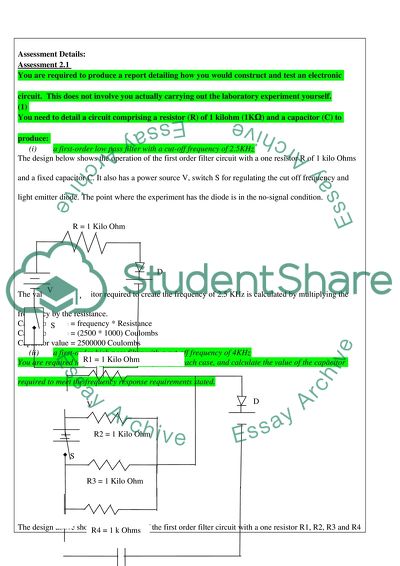 Extract of sample "A Circuit Comprising a Resistor and Capacitor"

Download file to see previous pages The design shows the operation of the first order filter circuit with a one resistor R1, R2, R3 and R4 each of 1 kilo Ohms. It also shows fixed capacitor C, a power source V, switch S for regulating the cut off frequency and light emitter diode.
Capacitor value = frequency * Resistance
Capacitor value = (4000 * 4000) Coulombs
Capacitor value = 16000000 Coulombs
You need to detail a laboratory experiment stating how you would test these two circuits.
You need to include the following sections in your account:
The aim of the experiment – a brief introduction to the experiment
This is an experiment to test the behavior of the designed first order filter circuits.  It uses various ranges of cut-off frequencies to determine the appropriate capacitor values that are required for the first order filter circuits.
Construction of the circuit: How you would construct the circuit suitable for this experiment:  this may involve (a) a prototype board (soldered or plug-in type) using discrete resistor and capacitor components, or (b) a resistor box (i.e. the type with adjustable dials to select the required value) and a similar capacitor box.
The process of circuit design for the experiment involves identifying the required components of the circuit, with the required specification. The next step involved is by drafting a prototype which has the presentations of the discrete resistor, capacitor box, power source, switch, and the diodes.
In an alternative design, after identifying the right components for the experiment, the experiment drafts a prototype presenting signal generator (In this case, the light emitter diode, capacitor box and capacitor box for the purpose of varying the resistance in the entire circuit).
Equipment used for the experiment.  This may involve a signal generator, an oscilloscope, suitable connecting wires and any other suitable laboratory equipment you would need. ...Download file to see next pagesRead More
Share:
Tags
Cite this document
(“A Circuit Comprising a Resistor and Capacitor Assignment”, n.d.)
A Circuit Comprising a Resistor and Capacitor Assignment. Retrieved from https://studentshare.org/physics/1802385-re-assessment-21-comprises-production-of-a-report-to-detail-how-you-would-build-and-test-a-filter-circuit

“A Circuit Comprising a Resistor and Capacitor Assignment”, n.d. https://studentshare.org/physics/1802385-re-assessment-21-comprises-production-of-a-report-to-detail-how-you-would-build-and-test-a-filter-circuit.
Comments (0)
Click to create a comment or rate a document

CHECK THESE SAMPLES OF A Circuit Comprising a Resistor and Capacitor

... Two-Way Crossover, Second Order Butterworth A two way crossover, second order Butterworth filter circuit is as shown in the figure below. High pass and low pass 2nd order Butterworth 2-way crossover Filter (ApICSLLc 2011) This is a passive filter circuit that combines inductance and capacitance to allow a specific range of signal frequency to pass and stops those out of its range. The simple LC network forms a series tuned network, where if we consider the low pass filter the series component (inductor) reactance increases while that of the shunt component (capacitor) decreases. This phenomenon causes a doubled increase in attenuation in comparison to a simple resistor-capacitor or resistor-inductor filter. (Winder 1997... in the low...
4 Pages(1000 words)Essay

...much human involvement. According to Harper (2001), most of the PCAs used in modern electronic gadgets like televisions, radios, refrigerators etc. are produced through mass production. Besides, the use of equipment for the manufacturing process and the automated task of placing and soldering components simplify the task of troubleshooting and maintenance. Thus, the incidence of incorrect wiring on short circuiting can be reduced and the entire process can be monitored at all times. Jawitz (2008) says that over the years, the size of electronic components has reduced drastically thereby facilitating the construction of highly complex circuitry on PCBs of smaller sizes. Many electronic components like transistors and...
8 Pages(2000 words)Essay

...the time constant is the gradient of the graph obtained after plotting the values of Q against t/RC. This constant (gradient of the graph can be obtained at any point without necessarily projecting the graph to point 0) hence the constant of time during charging and discharging processes. However, the experiment has a lot of flaws hindering the acquisition of accurate measurements of both the voltage stored in the capacitors during charging and that lost during the discharge processes as well as the capacitance of the resistors. These flaws often act as the sources of errors in such experiments. The flow of current within the circuit is often affected by several factors varying from the...
3 Pages(750 words)Essay

...of voltage, current, and resistance Note: The rules of series and parallel circuits must be applied selectively to circuits containing both types of interconnections. Technique Analysis The goal of series-parallel resistor circuit analysis is to be able to determine all voltage drops, currents, and power dissipations in a circuit. The general strategy to accomplish this goal is as follows. Step 1: Assess which resistors in a circuit are connected together in simple series or simple parallel. Step 2: Re-draw the circuit, replacing each of those series or parallel resistor combinations...
5 Pages(1250 words)Essay

...Report Introduction Resistor s back the early 1920s during the period they were the main technology separating the 1920s radio with the later designs. Carbon resistors were the first categories of resistors and used regularly due to the thermal performance of the resistor. Compared to the Wire Wound resistor, carbon resistors could be used in the AC circuit due to their performance. Over time, changes in technology have given rise to new and efficient types of resistors. There are two categories of resistors, variable resistor and fixed resistor. These...
9 Pages(2250 words)Book Report/Review

...4: Current against Time 2. Report 2.1. Values of the Parameters The parameters being used in the simulation are voltage, electric current, electric charge from the capacitors, resistance, power and time. The ranges of the values used are shown below: Parameter Upper Limit Lower Limit Voltage (V) 2 5 Electric Charge - Te 10 20 Electric Charge – Ti 100 200 Resistance R1 10 20 Resistance R2 10 20 Time (Seconds) 20 30 2.2. Introduction The simulation of the electric circuit in this exercise takes three dimensions, each of which shows a unique result. The methods are simulation with ODE, Powersim toolbox and Simulink and State Space block (Brian, 27). The output demonstrates the variation of the electric...
2 Pages(500 words)Lab Report

...Wright Univeristy BME/ISE 1110L Section Fundamentals of Biomedical and Industrial Engineering Circuit Soldering Submitted By: Submitted Date () Circuit Soldering Soldering of circuits requires that several considerations are taken into account before any soldering can begin. The first consideration is the absorption of water. During soldering, the temperature can cause blistering between the conductor and the substrate. Hence, it is important to dry the materials before soldering can begin. The temperatures of the materials must be considered as they have different temperatures. This helps in hindering melting of these materials. After soldering, it is important to clean the...
2 Pages(500 words)Essay
sponsored ads
Save Your Time for More Important Things
Let us write or edit the assignment on your topic "A Circuit Comprising a Resistor and Capacitor" with a personal 20% discount.
GRAB THE BEST PAPER

Let us find you another Assignment on topic A Circuit Comprising a Resistor and Capacitor for FREE!