Comments (0)
Add to wishlistDelete from wishlist
Cite this document
Summary
She was a great philosopher and feminist who believed that nurturing has a great contribution to the prevention of wars (Duane and Warren 89). In her work, she came up with various theories to support…
Download full paperFile format: .doc, available for editing
HIDE THIS PAPERGRAB THE BEST PAPER97.2% of users find it useful 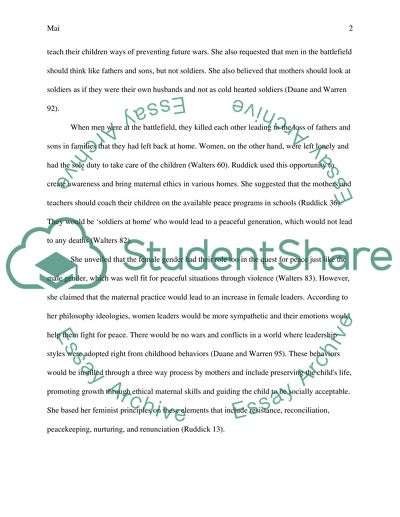 Jenny Mai March 30, Sara Ruddick campaigned for the maternal peacemaking process during war times. She was a great philosopher and feminist who believed that nurturing has a great contribution to the prevention of wars (Duane and Warren 89). In her work, she came up with various theories to support her argument and come up with a foundation of feminist peace politics (Ruddick 8). One of the main aspects to her argument is maternal love. According to Sara, maternal practices had the capacity to derive rational thoughts that became significant contributions to peace politics compared to other disciplines. A mothers love led to distinctive ways of thinking and became an important resource to female politics (176).
Representing women, she claimed that a mother who trained his/her child on how to uphold peace was a soldier in her own field (Duane and Warren 89). Children would be taught at home and in schools on how to adopt peaceful methods of conflict resolution. Children would be taught at home and in schools on how to adopt peaceful methods of conflict resolution. She gathered most of her data from military families to prove that mothering was a practice and not an obligation (Page 177).
Sara relates goals and practices whereby she argues that maternal practices provided peaceful thinking criteria to children. She criticizes the military thought by introducing peaceful maternal care. According to (Duane and Warren 92), children who had knowledge in conflict resolution later became leaders in the society who preached peace and not war. She used feminist related ethics to cause awareness on peace programs (Ruddick 15). Mothers were advised to teach their children ways of preventing future wars. She also requested that men in the battlefield should think like fathers and sons, but not soldiers. She also believed that mothers should look at soldiers as if they were their own husbands and not as cold hearted soldiers (Duane and Warren 92).
When men were at the battlefield, they killed each other leading to the loss of fathers and sons in families that they had left back at home. Women, on the other hand, were left lonely and had the sole duty to take care of the children (Walters 60). Ruddick used this opportunity to create awareness and bring maternal ethics in various homes. She suggested that the mothers and teachers should coach their children on the available peace programs in schools (Ruddick 36). They would be ‘soldiers at home who would lead to a peaceful generation, which would not lead to any deaths (Walters 82).
She unveiled that the female gender had their role too in the quest for peace just like the male gender, which was well fit for peaceful situations through violence (Walters 83). However, she claimed that the maternal practice would lead to an increase in female leaders. According to her philosophy ideologies, women leaders would be more sympathetic and their emotions would help them fight for peace. There would be no wars and conflicts in a world where leadership styles were adopted right from childhood behaviors (Duane and Warren 95). These behaviors would be instilled through a three way process by mothers and include preserving the childs life, promoting growth through ethical maternal skills and guiding the child to be socially acceptable. She based her feminist principles on these elements that include resistance, reconciliation, peacekeeping, nurturing, and renunciation (Ruddick 13).
Works Cited
Page, James. Peace education exploring ethical and philosophical foundations. Charlotte, NC: Information Age Pub., 2008. Print.
Ruddick, Sara. Maternal thinking: toward a politics of peace. Boston: Beacon Press, 2005. Print
Walters, Kerry S. Re-thinking reason: new perspectives in critical thinking. Albany: State University of New York Press, 2004. Print.
Warren, Karen, and Duane L. Cady. Bringing peace home: feminism, violence, and nature. Bloomington: Indiana University Press, 2003. Print. Read More
Share:
Tags
Cite this document
(“Feminism Essay Example | Topics and Well Written Essays - 500 words - 3”, n.d.)
Retrieved from https://studentshare.org/philosophy/1636724-feminism

CHECK THESE SAMPLES OF Feminism

.... Feminists have succeeded in protecting women from sexual assault and domestic violence and advocating for the rights of women. Feminism has developed in distinct fields rather than in one cohesive concept. The labels that delineate these fields have differed. The most common feminist theories include radical feminism, liberal feminism, lesbian feminism, Marxist feminism, socialist feminism and materialistic feminism (Tandon 45). Historical development of Feminism Historiographers of contemporary western feminist movements often speak of a first wave feminism and second wave...
6 Pages(1500 words)Essay

...as witnesses in horrifying inhuman global acts and the role of institutional policies in producing greater suffering to human beings. In the era of organized religion pain and suffering was attributed to superior powers. The gods would determine when, how, who, where and the kind of suffering to give to human beings as an indication of their displeasure. In Christianity, suffering is not considered a bad thing or experience, but an essential aspect to get closer to God. In eastern cultures, self-inflicted pain is a religious tradition and believed to be manageable (Walley 406). According to “Searching for Voices, Feminism Anthropology and the Global Debate on Female Genital Operations”, the worrier syndrome among Nicaragua women and...
6 Pages(1500 words)Essay

...and is treated unfairly in this binary relationship. The modernist sought to help women get fair treatment and stand up against their opposites - the men. The third wave of feminism, which is also referred to as the post-modern perspective, according to Wikipedia, began in the 1990s. The third wave of feminism "unlike second-wave feminism, which largely focused on the inclusion of women in traditionally male-dominated areas," it says, "seeks to challenge and expand common definitions of gender and sexuality." Jane Flax in her book 'Post-modernism and Gender Relations in Feminist Theory' states that post-modern feminism seeks to "understand and (re) constitute the self,...
10 Pages(2500 words)Essay

... Religious Feminism As much as many religions of the world would want to deny it, the status of women in the church is still not given the rightful position it deserves. In theory, every religion claims to be on the forefront in addressing issues with proper treatment of women but when given a critical consideration, one would find that none of them is actually consistent in theory and practice. For instance, despite claiming to treating women equally, none of them opposes the idea that women are inferior to men and that they must submit to men. In fact, many of them promote the view that feminism is a totally unacceptable movement as far as religion is concerned. The plight of women is generally evident in all spheres of life, both...
2 Pages(500 words)Essay

...feminism principles dictate otherwise claiming that women do not require actual feminist concerns and actions (57). Considering the activities that women tend to do according to Zeisler, the reforms might impact but not much. To explain this, the participation of women in the military is in consideration (60). Men are muscular and perform better, in the tactical field, unlike women. This implies that though the reforms wish to make women equal to men even in the military it is difficult to culminate the actual reforms. The reforms though are necessary to ensure that women get treated equally with men. Some of the reforms would negatively impact on the economy since some of the tasks given to men are specifically for men....
1 Pages(250 words)Book Report/Review

...to end oppression and misrepresentation of women (KIRSCH, 1999). To achieve this goal of eradication of women misrepresentation and oppression, feminism uses the women’s perceptions and experiences to formulate the best strategies. In the process, it embraces the different political goals that offer gender equality. The American women are on the good side as feminism campaign has done them good since it has altered their life. It is through empowerment passivity that open and critical debate has hit the media between feminists and those who are for or against feminism. Such debates are very vital since they bring out the importance of the empowerment by stimulating and rejuvenating the...
15 Pages(3750 words)Essay

...inority group which makes it hard for many people to view it as a major issue. A number of feminist factions have come up over the years fighting to safeguard women on the same opportunities and privileges as men in the society. Such include women being paid the same wage as men for the same job done, women having a say in the policies passed by the government and gives women an opportunity to expand their businesses and careers to levels they never could in the past. Feminism movements have received both the negative and positive reactions depending on the social context and the nature of the individuals themselves. These reactions range from anti-feminists to male chauvinists to pro-feminists. To most people’s surprise, there are men...
2 Pages(500 words)Essay

... Feminism If one takes a look at the social environment, one can not help noticing that it is usually comprised of different groups of people, some whom may be oppressed. That is why it is particularly important to facilitate a dialogue between various parts of the population. However, in her essay The Problem of Speaking for Others Linda Alcoff argues this action is no advisable for number of reasons. This paper will analyze these reasons. First of all, it would be important to explain why speaking for other is a problem. Thus, it must be noted that any dialogue is exchange of opinions, but one of the essential parts of this process is also the presence of a certain party that is willing to articulate its position. In other words...
2 Pages(500 words)Essay
sponsored ads
Save Your Time for More Important Things
Let us write or edit the essay on your topic "Feminism" with a personal 20% discount.
GRAB THE BEST PAPER

Let us find you another Essay on topic Feminism for FREE!