Comments (0)
Add to wishlistDelete from wishlist
Cite this document
Summary
This essay attempts to show that feminism in American cinema is full of unfulfilled promises, and that despite the best of intentions the results have been much less than what was expected and what could have been achieved. Three articles from the readings - by De Lauretis, Mayne, and Hammett - will be used to support the arguments showing that feminism in American cinema over-promised and under-delivered and that they were driven by their over-powering ambition to use masculine logic in order to change and transform gender-biased patriarchal social structures with the use of pass intellectual fads that were verbalized by a troupe of homosexual male (Foucault), Freudian (Lacan) and Marxist (…
Download full paperFile format: .doc, available for editing
HIDE THIS PAPERGRAB THE BEST PAPER93.1% of users find it useful 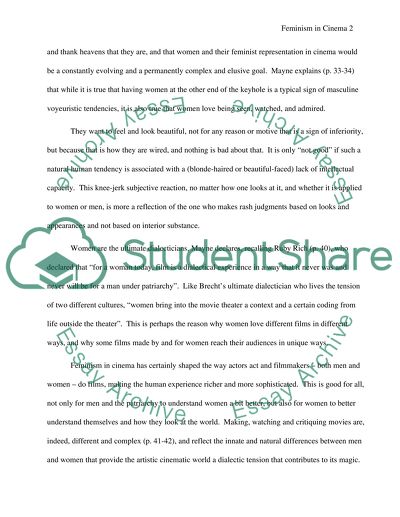 Download file to see previous pages One meaning is "films made by women" and the other meaning is "films made for women" (p. 27). The first pat of her article attempts to explain how each field within these traditional definitions was transformed by feminism over time, using the "woman at the keyhole metaphor" to show how women gained status from being objects of voyeuristic curiosity and into the curious voyeurs themselves.
As Mayne argues (p. 28), there is a need to consider "what relationships women have had traditionally and historically, as filmmakers and as film consumers, to the medium" in order to "understand how women make movies". Nothing could be farther from the truth, but this one-sided argument founded on masculine logic hides a basic natural fact: that men and women are different, and thank heavens that they are, and that women and their feminist representation in cinema would be a constantly evolving and a permanently complex and elusive goal. Mayne explains (p. 33-34) that while it is true that having women at the other end of the keyhole is a typical sign of masculine voyeuristic tendencies, it is also true that women love being seen, watched, and admired.
They want to feel and look beautiful, not for any reason or motive that is a sign of inferiority, but because that is how they are wired, and nothing is bad about that. It is only "not good" if such a natural human tendency is associated with a (blonde-haired or beautiful-faced) lack of intellectual capacity. This knee-jerk subjective reaction, no matter how one looks at it, and whether it is applied to women or men, is more a reflection of the one who makes rash judgments based on looks and appearances and not based on interior substance.
Women are the ultimate dialecticians, Mayne declares, recalling Ruby Rich (p. 40), who declared that "for a woman today, film is a dialectical experience in a way that it never was and never will be for a man under patriarchy". Like Brecht's ultimate dialectician who lives the tension of two different cultures, "women bring into the movie theater a context and a certain coding from life outside the theater". This is perhaps the reason why women love different films in different ways, and why some films made by and for women reach their audiences in unique ways.
Feminism in cinema has certainly shaped the way actors act and filmmakers - both men and women - do films, making the human experience richer and more sophisticated. This is good for all, not only for men and the patriarchy to understand women a bit better, but also for women to better understand themselves and how they look at the world. Making, watching and critiquing movies are, indeed, different and complex (p. 41-42), and reflect the innate and natural differences between men and women that provide the artistic cinematic world a dialectic tension that contributes to its magic.
Mayne's ambivalent view of women's cinema is carried over to the definition of the feminine aesthetic by de ...Download file to see next pagesRead More
Share:
Tags
Cite this document
(“Feminism in American Cinema Essay Example | Topics and Well Written Essays - 1250 words”, n.d.)
Retrieved from https://studentshare.org/miscellaneous/1499810-feminism-in-american-cinema

CHECK THESE SAMPLES OF Feminism in American Cinema

... positive feeling expressed by any person or event. In contrast, it contains a shot of a group of Americans protesting against the health plan which induces a negative feeling as the target audience usually relate to the public shown in tapes. There are no shots in this ad showing the American flag which usually gives the audience a sense of oneness, leaving a positive effect. The video does not have any positive comments regarding the health plan which means that both sides of an argument are never featured in the same ad. There are several shots in this advertisement showing various political leaders making comments regarding the health plan which aims at statistically proving the lack of support regarding the same. It includes shots...
6 Pages(1500 words)Essay
sponsored ads
Save Your Time for More Important Things
Let us write or edit the essay on your topic "Feminism in American Cinema" with a personal 20% discount.
GRAB THE BEST PAPER

Let us find you another Essay on topic Feminism in American Cinema for FREE!