Should abortions be legal - Essay Example

Comments (0)
Add to wishlistDelete from wishlist
Cite this document
Summary
SHOULD ABORTIONS BE LEGAL? Author Institute Part I: Thesis The development of the human mind has made mankind move ahead from the era of ignorance to a period of enlightenment where every individual has started to recognize their wants and rights…
Download full paperFile format: .doc, available for editing
HIDE THIS PAPERGRAB THE BEST PAPER96.9% of users find it useful 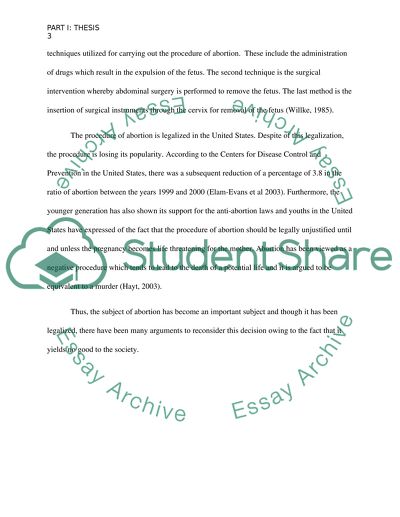 Extract of sample "Should abortions be legal"

Download file to see previous pages Many people justify abortion on the basis of the fact that the choice of abortion lies in the hands of the mother but many ethical groups argue against this issue. They present with the fact that abortion is basically the killing of a living being and hence it is morally unjustified. Abortion is an important subject and it may be considered to be legally justified in cases where the life of the mother is at stake and in other extreme cases but abortion with no strong grounds should not be permitted legally. The rise in the population of the world has resulted in the utilization of different methods of contraception. The usage of these methods is to prevent unwanted pregnancies and childbirths. Abortion is also a technique utilized for the avoidance of an unwanted pregnancy. Abortion is defined as the ending of the pregnancy by choice which results in the death of the products of conception (Merriam-Webster Dictionary). The procedure of abortion is utilized for different reasons which include family planning, contraception as well as putting a control on the population. A more important purpose of abortion is for saving the pregnant woman from life threatening emergencies that may result if the pregnancy is continued. There are different techniques utilized for carrying out the procedure of abortion. These include the administration of drugs which result in the expulsion of the fetus. The second technique is the surgical intervention whereby abdominal surgery is performed to remove the fetus. The last method is the insertion of surgical instruments through the cervix for removal of the fetus (Willke, 1985). The procedure of abortion is legalized in the United States. Despite of this legalization, the procedure is losing its popularity. According to the Centers for Disease Control and Prevention in the United States, there was a subsequent reduction of a percentage of 3.8 in the ratio of abortion between the years 1999 and 2000 (Elam-Evans et al 2003). Furthermore, the younger generation has also shown its support for the anti-abortion laws and youths in the United States have expressed of the fact that the procedure of abortion should be legally unjustified until and unless the pregnancy becomes life threatening for the mother. Abortion has been viewed as a negative procedure which tends to lead to the death of a potential life and it is argued to be equivalent to a murder (Hayt, 2003). Thus, the subject of abortion has become an important subject and though it has been legalized, there have been many arguments to reconsider this decision owing to the fact that it yields no good to the society. References Top of Form Elam-Evans, L. D., Strauss, L. T., Herndon, J., Parker, W. Y., Bowens, S. V., Zane, S., Berg, C. J., ... Centers for Disease Control and Prevention. (January 01, 2003). Abortion surveillance--United States, 2000.Mmwr. Surveillance Summaries : Morbidity and Mortality Weekly Report. Surveillance Summaries / Cdc, 52, 12, 1-32. Hayt, Elizabeth.(2003, March 30). Surprise, Mom: I'm Against Abortion. The New York Times. Retrieved from: http://www.nytimes.com/2003/03/30/style/surprise-mom-i-m-against-abortion.html Bottom of Form Part II: Anti-Thesis Abortion is an issue that arose and became a subject central to debates in the United States in the second half of the twentieth century. The Supreme Court of the United States took a final stand on the issue and the procedure of abortion was legalized in the year 1973 following the legal case of Roe v Wade. ...Download file to see next pagesRead More
Share:
Tags
Cite this document
(“Should abortions be legal Essay Example | Topics and Well Written Essays - 1500 words”, n.d.)
Retrieved from https://studentshare.org/philosophy/1422076-should-abortions-be-legal
(Should Abortions Be Legal Essay Example | Topics and Well Written Essays - 1500 Words)
https://studentshare.org/philosophy/1422076-should-abortions-be-legal.
“Should Abortions Be Legal Essay Example | Topics and Well Written Essays - 1500 Words”, n.d. https://studentshare.org/philosophy/1422076-should-abortions-be-legal.
Comments (0)
Click to create a comment or rate a document

CHECK THESE SAMPLES OF Should abortions be legal

The PL 94-142 Education for all Handicapped Children Act (1975) or EHA is a piece of federal legislation that requires every State of the Union, with the exception of those states that do not provide free public education to children between 3 to 21 years of age; to provide free and appropriate public education for all the children in the age group of 3 to 21 years. Moreover, such education should be provided irrespective of physical disability or its gravity. This law is the first of its kind that ensures Free and Appropriates Public Education or FAPE for all the physically handicapped children in the US (Law and Exceptional Students).
The Individual Education Plan or IEP is an individualized education program for a disabled...
6 Pages(1500 words)Assignment
sponsored ads
Save Your Time for More Important Things
Let us write or edit the essay on your topic "Should abortions be legal" with a personal 20% discount.
GRAB THE BEST PAPER

Let us find you another Essay on topic Should abortions be legal for FREE!