The Process of Creation an Art Project - Coursework Example

Comments (0)
Add to wishlistDelete from wishlist
Cite this document
Summary
The paper "The Process of Creation an Art Project" describes that as an artist I have grown in that after this project I feel I can tackle any large project in the same vein. I am considering working with the same media but adding on other ideas to come up with a style that is truly mine…
Download full paperFile format: .doc, available for editing
HIDE THIS PAPERGRAB THE BEST PAPER93.7% of users find it useful 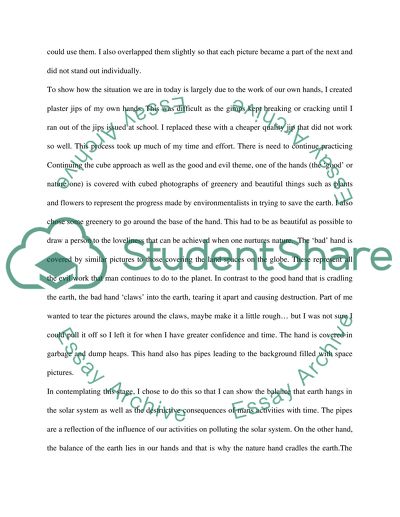 Extract of sample "The Process of Creation an Art Project"

Download file to see previous pages I chose pictures of the sea in varying states, from calm seas to violently stormy seas showing differing color intensities. For the land I chose some pictures showing greenery and beautiful landscapes, placing these on a small fraction of the land sections. I decided against using any animal pictures as this were not quite in line with what I was planning. The rest of the land section I covered with pictures of factories, large buildings and garbage to show the dire situation that our land is in. The more fuming the factory scenes were the better! I also have pictures of pipes leading to the seas, showing how industrial and domestic activities are polluting our earth. I put a lot of effort into the selection of the pictures, a time-consuming process. I shaped all the continents while continuing with the cube style. It was difficult to use cubes for the continents. Some were not too co-operative, but I am pleased with the final outcome. The style I chose for my work was largely influenced by the works of artists David Hockney, who chose photographs for collages as well as Camille Zakharia for the cube technique. I was also greatly influenced by Charles Fazzino who works with 3-D in Styrofoam as I have done here. This meant that I had to cut the pictures to exact sizes before I could use them. I also overlapped them slightly so that each picture became a part of the next and did not stand out individually.
To show how the situation we are in today is largely due to the work of our own hands, I created plaster tips of my own hands. This was difficult as the gimps kept breaking or cracking until I ran out of the tips issued at school. I replaced these with a cheaper quality jip that did not work so well. This process took up much of my time and effort. There is need to continue practising Continuing the cube approach as well as the good and evil theme, one of the hands (the 'good' or nature one) is covered with cubed photographs of greenery and beautiful things such as plants and flowers to represent the progress made by environmentalists in trying to save the earth. I also chose some greenery to go around the base of the hand. This had to be as beautiful as possible to draw a person to the loveliness that can be achieved when one nurtures nature. The 'bad' hand is covered by similar pictures to those covering the land spaces on the globe. These represent all the evil work that man continues to do to the planet. In contrast to the good hand that is cradling the earth, the bad hand 'claws' into the earth, tearing it apart and causing destruction. Part of me wanted to tear the pictures around the claws, maybe make it a little rough but I was not sure I could pull it off so I left it for when I have greater confidence and time. The hand is covered in garbage and dump heaps. This hand also has pipes leading to the background filled with space pictures.
In contemplating this stage, I chose to do this so that I can show the balance that earth hangs in the solar system as well as the destructive consequences of man's activities with time. The pipes are a reflection of the influence of our activities on polluting the solar system. On the other hand, the balance of the earth lies in our hands and that is why the nature hand cradles the earth. ...Download file to see next pagesRead More
Share:
Tags
Cite this document
(Art Project Coursework Example | Topics and Well Written Essays - 1750 words, n.d.)
Art Project Coursework Example | Topics and Well Written Essays - 1750 words. https://studentshare.org/performing-arts/1506148-art-project
(Art Project Coursework Example | Topics and Well Written Essays - 1750 Words)
Art Project Coursework Example | Topics and Well Written Essays - 1750 Words. https://studentshare.org/performing-arts/1506148-art-project.
“Art Project Coursework Example | Topics and Well Written Essays - 1750 Words”. https://studentshare.org/performing-arts/1506148-art-project.
Comments (0)
Click to create a comment or rate a document

CHECK THESE SAMPLES OF The Process of Creation an Art Project

8 Pages(2000 words)Coursework
sponsored ads
Save Your Time for More Important Things
Let us write or edit the coursework on your topic "The Process of Creation an Art Project" with a personal 20% discount.
GRAB THE BEST PAPER

Let us find you another Coursework on topic The Process of Creation an Art Project for FREE!