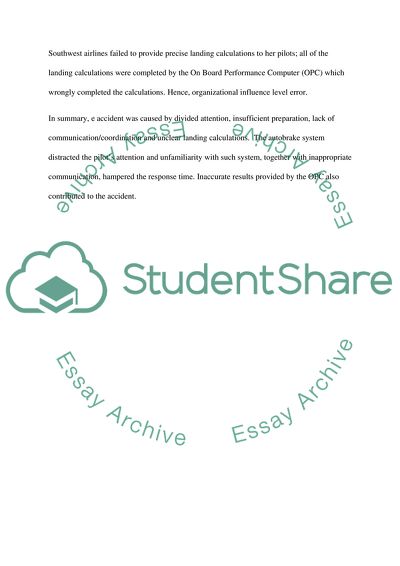 Human Error Case Study On December 8, 2005, a Boeing 737-7H4, N47WN- operated by Southwest Airlines- was involved in an accident at Chicago Midway International Airport. The airplane went through the perimeter fence and blast fence of the airport and knocked an automobile on the adjacent road before coming to a stop; the airplane was substantially damaged (NTSB, 2005). This case study applies the data analysis tools of the Human Factors Analysis and Classification System (HFACS) to this accident to analyze the human error aspects of the accident.
HFACS framework embodies four levels of human failure (unsafe acts, preconditions for unsafe acts, unsafe supervision and organizational influences) that lead to an accident (Harris, 2011). Errors correspond to human activities that fall short of producing intended outcomes (Wiegmann and Shappell, 2012). In this accident, the captain made a skill-based error by failing to prioritize his attention; he told the investigators that the use of the autobrake system diverted his concentration from thrust reversers. Violation refers to willful discount for safety rules and regulations (OConnor & Cohn, 2010). Violation committed in this case if failure by the pilots to adequately familiarize themselves with the autobrake system; they were using it for the first time. They both resulted into delayed response.
Preconditions for unsafe acts refer to incident resulting into unsafe acts (Wiegmann and Shappell, 2012). In this case, the pilots lacked effective communication/coordination. This can be seen when the first officer took away the captain’s hand from the thrust reverser levers rather than directing him to engage thrust reversers. Under unsafe supervision, the pilots were not allowed sufficient brief time as they departed without the latest updated weather information and dispatch documents and only evaluated and analyzed the procedures for autobrake system while en route.
Southwest airlines failed to provide precise landing calculations to her pilots; all of the landing calculations were completed by the On Board Performance Computer (OPC) which wrongly completed the calculations. Hence, organizational influence level error.
In summary, e accident was caused by divided attention, insufficient preparation, lack of communication/coordination and unclear landing calculations. The autobrake system distracted the pilot’s attention and unfamiliarity with such system, together with inappropriate communication, hampered the response time. Inaccurate results provided by the OPC also contributed to the accident.
References
Harris, D. (2011). Human performance on the flight deck. Farnham, Surrey: Ashgate.
NTSB (2005). Runway overrun and collision Southwest Airlines flight 1248 Boeing 737-7H4, N47WN Chicago Midway International Airport Chicago, Illinois December 8, 2005.
OConnor, P. E., & Cohn, J. V. (2010). Human performance enhancement in high-risk environments: Insights, developments, and future directions from military research. Santa Barbara: Praeger.
Wiegmann, D. A., and Shappell, S. A. (2012). A human error approach to aviation accident analysis: The human factors analysis and classification system. Aldershot: Ashgate. Read More
Share:
Tags
Cite this document
(“Human Error Case Study Example | Topics and Well Written Essays - 250 words”, n.d.)
Retrieved from https://studentshare.org/people/1701845-human-error

CHECK THESE SAMPLES OF Human Error

Technology and Human Error in Aviation

...rcraft and monitors its flight, and process data and communication transmission between ATC (air traffic controller) and pilot, among air traffic controllers, and among flight crews. It may ensure airport and aircraft safety against accidents, unpleasant incidents, and delays; and give automatic weather reports so as to warn pilots of the coming weather conditions. Technology allows for accurate calculations and computations useful in designing aircraft and saves important data on maintenance and inspection history and some other specifications related to the plane. These data are used to check if the plane is still fit to fly or not (Dhillion, 2007). Analysis of Human Error How tragic is the effect of human error in aviation? About 70 –...
13 Pages (3250 words) Term Paper

The Potential Influence of Environmental Factors on Human Error

...tively address these concerns. This study involves identifying and controlling the risks from environmental factors in the working environment. Various factors affect worker’s potential and their productivity that are being described below. This document first deals with the work place, its design and the social aspects associated with it. Exposure to noise in work place has lead to hearing loss. There are several other factors like pace of work, provision for breaks, duration of work and the number and the timing of shifts. Here an attempt is made to address those primary concerns in work place of a Broking company, providing with some effective solution to avoid human errors caused by environmental factors. The design of an effective...
15 Pages (3750 words) Essay

... a question regarding the imperfection of man. If God is perfect, why is there room for error or imperfection? Descartes presents a convincing argument as a reply to this question which is; there is a scale having two extremes that are nothingness and perfection, and man exists somewhere between these two extremes. Man is less perfect than God but he is more than mere nothingness. Therefore, error is not a positive reality according to Descartes but it just the absence of what is correct. Thus Descartes infers that man can err without God giving him any ability to do so but error happens only due to the mortality of the ability of the man to judge the truth. Descartes thus describes the existence of human error as the inability of the man...
3 Pages (750 words) Research Paper

...that the bud vase broke due to human error. But when one is evaluating an accident from a piece of system of equipment, then it might have happened as a result of human error. It might also be inappropriate manufacturing or installation fault or even a slew of some other possibilities (Feynman, 1988). There is an old incident of I Love Lucy whereby Lucy lands a job at an assembly line boxing candies. However, the live is moving in a very fast manner that she is not able to keep up and wacky comic romps ensue (Sage, 1992). The system’s breakdown was not a mechanical problem but human error. Therefore, human...
4 Pages (1000 words) Essay

... for the successive works pertaining to the same topic. Referencing around eighty books, 'Human Error' today is cited itself by more than a hundred works by authors like A. Hale, John R. Wilson and E. J. Lovesay etc. Summary: The book draws a schism of three parts where the first portion comprising of the first two chapters inoculate the fundamental ideas, research traditions and brings an account of background studies pertaining to errors. The middle part from chapter three to five elucidates the error mechanisms and the common reasons behind a wide range of errors. The final section comprising of the remaining chapters throws light on the result of errors that range from their detection, unintentional contributions to them...
4 Pages (1000 words) Essay

﻿
A Review
The author’s concern regarding aviation safety involves the amazing lack of communication skills exhibited by failed cockpit crews. Helmreich cites several accidents in which members of the crew sensed problems, but failed to communicate concerns urgently or properly. As a professor of Psychology at the University of Texas, Austin, since 1966, he has taught interpersonal communications. Helmreich’s study concluded that the crews tend to mitigate any potential problems; however, some situations can lead to disaster, such as:
1. Focus on the wrong problem.
2. Failed communications
3. Technology and its misuse in the cockpit.
The root cause of these incidents is failure of redundant systems. For example,...
2 Pages (500 words) Article

... number of accidents. The authors undertook a study that investigated post-accident data in US naval aviation accident database. The source is a journal, which means it is peer-reviewed and thus credible. In addition, the study is based on analysis of post-accident data, and not assumptions, which makes it reliable and credible. Moreover, the chances of biases associated with personal view of the authors are limited since the results are based on actual data. In addition, the study is relevant in the study of the influence of human error on aviation accidents. Regarding authors’ credentials, Douglas is an associate professor who has undertaken several researches on human factors and flight safety. On the other hand, Dr. Scott Shappel...
4 Pages (1000 words) Annotated Bibliography

... of or poor Crew Resource Management (CRM) facilitates most of these accidents. US airlines fail to give their crew proper training and CRM, which are very vital in preventing human errors in the aviation industry. Another important factor in human errors and aviation accidents is the ‘Swiss cheese model’ in which defensive systems consists of slices or pieces, as well as holes resulting from opening, and displacement of the slices, which result in human error. Since human errors occur due to psychological and physiological factors, aviation psychology is an effective solution for human failures in aviation. In addition, there should be proper training and CRM for aviation crew focusing on human factors. Human Error and Aircraft Accidents...
6 Pages (1500 words) Research Paper

The Potential Influence of Environmental Factors on Human Error

.... This document first deals with the work place, its design and the social aspects associated with it. Exposure to noise in work place has lead to hearing loss. There are several other factors like pace of work, provision for breaks, duration of work and the number and the timing of shifts. Here an attempt is made to address those primary concerns in work place of a Broking company, providing with some effective solution to avoid human errors caused by environmental factors. The design of an effective work place involves appropriate lighting, controlled noise level to avoid fatigue and generate more interest and increase motivational level. The Visual Environment The primary focus here is on the visual display of information...
12 Pages (3000 words) Dissertation

...or a portion of the task was not done with the recommended specification. Human error can occur because many different circumstances. This paper, therefore, views three critical areas of concern that are fatigue, communication and vision. It is paramount to study and understand these primary causes that cause an error in the aviation industry so that trends and breakdowns can be looked at. This will ensure the future safety of the aviation industry should be in line with the standards. For the outstanding reputation of the aviation, industry in the world to continue winning the trust of the clients and reach record-breaking level then the human error...
9 Pages (2250 words) Research Paper
sponsored ads
Save Your Time for More Important Things
Let us write or edit the case study on your topic "Human Error" with a personal 20% discount.
GRAB THE BEST PAPER

Let us find you another Case Study on topic Human Error for FREE!