Comments (0)
Add to wishlistDelete from wishlist
Cite this document
Summary
William Seward Burroughs II, born on Feb 5, 1914, was a renowned American novelist, essayist, social critic, painter and spoken word performer. He was a prominent member of the Beat Generation, an experimental author who was most admired for his influence on popular culture apart from literature…
Download full paperFile format: .doc, available for editing
HIDE THIS PAPERGRAB THE BEST PAPER97.6% of users find it useful 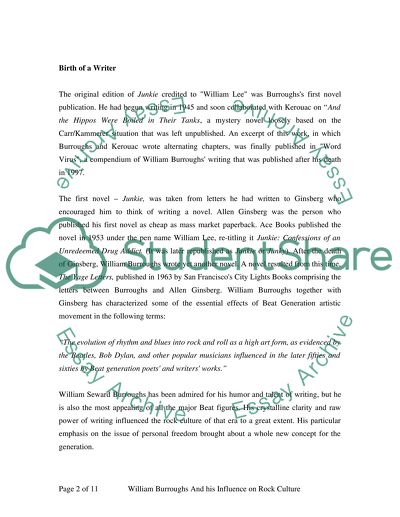 Download file to see previous pages William was born as the youngest son to a business family in St. Louis. He attended the John Burroughs School in St. Louis where his first published essay, "Personal Magnetism," was published in the John Burroughs Review in 1929. He then attended The Los Alamos Ranch School in New Mexico, which was stressful for him and was soon expelled from Los Alamos after taking chloral hydrate in Santa Fe with a fellow student. He finished high school at Taylor School in St. Louis and, in 1932, left home to pursue an arts degree at Harvard University. He was introduced to the gay culture at Harvard.
According to According to Ted Morgan's Literary Outlaw, "His parents, upon his graduation, had decided to give him a monthly allowance of $200 out of their earnings from Cobblestone Gardens, a tidy sum in those days. It was enough to keep him going, and indeed it guaranteed his survival for the next twenty-five years, arriving with welcome regularity. The allowance was a ticket to freedom; it allowed him to live where he wanted to and to forgo employment. -Ted Morgan, Literary Outlaw. p.65. New York:Avon Books, 1988."
The original edition of Junkie credited to "William Lee" was Burroughs's first novel publication. He had begun writing in 1945 and soon collaborated with Kerouac on "And the Hippos Were Boiled in Their Tanks, a mystery novel loosely based on the Carr/Kammerer situation that was left unpublished. An excerpt of this work, in which Burroughs and Kerouac wrote alternating chapters, was finally published in "Word Virus", a compendium of William Burroughs' writing that was published after his death in 1997.
The first novel - Junkie, was taken from letters he had written to Ginsberg who encouraged him to think of writing a novel. Allen Ginsberg was the person who published his first novel as cheap as mass market paperback. Ace Books published the novel in 1953 under the pen name William Lee, re-titling it Junkie: Confessions of an Unredeemed Drug Addict. (It was later republished as Junkie or Junky). After the death of Ginsberg, William Burroughs wrote yet another novel. A novel resulted from this time, The Yage Letters, published in 1963 by San Francisco's City Lights Books comprising the letters between Burroughs and Allen Ginsberg. William Burroughs together with Ginsberg has characterized some of the essential effects of Beat Generation artistic movement in the following terms:
"The evolution of rhythm and blues into rock and roll as a high art form, as evidenced by the Beatles, Bob Dylan, and other popular musicians influenced in the later fifties and sixties by Beat generation poets' and writers' works."
William Seward Burroughs has been admired for his humor and talent of writing, but he is also the most appealing of all the major Beat figures. His crystalline clarity and raw power of writing influenced the rock culture of that era to a great extent. His particular emphasis on the issue of personal freedom brought about a whole new concept for the generation.
Possibly, William was one of the most colorful writers who emerged on scene from the Beat period, and he led an extremely interesting life. He graduated from Harvard University in 1936 and was well known during his college days ...Download file to see next pagesRead More
Share:
Tags
Cite this document
(“William Burroughs and Rock Culture Essay Example | Topics and Well Written Essays - 4000 words”, n.d.)
William Burroughs and Rock Culture Essay Example | Topics and Well Written Essays - 4000 words. Retrieved from https://studentshare.org/people/1521483-william-burroughs-and-rock-culture

CHECK THESE SAMPLES OF William Burroughs and Rock Culture

William Walker as the American Filibuster

William Walker is regarded as an icon of US imperialism in Central America. Born in Nashville, Tennessee, Walker attempted to conquer Mexican territory on an expedition in 1853. In 1854, he declared Lower California and Sonora from Mexico as an independent republic nation. Subsequently, he attacked Nicaragua, established his own government there, and declared himself the president of Nicaragua; and the US formally recognized his government (Walker, William (1824 - 1860).In The Hutchinson Unabridged Encyclopedia including Atlas 2005).
Despite recognizing Walker’s government, the United States did not support it economically or politically. The other Central American countries formed a coalition to fight against Walker an...
11 Pages(2750 words)Case Study

We shall prove how this work of Wordsworth fits as a ‘poem of nature’, an investigation and examination of human life, the choice of intuition against reason and pastoral against urban and a transcendental spiritual truth – all of which are the features of Romanticism.
‘Michael’ is famous for embodying a feature that Wordsworth is particularly popular for – the feature of ‘nature poetry’. Nature is a part of human life that is connected with the spirit of God. The understanding, experience and the proximity of man with nature define spiritual realization. And indeed, for this reason, he writes:
This emphasis of nature in this and other poems are often noticed in his elabora...
6 Pages(1500 words)Assignment

Let us find you another Essay on topic William Burroughs and Rock Culture for FREE!