Comments (0)
Add to wishlistDelete from wishlist
Cite this document
Summary
SEC Charges India Company in $18 Accounting Fraud 1. The SEC charged Indian company Satyam Computer Services $10 to settle a fraud case against them. The company was listed on both the Indian stock exchange and the New York Stock Exchange. Their business was mainly outsourcing…
Download full paperFile format: .doc, available for editing
HIDE THIS PAPERGRAB THE BEST PAPER97.1% of users find it useful 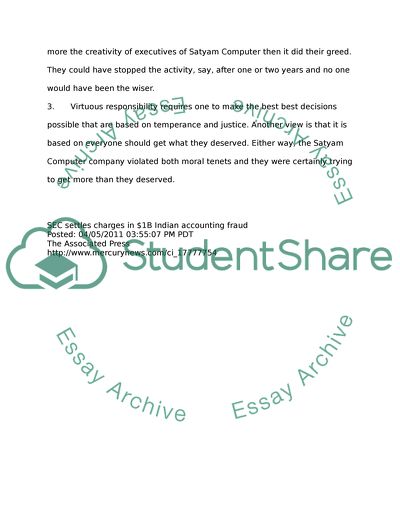 SEC Charges India Company in $18 Accounting Fraud The SEC charged Indian company Satyam Computer Services $10 to settle a fraud case against them. The company was listed on both the Indian stock exchange and the New York Stock Exchange. Their business was mainly outsourcing. Between 2005 to 2009 they created over 6,000 phony invoices to doubled their assets on the company's books, reflecting an overall increase in value of the company. The SEC also fined the company's accountants, Price Waterhouse, $6 million for allowing the fraud to go on without reporting it. In effect, the accountants were complicitors in the scheme. The was recently taken over by the Indian government who also placed criminal charges against its several executives. The moral issue involved here is simply that they were wrong to lie about their assets and the accountants were wrong to knowingly report the soup up numbers. 2. Are there any arguments that could justify such fraud. Was there a greater good the Satyam Computer Services was seeking? One could argue that they had to do what they did to attract investment so that the company could experience further growth and attract new clients. In this possibility, as the new clients were brought on, the phoney invoices would be removed until they were all gone. If this argument were allowed then other companies could do the same until there was nothing but a paper empire built in the business world. Another argument would be that the activity represented more the creativity of executives of Satyam Computer then it did their greed. They could have stopped the activity, say, after one or two years and no one would have been the wiser. 3. Virtuous responsibility requires one to make the best best decisions possible that are based on temperance and justice. Another view is that it is based on everyone should get what they deserved. Either way, the Satyam Computer company violated both moral tenets and they were certainly trying to get more than they deserved. SEC settles charges in $1B Indian accounting fraud Posted: 04/05/2011 03:55:07 PM PDT The Associated Press http://www.mercurynews.com/ci_17777754 Read More
Share:
Tags
Cite this document
(“Business Ethics Article Example | Topics and Well Written Essays - 250 words - 3”, n.d.)
Retrieved from https://studentshare.org/other/1415351-business-ethics
(Business Ethics Article Example | Topics and Well Written Essays - 250 Words - 3)
https://studentshare.org/other/1415351-business-ethics.
“Business Ethics Article Example | Topics and Well Written Essays - 250 Words - 3”, n.d. https://studentshare.org/other/1415351-business-ethics.
Comments (0)
Click to create a comment or rate a document

CHECK THESE SAMPLES OF Business Ethics

An ethical scenario arose during my first six months in this management role involving a 21-year-old employee who I witnessed smoking pot in the parking lot over lunch break. This scenario demanded that I consider the needs of the employee, as well as satisfying my obligations for enforcing the strict drug use policy administered at the senior levels of the company. This project describes the ethical scenario in detail, offering personal reflections on the incident as well as suggesting an ethical framework for handling situations like this in the future.
The situation which occurred had a young worker smoking pot on his lunch break on the company grounds. This, according to policy, is a termination offense and it is expected...
7 Pages(1750 words)Case Study
sponsored ads
Save Your Time for More Important Things
Let us write or edit the article on your topic "Business Ethics" with a personal 20% discount.
GRAB THE BEST PAPER

Let us find you another Article on topic Business Ethics for FREE!