Comments (0)
Add to wishlistDelete from wishlist
Cite this document
Summary
Instructor Date Globalization In this piece, Robert Wright uses history as a bastion of globalization. He terms the fall of the Twin Towers as coinciding – around the same time – with the fall of globalization. Globalization is manifest destiny that has been attained…
Download full paperFile format: .doc, available for editing
HIDE THIS PAPERGRAB THE BEST PAPER95.5% of users find it useful 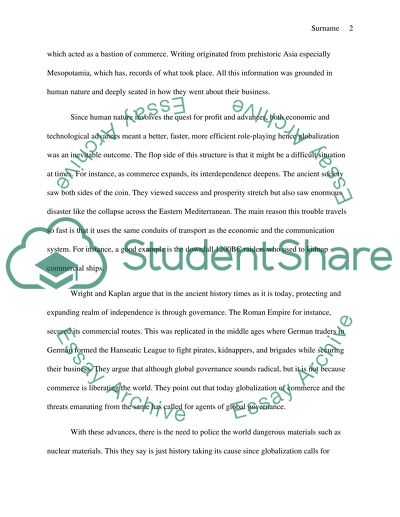 Download file to see previous pages He points out that globalization was sort of pre-destined and inevitable. However, it is not only the ancient societies that resisted globalization but also neo-conservative societies like China abound were against it. The solution to this might be the need for tough American guidance coercing them towards democracy and stiff international economic competition might be the cure. Wrights states that, as perceived against the scenery of history, manifest destiny is powerful and continuous. He argues that the challenge emerges from history since it is self evident that globalization goes back to ancient history when early expansion of commerce was technologically driven. For instance, the early advances in transportation were an extremely important component in doing deals as well during wars. As such was information technology, which acted as a bastion of commerce. Writing originated from prehistoric Asia especially Mesopotamia, which has, records of what took place. All this information was grounded in human nature and deeply seated in how they went about their business. Since human nature involves the quest for profit and advances, both economic and technological advances meant a better, faster, more efficient role-playing hence globalization was an inevitable outcome. The flop side of this structure is that it might be a difficult situation at times. For instance, as commerce expands, its interdependence deepens. The ancient society saw both sides of the coin. They viewed success and prosperity stretch but also saw enormous disaster like the collapse across the Eastern Mediterranean. The main reason this trouble travels so fast is that it uses the same conduits of transport as the economic and the communication system. For instance, a good example is the downfall 1200BC raiders who used to kidnap commercial ships. Wright and Kaplan argue that in the ancient history times as it is today, protecting and expanding realm of independence is through governance. The Roman Empire for instance, secured its commercial routes. This was replicated in the middle ages where German traders in German formed the Hanseatic League to fight pirates, kidnappers, and brigades while securing their business. They argue that although global governance sounds radical, but it is not because commerce is liberating the world. They point out that today globalization of commerce and the threats emanating from the same has called for agents of global governance. With these advances, there is the need to police the world dangerous materials such as nuclear materials. This they say is just history taking its cause since globalization calls for stringent measures and plans to ensure that the avenues open for expansion of the global economy and technology are not exploited by other forces out to wreck havoc. This is only possible if there are well laid out rudiments of international governance. Wright and Kaplan state that, with the expansion in commerce, growth has not been limited to governance but also of morality. Wright describes morality as acknowledging the humanity of people even amidst the cutthroat activities that entail business. He points out that prehistoric relations featured open hostility between groups with violence being justified by moral degradation and even dehumanization of victims. Although Wright and Kaplan slightly differ in their emphasis of morality, the key points bring them together and they tend to agree on the major ...Download file to see next pagesRead More
Share:
Tags
Cite this document
(“Assignment Example | Topics and Well Written Essays - 1500 words”, n.d.)
Assignment Example | Topics and Well Written Essays - 1500 words. Retrieved from https://studentshare.org/other/1401827-assignment
(Assignment Example | Topics and Well Written Essays - 1500 Words)
Assignment Example | Topics and Well Written Essays - 1500 Words. https://studentshare.org/other/1401827-assignment.
“Assignment Example | Topics and Well Written Essays - 1500 Words”, n.d. https://studentshare.org/other/1401827-assignment.
Comments (0)
Click to create a comment or rate a document

While I have been learning French for years, yet, only basic concepts like the meanings, pronunciations, and basic grammar rules are concerned, I want to understand more about the linguistic aspect, especially the morphological one, of the language. This includes the formation processes of French words and how the French internet languages are different from the traditional word-formation processes. I as well want to discover new information on the computer-mediated languages to improve my informal understanding of both English and French. I am also eager to learn more about the morphological word formation so that I can become a better language teacher.
Linguists categorize words as the small units of syntax within a given l...
12 Pages(3000 words)Assignment
sponsored ads
Save Your Time for More Important Things
Let us write or edit the assignment on your topic "Assignment" with a personal 20% discount.
GRAB THE BEST PAPER