Comments (0)
Add to wishlist Delete from wishlist
Cite this document
Summary
Running Head: HOSPITAL BIRTH VS. HOME BIRTH Hospital Birth vs. Home Birth Instructor Date Introduction Pregnant women may prefer different settings for delivery depending on which they are most comfortable with and which provides minimum risk to them and the unborn children…
Download full paper File format: .doc, available for editing
HIDE THIS PAPERGRAB THE BEST PAPER94% of users find it useful 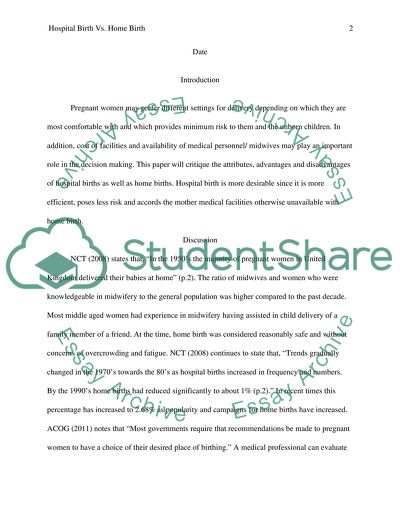 Download file to see previous pages Discussion NCT (2008) states that, “In the 1950’s the majority of pregnant women in United Kingdom delivered their babies at home” (p.2). The ratio of midwives and women who were knowledgeable in midwifery to the general population was higher compared to the past decade. Most middle aged women had experience in midwifery having assisted in child delivery of a family member of a friend. At the time, home birth was considered reasonably safe and without concerns of overcrowding and fatigue. NCT (2008) continues to state that, “Trends gradually changed in the 1970’s towards the 80’s as hospital births increased in frequency and numbers. By the 1990’s home births had reduced significantly to about 1% (p.2).” In recent times this percentage has increased to 2.68% as popularity and campaigns for home births have increased. ACOG (2011) notes that “Most governments require that recommendations be made to pregnant women to have a choice of their desired place of birthing.” A medical professional can evaluate and examine a pregnant woman and suggest a place of birth for the woman explaining his or her recommendation based on medical grounds to her. The key factors to be considered when choosing between home birth and hospital birth are the safety of the procedure, the sense of security of the mother and the level or sense of control. According to ACOG (2011), “Women who inquire on planned home births at medical facilities should be adequately informed of its benefits and possible risks.” This information should be based on current and documented evidence. The advising party should clearly note to the mother that although the possible risks associated with home birth may be minimal, home birth is closely associated with increased risk of neo natal death. The risk of neo natal death is two to three fold that of hospital birth. To achieve a successful and reduced-risk planned home birth, the woman requires selecting suitable candidates for the home birth. “A nurse certified in midwifery, physician or midwife who is qualified and aptly practices within regulations set by the local medical body should be available” (ACOG, 2011). The intended candidate should also be available for consultations. Safe, easy and timely access to a hospital or medical facility should be possible at the slightest chance of complications occurring. An easy access to hospital should provide contingency in case complications develops and the mother and or infant require emergency medical attention. ACOG (2011) states, “At present, the United States records an approximate figure of 25,000 home births annually.” From this figure, a quarter of the births is not attended to and is unplanned due to the spontaneity or unexpected labor. On average, the fraction of women who initially plan and intend to deliver at a hospital, those women who fail to make provisions for the attendance of a certified medical professional in midwifery, and unplanned homebirths record high rates and instances of neo natal and pre natal deaths. Women should plan for any eventuality and sudden changes in original or intended plans. The lack of transport to the designated/ planned hospital may warrant a home birth. In case no provisions were made to equip the home or vicinity/ surrounding with equipment and tools of delivery, the woman runs the risk of infection to ...Download file to see next pages Read More
Share:
Tags
Cite this document
(“Hospital Birth vs. Home Birth Essay Example | Topics and Well Written Essays - 1250 words”, n.d.)
Retrieved from https://studentshare.org/nursing/1453244-hospital-birth-vs-home-birth-critical-thinking

CHECK THESE SAMPLES OF Hospital Birth vs. Home Birth

...Running Head: FP (IRAN) V. SECRETARY OF FOR THE HOME FP (Iran) V. Secretary of for the Home Department of Institution) Critical Assessment of significance of the case of “FP (Iran) V. Secretary of State for the Home Department” in the development of Administrative Law Introduction With the advent of civilisation and the law making process, it has been the endeavour of man to ensure that Rule of Law prevails in all decisions made in disputes. Judges have accepted time and again that just as everybody has certain rights that are subject to prevailing laws, so also all officials upholding the law have a responsibility to ensure that they shall not commit any act without proper justification. Administrative Law is a set of governing principles...
8 Pages (2000 words) Assignment

The Birth of a Nation by D.W. Griffith

...The birth of a Nation is a silent film that is directed by D. W. Griffith in the year 1915, which is based on when America went through a civil war, as well as the aftermath that occurred thereafter. It was inspired by The Clansman, which is also a novel and play. This film is quite well known for its awesome effects, camera tricks, and its lighting, and it also caused a great deal of controversy in that it positively portrays the Ku Klux Klan (American Movie Classics Company LLC). Griffith is quite creative in how he transforms the military opposition between the North and South to the opposition between Blacks and Whites. The film begins during the prewar times. The American civil war has not yet begun. The film turns its focus on two...
6 Pages (1500 words) Movie Review

... Essay, Other Introduction The people and Pakistan and Bangladesh suffer from many identical problems. If the creation of Pakistan can be compared to a normal delivery, the creation of Bangladesh is a cesarean delivery. In both the courtiers people suffered immensely, with the loss of democratic rights, with military rule imposed intermittently. Yet religion of Islam is the strong binding force for the people and they think, their religion alone bring about all-round prosperity in their secular life and take care of their afterlife. The Birth of Pakistan “The British Parliament passed the Indian Independence Act on July 18, 1947. The Act created two dominions, Indian Union and Pakistan… The Muslims of the Sub-continent had finally...
10 Pages (2500 words) Assignment

The main differences between the approaches made by American society and the Barbarian society were the purpose behind the invasions. The American society invaded Afghanistan after facing violent attacks from the Islamic anti-social groups. However, the Barbarian invasions in Rome signified the use of power by the leaders in order to capture territories and increase their kingdom. The main purpose behind the attacks made by the U.S. administration was to eliminate the terrorist groups from the world and make the world free f...
10 Pages (2500 words) Essay
sponsored ads
Save Your Time for More Important Things
Let us write or edit the essay on your topic "Hospital Birth vs. Home Birth" with a personal 20% discount.
GRAB THE BEST PAPER

Let us find you another Essay on topic Hospital Birth vs. Home Birth for FREE!