Comments (0)
Add to wishlist Delete from wishlist
Cite this document
Summary
An essay "Critical Appraisal of Pereira Da Silva; SS Obesity Meanings" outlines that it started by tackling the background information and utilized a qualitative approach to understand how the morbid obese conceptualizes and deals with obesity and obesity treatment. …
Download full paper File format: .doc, available for editing
HIDE THIS PAPERGRAB THE BEST PAPER96.8% of users find it useful 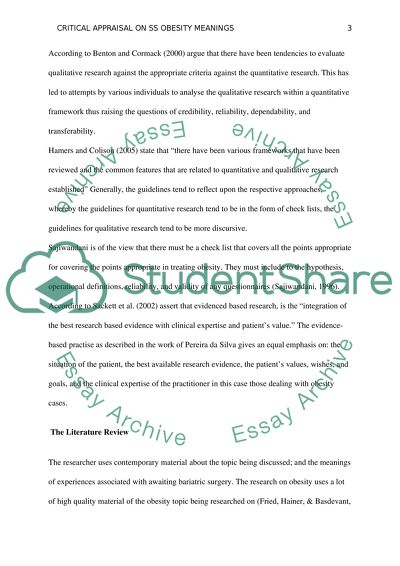 Download file to see previous pages Therefore, the study explored the expectations and the beliefs regarding the exigencies and the impacts of bariatric surgery (Bowling, 2009:56-58). The methods included a study population comprised of 30 morbidly obese patients. The results were based on three core themes namely: eating behavior, treatment, and obesity. Critical appraisal is an integral process in the evidence-based practice. The aim of critical appraisal is aimed at identifying the methodological flaws in the literature besides, providing the consumers of research evidence with the opportunity to make informed decisions regarding the quality of the research evidence (Trinder & Reynolds, 2000:69-72). The critical appraisal for both the quantitative and qualitative research is appropriate. Developing a critical appraisal framework for healthcare services allows for the need to have competent healthcare treatment for obesity. Therefore, health professionals are required to be intelligent consumers of research, and this entails the ability to publish research something which Pereira da Silva has accomplished. According to Benton and Cormack (2000) argue that there have been tendencies to evaluate qualitative research against the appropriate criteria against the quantitative research. This has led to attempts by various individuals to analyze the qualitative research within a quantitative framework thus raising the questions of credibility, reliability, dependability, and transferability. Hamers and Colison (2005) state that “there have been various frameworks that have been reviewed and the common features that are related to quantitative and qualitative research established” Generally, the guidelines tend to reflect upon the respective approaches, whereby the guidelines for quantitative research tend to be in the form of checklists, the guidelines for qualitative research tend to be more discursive. Sajiwandani is of the view that there must be a checklist that covers all the points appropriate for covering the points appropriate in treating obesity. They must include the hypothesis, operational definitions, reliability, and validity of any questionnaires (Sajiwandani, 1996). According to Sackett et al. (2002) assert that evidenced-based research is the “integration of the best research-based evidence with clinical expertise and patient’s value.” The evidence-based practice as described in the work of Pereira da Silva gives an equal emphasis on the situation of the patient, the best available research evidence, the patient’s values, wishes, and goals, and the clinical expertise of the practitioner, in this case, those dealing with obesity cases. The Literature Review The researcher uses contemporary material about the topic being discussed; and the meanings of experiences associated with awaiting bariatric surgery. The research on obesity uses a lot of high-quality material of the obesity topic being researched on (Fried, Hainer, & Basdevant, 2007:267). This led to the development of the research question thus allowing the hypothesis testing and identification of the appropriate method of data collection. Data collection involved the use cognitive interviews, questionnaires, open-ended questions, and the focus groups. The interviews were audio-taped, transcribed, and the coded according to the ground analysis methodology.  ...Download file to see next pages Read More
Share:
Tags
Cite this document
(“Critical Appraisal of Pereira Da Silva; SS Obesity Meanings Essay”, n.d.)
Retrieved from https://studentshare.org/nursing/1404467-critical-appraisal-of-qualitative-research

With this definition in mind, managing diversity represents the elements of embracing and incorporating a wide variety of human differences (or commonalities) into the daily practice of business so as to provide enhanced benefit to the entire workplace and its processes. The goal of managing diversity is for leadership and subordinates alike to take a rather proactive approach to building enhanced inter-personal relationships and then applying this harmony to goals of higher productivity and teamwork.
...
11 Pages (2750 words) Term Paper

Leonardo da Vinci is best described as one of the greatest minds of the Renaissance. He was born in a period of great cultural change and achievement in Europe that spanned the period from the end of the 14th century to about 1600, marking the transition between Medieval and Early Modern Europe. He was a multi-talented artist-scientist who excelled in various fields as a painter, sculptor, architect, engineer, and scholar. “Leonardo was one of the greatest men of science in history, but the world which admired him as an artist did not discover the man of science until many centuries after his death” (Dibner, 380).

The authors have referred to appropriate and adequate works. The author referred to an explicit range of databases and periodicals. A wide period range was covered as literature review was done of proceedings of the Society or Pediatric Research from 1990 to May 2006.No language restrictions were set as the author referred to the translated version of one trial published in German (Schrod 1993) as well. References of included studies were also reviewed. The literature review also included Grey literature identified by hand searching the proceedings the Society for Pediatric Research Conference published from 1990 to May 2006.
The relevance of the studies included was partial. The standard search strategy of the Cochrane Neona...
14 Pages (3500 words) Literature review

Considering the goals and objectives of the organization, the various factors that have influenced the aspect of voting in favor of the emerging markets have been determined in this research paper. The critical evaluation of FIFA’s decision in awarding the emerging markets with the hosting rights of the Football Cup has been done by determination of the extent to which the goals and objectives of the governing body have been fulfilled with this decision (Baade and Matheson, 2004, p.353). The research problem also established the fairness of the World Cup Bidding Process and the basis of the FIFA Executive Committee’s decision in awarding the Football World Cup hosting to the developing countries. In order to analyze th...
29 Pages (7250 words) Dissertation
sponsored ads
Save Your Time for More Important Things
Let us write or edit the essay on your topic "Critical Appraisal of Pereira Da Silva; SS Obesity Meanings" with a personal 20% discount.
GRAB THE BEST PAPER

Let us find you another Essay on topic Critical Appraisal of Pereira Da Silva; SS Obesity Meanings for FREE!