Comments (0)
Add to wishlistDelete from wishlist
Cite this document
Summary
Metals loose electrons forming positive ions known as cations. There are various properties of metals. These properties can either be chemical properties or physical…
Download full paperFile format: .doc, available for editing
HIDE THIS PAPERGRAB THE BEST PAPER94.4% of users find it useful 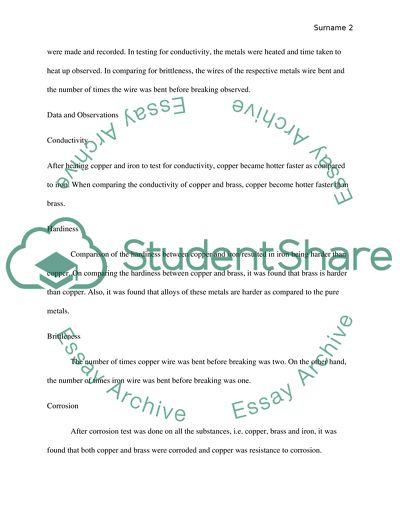 September 8, Metals and Corrosion Experiment Introduction A metal is defined as substance containing high electrical conductance, which has luster and is malleable. Metals loose electrons forming positive ions known as cations. There are various properties of metals. These properties can either be chemical properties or physical properties. On the other hand, corrosion of metals is the process by which the surface of a metal or its related materials deteriorates as a result of the metal losing electrons and remaining with positively charged ions. Reaction of Iron III oxide with water in presence of air results in the formation of iron II oxide which is referred to as rust. This is an indication of corrosion in the given metal. This experiment’s main purpose is the determination of the properties of metals and to find out the corrosive effect on metals.
Experimental
Metal Properties
The properties of the metals, iron, brass and copper, were compared. This involved comparing the conductivity of both iron and copper, Hardiness, and brittleness. The observations were made and recorded. In testing for conductivity, the metals were heated and time taken to heat up observed. In comparing for brittleness, the wires of the respective metals wire bent and the number of times the wire was bent before breaking observed.
Data and Observations
Conductivity
After heating copper and iron to test for conductivity, copper became hotter faster as compared to iron. When comparing the conductivity of copper and brass, copper become hotter faster than brass.
Hardiness
Comparison of the hardiness between copper and iron resulted in iron being harder than copper. On comparing the hardiness between copper and brass, it was found that brass is harder than copper. Also, it was found that alloys of these metals are harder as compared to the pure metals.
Brittleness
The number of times copper wire was bent before breaking was two. On the other hand, the number of times iron wire was bent before breaking was one.
Corrosion
After corrosion test was done on all the substances, i.e. copper, brass and iron, it was found that both copper and brass were corroded and copper was resistance to corrosion.
Discussion
Copper has a higher conductivity as compared to iron and brass. This is due to the fact that copper contains a large number of de – localized electrons. These electrons move freely and as a result facilitate the conductivity process.
From the experiment, it’s clear that iron is harder than copper. This is due to the strong covalent bonds which exists between the iron molecules making it to be harder than copper. Comparing the two pure metals with its alloys resulted in the alloys being harder than the metals. On brittleness, iron was found to be more brittle than copper.
Iron and brass was found to be easily corroded as compared to the pure copper. This was due to the presence of iron III oxide which gets oxidized to iron II oxide, and this causes rust.
Conclusion
It can be concluded that copper has high conductivity as compared to iron, copper is more corrosion resistance than iron and iron is more brittle than copper. The alloys of the metals have enhanced properties as compared to the pure metals. Finally, Copper was found to be corrosive resistant as compared to iron and brass. Read More
Share:
Tags
Cite this document
(“Chimestry Lab Report Example | Topics and Well Written Essays - 500 words”, n.d.)
Chimestry Lab Report Example | Topics and Well Written Essays - 500 words. Retrieved from https://studentshare.org/miscellaneous/1617458-chimestry

CHECK THESE SAMPLES OF Chimestry

BMW of Leadership and Management

...?Running Head: Leadership and Management: BMW Leadership and Management: BMW [Institute’s EXECUTIVE SUMMARY The purpose of thisreport is to provide a detailed analysis of the BMW current market position and what future strategies its executives for further growth can adopt. This report will help the decision makers to evaluate the current and future positioning of the company under the company’s current market analysis with respect to its strengths, weaknesses, opportunities, and threats. The reports also highlights the structure, conduct and performance of the company’s human resources and finally recommend the strategic steps that can be taken for further improvements relating to management, development and implementation... Head: Leadership and...
20 Pages(5000 words)Essay

...? APA Skills and the No Child Left Behind Act APA Skills and the No Child Left Behind Act Review of the Master’s of Artsin Education Program My name is NgocTien Nguyen and I am a student in the Master of Arts in Education (MAED) program at Ashford University. The MAED Program Learning Outcome that intrigues me the most is the Higher Education Program. Being a life long learner myself, I understand and realize the importance of education. Higher education provides adults with the opportunity to excel in their career and to pursue their professional dreams and ambitions. As I begin the program at Ashford, I am struck with the reality that I want to influence others to achieve greatness in their life. One way to begin this is by earning... APA Skills and...
4 Pages(1000 words)Essay

...Akashi- Kaikyo bridge (Pearl bridge), Japan Seventeen long-span bridges, including ten suspension bridges, five cable-stayed bridges, one arch bridge, and one truss bridge, connect the main island of Honshu with the southern island of Shikoku in Japan. The Akashi Kaikyo bridge across the Akashi Strait, perhaps the longest suspension bridge in the world, is one of them. It forms a part of the 81-kilometre-long Kobe-Naruto highway and links Maiko, in Kobe, and Matsuho, on Awaji Island. The Akashi Kaikyo Bridge is known in Japan as the Pearl Bridge. Before the bridge became operational, the people had to mainly depend on ferry services to travel between the islands. The ferry travel was uncertain and rather dangerous as the area often... Kaikyo bridge...
5 Pages(1250 words)Research Paper

...NATIONAL SECURITY STRATEGY of Affiliation NATIONAL SECURITY STRATEGY There is need to embed moral values and principles in in an overall national security strategy. America was found on a number of values and principles that are deeply enshrined in its constitution. Key amongst the values is the moral responsibility, first to her citizens, then to the rest of the world. In emancipation proclamation, Abraham Lincoln calls for equality of treatment of all men regardless of race, gender, religion, place of origin, or social status. Similarly, in pursuit of national interests, the American values advocate for justice and equality based on the internationally recognized laws. The same applies to President Eisenhower’s in his farewell address... SECURITY...
2 Pages(500 words)Essay

...Corporate Governance Introduction Corporate governance is a practice that aspires to assign business resources in an approach that capitalizes on value for all stakeholders of the company. They are the shareholders, financier, investors, workers, clients, trader, contractors, environment and the society at large and they stand at the driving position to account by assessing their judgments on precision, inclusivity, justice and accountability (La Porta, et al., 2000). The World Bank classifies governance as the implementation of political power and the utilization of institutional properties to direct societys affairs and problems (Raut, nd). The Agency theory comes into place when the conflict of interest takes place between the principal... Governance...
8 Pages(2000 words)Essay
sponsored ads
Save Your Time for More Important Things
Let us write or edit the lab report on your topic "Chimestry" with a personal 20% discount.
GRAB THE BEST PAPER

Let us find you another Lab Report on topic Chimestry for FREE!