Comments (0)
Add to wishlistDelete from wishlist
Cite this document
Summary
The other aim is to determine the conditions necessary for rusting to occur. The process of corrosion requires certain conditions, which must be present. The conditions…
Download full paperFile format: .doc, available for editing
HIDE THIS PAPERGRAB THE BEST PAPER98.7% of users find it useful 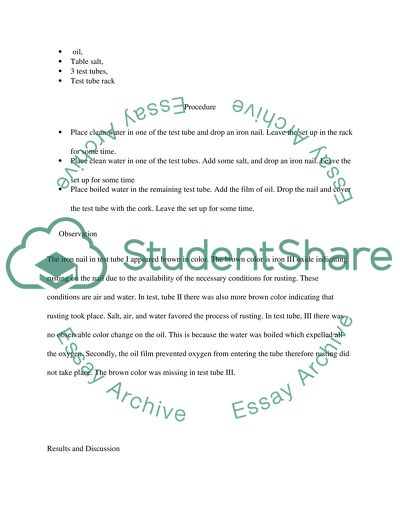 Extract of sample "Metals and corronslon"

Metals Tittle: Metals Objectives a) To determine conditions necessary for rusting b) To determine electrical conductivity ofIron, Copper, and Brass
c) To determine the brittleness and hardness of copper, brass, and iron
Introduction
The aim of this laboratory experiment is to determine the rate of reaction between copper, brass, and iron. The other aim is to determine the conditions necessary for rusting to occur. The process of corrosion requires certain conditions, which must be present. The conditions include oxygen and water. There is also the measurement of rate of electrical conductivity between these metals. The experiment also measures the brittleness of these metals.
Materials
Boiled water
pure clean water,
3 iron nails,
cork,
oil,
Table salt,
3 test tubes,
Test tube rack
Procedure
Place clean water in one of the test tube and drop an iron nail. Leave the set up in the rack for some time.
Place clean water in one of the test tubes. Add some salt, and drop an iron nail. Leave the set up for some time
Place boiled water in the remaining test tube. Add the film of oil. Drop the nail and cover the test tube with the cork. Leave the set up for some time.
Observation
The iron nail in test tube I appeared brown in color. The brown color is iron III oxide indicating rusting on the nail due to the availability of the necessary conditions for rusting. These conditions are air and water. In test, tube II there was also more brown color indicating that rusting took place. Salt, air, and water favored the process of rusting. In test tube, III there was no observable color change on the oil. This is because the water was boiled which expelled all the oxygen. Secondly, the oil film prevented oxygen from entering the tube therefore rusting did not take place. The brown color was missing in test tube III.
Results and Discussion
From the experiment conducted above, we can clearly conclude that the process of resulting requires the presence of water and air, which is oxygen to be specific. This is the reason why nails in test tube II and I ended up in brown color. Iron nail in test tube III did not rust due to the absence of oxygen (Holleman and Wiberg). Copper is the best conductor of electricity while it is also the most brittle. Brass, which is an alloy of copper and iron, is the harder of the two.
Prevention of Rusting
Rusting can be prevented through various means. One of the methods to prevent rust is by oiling. Oiling prevents entry of oxygen, which is an essential condition necessary for rusting. Painting is also another possible means of preventing rust. Galvanization is the process of applying a coat of layer that is resistant to rust. This process also helps in preventing rust in metals. Method of storage is also amongst the simple ways in which corrosion can be prevented. Ensure that metals are stored in a cool and dry place to prevent rusting.
Conclusion
In conclusion, water and oxygen are the necessary conditions for rusting to occur. The experiment was a complete success showing also the rate of conductivity between brass, copper, and iron. In summary copper is the best conductor of electricity as compared to brass and iron. Painting, coating, galvanizing, and method of storage are some of the ways that can be used to prevent the process of rusting.
Works Cited
Holleman, A. F. and E Wiberg. Inorganic Chemistry. San Diego: Academic Press, 2001. Read More
Share:
Tags
Cite this document
(“Metals and corronslon Lab Report Example | Topics and Well Written Essays - 500 words - 1”, n.d.)
Metals and corronslon Lab Report Example | Topics and Well Written Essays - 500 words - 1. Retrieved from https://studentshare.org/miscellaneous/1617406-metals-and-corronslon

CHECK THESE SAMPLES OF Metals and corronslon

Atoms of metals and LIDAR

...?Atoms of Metals and LIDAR Introduction Every day, one hundred metric tons of meteor debris enters the Earth’s atmosphere – generally in the form of metallic sodium, iron, silicon, potassium, magnesium, and calcium particles less than 1mm in diameter. When combined with high temperature in the upper atmosphere, these particles vaporize and form the Atomic Metal Layers located 80 to 105 kilometres above the Earth’s surface (ATHENA Research and Innovation Centre n. pag.). The Sodium Layer was discovered in 1929 by Vesto Melvin Slipher. Since then, other layers have been discovered such as iron, potassium, and calcium (Keese n. pag). Majority of observations on atomic metal...
8 Pages(2000 words)Essay

...? Apache Metals, Inc. Case Study Introduction Apache Metals is an incorporated company that deals with manufacturing metal equipment for different industries. The company has been facing issues with their project management team thus making it incapable of getting funds from donors for running their projects. The company’s production lines are tailor made to suit customer’s requirements, application and the industry, but because of inefficient team managers, the company has been failing to receive funding. The project managers for each of the production lines have been failing on their job and the senior management has contributed to the failure of the project managers. The fact that project managers can come from anywhere within... that...
6 Pages(1500 words)Essay

Mechanical testing of metals and polymers

...? MECHANICAL TESTING OF METALS AND POLYMERS By Introduction The procedure of various engineering properties which include polymers and ferrous metal is contained in this lab report. Steel with a carbon content of that range from 0.1 percent to 0.85 percent is the ferrous metal, and the polymers included the PVC and polypropylene that were under investigation in this experiment. The experiment was because a materials mechanical property is extremely dependent to the materials chemical composition. The experiment was then sought to strengthen the fact by caring out test on steel’s and polymers mechanical properties, which included tensile strength, hardness, impact test, percentage...
5 Pages(1250 words)Assignment

...INTRODUCTION Welding is a fabrication process that joins materials, usually metals or thermoplastics, by causing coalescence. This is often done by melting the work pieces and adding a filler material to form a pool of molten material that cools to become a strong joint, but sometimes pressure is used in conjunction with heat, or by itself, to produce the weld. (www.wikipedia.org). A weld is defined as a blend or coalescence of two or more metals by heating then until they reach a critical temperature and flow together. The piece of metal to be welded is called the base metal, work piece, or work. The edges of the base metal are often specially prepared...
10 Pages(2500 words)Essay

...Introduction Metals are unique materials in their own right. This is because they posses certain desirable qualities that make them very useful for particular functions. Consequently, these qualities have been able to gain some applications within the sporting industry. Metals are largely used to make sporting equipment and most of them have gained acceptance as they are. However, it should be noted that this application of metals in sport has brought out certain controversies that are related to the injuries created. The paper shall examine some of these issues and a conclusion shall be given on the matter. Application of metals in sports Metals have...
8 Pages(2000 words)Essay

Metals in my life

...Metals always have had immense application in different realms of human life. They are generally defined as opaque, lustrous elements that are good conductors of heat and electricity. The history of metallurgy, the science of metals dates back to 6000 BC. Interestingly this is one of the oldest applied sciences known to mankind. Since these long of years of history, there had been remarkable linkage between the application of metals on the ways and life of human. There were only twenty four metals discovered till the eighteenth century and twelve of them were discovered in the eighteenth century itself. Gold and Copper are considered to be the first metals discovered. However currently there are eighty six known metals. (Source... :...
10 Pages(2500 words)Essay

Extraction of Metals from their Ores Worksheet

...Extraction of Metals from their Ores Worksheet The exercise you are going to complete uses a collection of websites, data tables and charts to lead you through key ideas that you need to in order to understand the relationship between reactivity, price and extraction methods of different metals. You will need to use this template to fill in the tables and answer the questions below. You might find the three websites below useful to refer to. However you must not copy and paste from these websites but write the information in your own words. If I suspect that any information has been copied and pasted I will put it through a program called turnitin and you will lose...
6 Pages(1500 words)Coursework

...September 8, Metals and Corrosion Experiment Introduction Corrosion is as a result of presence of Iron II Oxide. Iron II oxide is formed as a result of oxidation of Iron III Oxide in the presence of Oxygen and moisture. These results in a yellow paste referred to a rust. The formation of the rust eats up the upper most layers in the material a involved and as a resulting, there is corrosion. Metals are substances which lose electrons to form positive ions otherwise known as cations. Metals have different properties depending on the position of a particular metal in the periodic table. The physical properties of metals include: high conductivity, less...
2 Pages(500 words)Lab Report

...Marsh’s Metals Precision Tree Exercise – The Sale (An individual case study report) Dr. Phillip S. Rokicki Qnt. 5040 Weeks Nine and Ten University Name Executive Summary Bob Marsh, the owner of Marsh’s Metals, has acquired 10,000 kilograms of partially refined rhenium ore (Re) for $8,000 per kilogram and estimates that he would be able to sell all the ore for $12,000 or more per kilogram. Bob has two alternatives, sell the 5,000 kilograms rhenium to Fleishman for $13,000 per kilogram or 4,500 kilograms to Huffman for $14,500 per kilogram, and then later sell the remaining ore on the open market for $12,000 per kilogram. The problem is what Bob should do; sell the rhenium to Fleishman or to Huffman, to...
4 Pages(1000 words)Case Study
sponsored ads
Save Your Time for More Important Things
Let us write or edit the lab report on your topic "Metals and corronslon" with a personal 20% discount.
GRAB THE BEST PAPER

Let us find you another Lab Report on topic Metals and corronslon for FREE!