Comments (0)
Add to wishlistDelete from wishlist
Cite this document
Summary
There are cases where much caution and attention is needed to define the outcome of a court case. Basically, the constitution is seen by advocators of judges being interpreters as a laid down…
Download full paperFile format: .doc, available for editing
HIDE THIS PAPERGRAB THE BEST PAPER94.5% of users find it useful 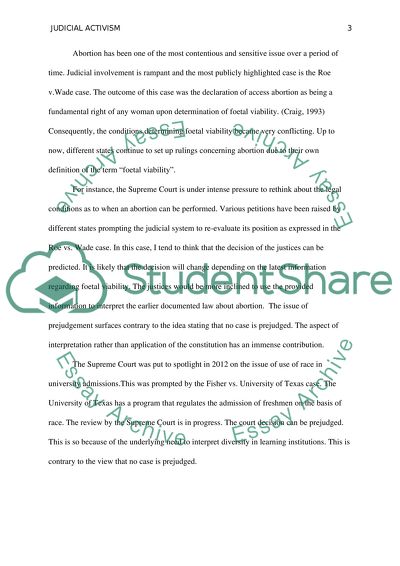 Judicial Activism The issue as to whether judges should interpret or apply the constitution is debatable. There are cases where much caution and attention is needed to define the outcome of a court case. Basically, the constitution is seen by advocators of judges being interpreters as a laid down framework to decide on a case. Scalia (1972) asserts that the constitution is supposed to guide the judge to solve any dilemma with a judicial bearing. To a larger extent, the judicial function incorporates interpretation of the provisions of law. However, there are numerous debates intended to question the manner and extent of interpretation of law by any judge.
By interpreting, the judge is equipped with knowledge to decide what applies in a particular case. The decision must also be constitutional rather than a biased one. (Scalia, 1997)This is what is referred to as strict constructionism or strict constructivism. The judge must first acquire the meaning of a particular clause of the constitution then apply it in the ruling. The use of strict constructionism is recommended where the provisions of the constitution are unclear, ambiguous or absurd.
On the other hand, one may view the constitution as a self-fulfilled set of guidelines to govern any ruling.in the event that there are no ambiguous or the clarity of the provisions is spot on, the judges are expected to strictly apply the exact meaning in the ruling. (Forte, 1972) One of the issues that arise with interpretation of the constitution by the judges is expansion of the laws through implications. Justice, reason and fairness may fail to materialise if the judges fail to restrain from expansion of the law through implication.
Abortion has been one of the most contentious and sensitive issue over a period of time. Judicial involvement is rampant and the most publicly highlighted case is the Roe v.Wade case. The outcome of this case was the declaration of access abortion as being a fundamental right of any woman upon determination of foetal viability. (Craig, 1993) Consequently, the conditions determining foetal viability became very conflicting. Up to now, different states continue to set up rulings concerning abortion due to their own definition of the term “foetal viability”.
For instance, the Supreme Court is under intense pressure to rethink about the legal conditions as to when an abortion can be performed. Various petitions have been raised by different states prompting the judicial system to re-evaluate its position as expressed in the Roe vs. Wade case. In this case, I tend to think that the decision of the justices can be predicted. It is likely that the decision will change depending on the latest information regarding foetal viability. The justices would be more inclined to use the provided information to interpret the earlier documented law about abortion. The issue of prejudgement surfaces contrary to the idea stating that no case is prejudged. The aspect of interpretation rather than application of the constitution has an immense contribution.
The Supreme Court was put to spotlight in 2012 on the issue of use of race in university admissions.This was prompted by the Fisher vs. University of Texas case. The University of Texas has a program that regulates the admission of freshmen on the basis of race. The review by the Supreme Court is in progress. The court decision can be prejudged. This is so because of the underlying need to interpret diversity in learning institutions. This is contrary to the view that no case is prejudged.
References
Craig, B. H., & OBrien, D. M. (1993). Abortion and American politics. Chatham, N.J:
Chatham House.
Forte, D. F. (1972). The Supreme Court in American politics: Judicial activism vs. judicial
restraint. Lexington, Mass: Heath.
Scalia, A., & Gutmann, A. (1997). A matter of interpretation: Federal courts and the law : an
essay. Princeton, N.J: Princeton University Press. Read More
Share:
Tags
Cite this document
(“Judicial Activism Essay Example | Topics and Well Written Essays - 500 words”, n.d.)
Retrieved from https://studentshare.org/miscellaneous/1616429-judicial-activism

CHECK THESE SAMPLES OF Judicial Activism

Judicial activism of the European Court of Justice

...? JUDICIAL ACTIVISM BY EUROPEAN COURT OF JUSTICE . Introduction The European Community Courts have played a decisive role in the integration process of the European Union. The European Court of Justice (ECJ) has especially assumed key role by constantly pursuing legal assimilation in the EU by offering flesh and substance to an outline Treaty, thereby plugging in loopholes in the European laws, and improving the effective implementation of Community law in the provinces of the member states1. In case of ambiguities in the text of the Treaties, ECJ has to employ its creative talents so as to accomplish an acceptable elucidation and application of Community law. ECJ has filled in the gaps and removed the imprecision in the provinces... of...
8 Pages(2000 words)Essay

...ROPER V. SIMMONS Debbie Whitmore Academia-Research, Inc. June 23, 2005 Judicial activism and restraint are points of controversy for politicians, general public and the Supreme Court itself. Judicial activism refers to the court's willingness to become involved in major issues and the extent that it makes decisions based on constitutional grounds. Judicial restraint is when the Court takes the stand that law making is to be left to the legislators and it opposes the nullification of a law only when the Constitution is unquestionably violated. It has been said that 'throughout its history, the Court has claimed to exercise...
4 Pages(1000 words)Essay

...Judicial Restraint and Judicial Activism The doctrine of judicial activism is based on the belief that the federal judiciary is supposed to take an active function by utilizing its powers to examine the activities of the state legislatures, administrative agencies, and the Congress (this is in the case where the aforementioned government bodies go beyond their authority). The Supreme Court acted in an activist manner in the period between 1953 and 1969, and this is in an era when Chief Justice Earl Warren headed the Court. The Warren Court instigated the civil rights onward by suggesting that the laws allowing racial segregation were in violation of the equal protection clause (Bardes, Schmidt, and Shelley 459). On the other hand... , the...
1 Pages(250 words)Essay

...Political Science Political science as a discipline is advantageous for several reasons one of them being the fact that it makes it easy for those who study it to understand the various systems of justice in different parts of the world. In an attempt to ascertain that passion for justice is maintained and that difficult legal situations are managed satisfactorily in the face of all the concerned parties, political science has brought forth several aspects including judicial activism and judicial restraint. This essay aims to provide more insight on some of the differences that exist between judicial activism and judicial restraint....
2 Pages(500 words)Essay

In giving its ruling, the conservative group of the Roberts Court improved the cause of "corporate personhood" through giving large corporations the capacity to drown out the voices of the electorate by the production and circulating of quasi-media messages promoting or demeaning certain political candidates. In giving corporations this power, the Court opened the door to making them the most powerful purveyors of public opinion, devoid of requiring accountability or truthfulness (Manje 102). This is a power that should not be granted to corporations, thus I close this question is support of judicial restraint powers. In Furman v. Georgia, the justices considered the death penalty as a violation of the Fourteenth Amendment because...
4 Pages(1000 words)Assignment

8 Pages(2000 words)Assignment
sponsored ads
Save Your Time for More Important Things
Let us write or edit the essay on your topic "Judicial Activism" with a personal 20% discount.
GRAB THE BEST PAPER

Let us find you another Essay on topic Judicial Activism for FREE!