Comments (0)
Add to wishlistDelete from wishlist
Cite this document
Summary
Portrait photography is a photo of a person or group of persons that show a thought communicated by body language, an impression of one’s character or mood of the subject matter. Areas of attention in the photo are the person’s face, body posture and the entire background of…
Download full paperFile format: .doc, available for editing
HIDE THIS PAPERGRAB THE BEST PAPER96.6% of users find it useful 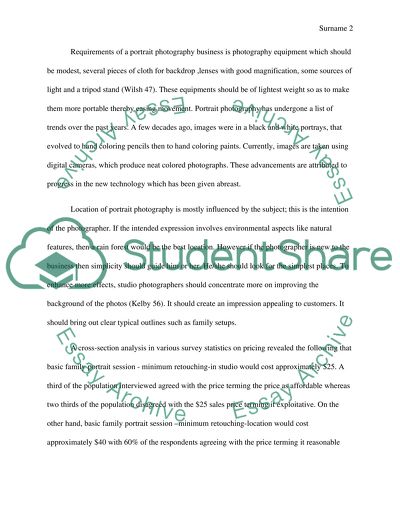 Portrait Photography Survey Portrait photography is a photo of a person or group ofpersons that show a thought communicated by body language, an impression of one’s character or mood of the subject matter. Areas of attention in the photo are the person’s face, body posture and the entire background of the photo. A portrait photo is sometimes artistic and mainly intended for specific occasions. It serves various purposes, from usage in websites for adverts of business to occasions such as weddings and learning institution events such social functions like games. Portrait photos majorly use the influence of visual art to communicate information to intended recipient.
Markets of portrait photography include restaurants, taverns, stores and business premises. These organizations use portrait photos to reach out to their consumers (Kelby 36). This is because portrait photos are more appealing and conspicuous to motorists, pedestrians and other road users as they are normally attractive. Portrait photographers make money by making saleable portraits which they sale them to businesses which use them for advertisement purposes their websites and in local television programs. On the other hand portrait photographers make sales when they are hired to make photo shoots in institutions’ events such as graduations and in special occasions such as in church weddings.
Requirements of a portrait photography business is photography equipment which should be modest, several pieces of cloth for backdrop ,lenses with good magnification, some sources of light and a tripod stand (Wilsh 47). These equipments should be of lightest weight so as to make them more portable thereby easing movement. Portrait photography has undergone a list of trends over the past years. A few decades ago, images were in a black and white portrays, that evolved to hand coloring pencils then to hand coloring paints. Currently, images are taken using digital cameras, which produce neat colored photographs. These advancements are attributed to progress in the new technology which has been given abreast.
Location of portrait photography is mostly influenced by the subject; this is the intention of the photographer. If the intended expression involves environmental aspects like natural features, then a rain forest would be the best location. However if the photographer is new to the business then simplicity should guide him or her. He/she should look for the simplest places. To enhance more effects, studio photographers should concentrate more on improving the background of the photos (Kelby 56). It should create an impression appealing to customers. It should bring out clear typical outlines such as family setups.
A cross-section analysis in various survey statistics on pricing revealed the following that basic family portrait session - minimum retouching-in studio would cost approximately $25. A third of the population interviewed agreed with the price terming the price as affordable whereas two thirds of the population disagreed with the $25 sales price terming it exploitative. On the other hand, basic family portrait session –minimum retouching-location would cost approximately $40 with 60% of the respondents agreeing with the price terming it reasonable (Amyot 81). However 40% of the respondents disagreed with the price terming it too high and that it would be unaffordable.
Basic one person portrait session-minimum retouching –in studio would cost $15. Two thirds of respondents agreed with the price terming it affordable (Baker 62). However, a third responded by saying the price was slightly high. On the other hand a large number of the respondents argued that the price should remain same irrespective of location. In addition, the $25 price of basic one person portrait session-minimum retouching –on location was termed reasonable by 90% of the respondents. They identified additional transport and technical costs to locations as justifying the increased price.
Most people interviewed in the survey prefer light retouching with 20x24 to 16x20 or even 5x7 citing large photographs being more appealing and attractive than smaller ones, despite their prices being relatively higher (Amyot 49). In conclusion most consumers preferred prices to remain stable in their current range with respective minimum retouching specifications. However, substantial fraction of respondents said a variety of locations should be offered to make portraits have alternative setups.
Works Cited
Amyot, Andre. The Art and Techniques of Business Portrait Photography. Philadelphia: Amherst Media Inc, 2009. Print.
Baker, Hunter. The Best of Family Portrait Photography: Survey in Professional Techniques and Images. Philadelphia: Amherst Media Inc, 2007. Print.
Kelby, Scott. Professional Portrait: Retouching Techniques for Photographers Using Photoshop. Pittsburgh: Pearson Education, 2011. Print.
Wilsh, David. Succeed in Portrait Photography. Cambridge: Rotovision Publishing, 2010. Print. Read More
Share:
Tags
Cite this document
(“Portrait Photography Survey Essay Example | Topics and Well Written Essays - 500 words”, n.d.)
Portrait Photography Survey Essay Example | Topics and Well Written Essays - 500 words. Retrieved from https://studentshare.org/miscellaneous/1615824-portrait-photography-survey

...of private facts would be another basis for a tort involving photography. For instance, if one takes a picture of another at an AIDS clinic, and it is clear that this picture was taken at an AIDS clinic, and this picture was published, then this would be public disclosure of private facts, and it would be actionable. Publicity that places another in a false light is another restriction. Perhaps an example of this would be to photograph a teetotaler with a beverage that resembles a beer, when it is actually a non-alcoholic beer. The fourth major restriction is that one cannot take another’s likeness or name to use for one’s own advantage (Krages, 2007). An example of this might be taking a picture of somebody, then...
4 Pages(1000 words)Essay

... Evolution of Photography in USA The concept of photography came into existence with the advent of cameras but the ideology of photography has remained on the society since the period of 5th Century B.C. The concept lingered around until the concept was taken up as an invention by a scientist from Iraq who came up with the first camera which was recognized as camera obscura and this took place during the period of 11th Century. The photography that is witnessed in the world of 21st century came into existence during the period of 1830s when a France born individual named Joseph Nicephore Niepce first utilized a portable version of camera obscura in order to take a picture of a pewter plate which was covered with bitumen (Hirsch 8... ...
3 Pages(750 words)Research Paper

...Throughout the past decade the industry of design has continued its assimilation of digital technologies. Reasons for using digital solutions lie clearly on the surface: they are cheap to use, easy to control, and offer unmatched quality. Design has become cheaper and essentially the market has grown significantly. "500,000 jobs were classified by the Bureau of Labor and Statistics (BLS) as "designers" or related titling in the year 2000. This was an increase of over 200% from the Graphic Artists Guild survey reports of the mid-1980s" (Carlson 2003). Thus, the industry is thriving with the help of technology. At the same time graphic design becomes more dependent on technology. The US survey of the...
6 Pages(1500 words)Essay

...invention. But it was used for many painters as an ally. They used it as a medium for doing things they could not do before like capturing a street scene. It also helped them in easing the painting of portraits as they didn't require long sessions of modeling after the arrival of Photography. According to Alain Briot (2005), Photography is "both an art and a science". He explains that "Photography allows us to express our feeling and emotions, but to do so we need to master the scientific part of the medium. Unlike a painter, who is in direct contact with his subject and his canvas, a photographer is separated from his subject by the camera and from his "canvas" by...
38 Pages(9500 words)Coursework

...Wedding Photography Survey Question Wedding photography refers to photography activities, which take place in weddings. It includes photographs of the couple prior to marriage for portrait displays, announcements or thank you cards, as well as reporting of the ceremony, and reception. The reception is, at times, referred to as the bridal breakfast in non-US nations (Baatz 25). Wedding photography is a key commercial venture, which supports the bulkiness of the efforts for a lot of photography studios or self-sufficient photographers. Similar to the knowledge of taking photos itself, the practice of wedding...
2 Pages(500 words)Essay

...This article endeavors to respond to Carol Armstrong’s article, “Biology, Destiny, Photography: Difference according toDiane Arbus.” Photography is helpful to human in a number of ways. According to this article, there is difference between photography, destiny and biology has it has been argued by a renown photographer, Diane Arbus. Photography has a myriad of implications to humans since the creation of humanity. However, the problem is the rampant flaws that are associated with the impression created by photographs. Armstrong is very clear in drawing a distinction of Arbus photography from those of the modern ones. Arbus has successfully constructed...
2 Pages(500 words)Essay

...Photography Part The Canon EOS 550D camera was released in early by Canon as a digital 18.0-megapixel single reflex camera. Known as the EOS Rebel T2i and the EOS Kiss X4 in the Americas and Japan respectively, it was the successor of the EOS 500D. A digital camera’s image sensor format is the determinant of the view of specific lenses when used in combination with a particular camera (Guncheon 12). The camera has a reflex mirror covering the CMOS sensor that has gapless micro-lenses. The sensor is able to significantly increase the capability to gather light due to the lack of dead gaps between the lenses that are positioned on top of the 18 million pixels. The image sensor featured in CMOS is smaller than the 22.3 mm ×...
4 Pages(1000 words)Coursework

Selfie as a Type of a Modern Photography

...﻿Over the recent years, photography has developed to become broadly practiced as an amusement and this means that unlike other forms of art, it is not perceived as an art by most people and is now a social rite as well as a tool of power. The earliest use of photography was capturing and memorizing achievements of different individuals such as weddings and it continues to be an integral part of this ceremony. Presently, most of the households have a camera especially the households that have children and photography assists these households to achieve an imaginary possession of the past they experienced when the photos were being taken. A Selfie can be defined as a...
6 Pages(1500 words)Essay
sponsored ads
Save Your Time for More Important Things
Let us write or edit the essay on your topic "Portrait Photography Survey" with a personal 20% discount.
GRAB THE BEST PAPER

Let us find you another Essay on topic Portrait Photography Survey for FREE!